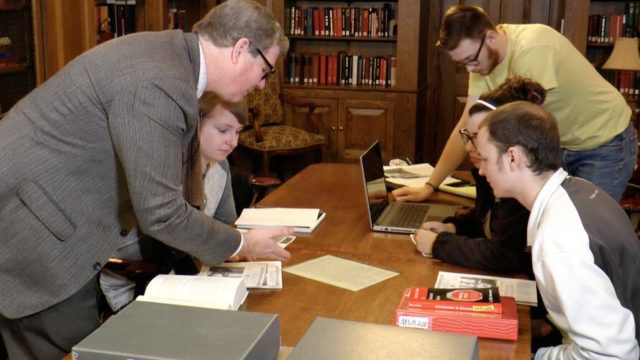 Recently discovered essays by Sir Winston Churchill at the National Churchill Museum at Westminster College here reveal the great statesman and orator also thought much like a scientist as he pondered extraterrestrial life in the universe, the human body, and “the river of life,” it was announced today.

The type-written essays, written in 1939 and slightly revised by Churchill in the mid-1950s, were recently discovered by Sandra L. and Monroe E. Trout Museum Director and Chief Curator Timothy Riley among four boxes of Churchill material that had been donated to the museum three decades ago by Wendy Reves after the death of her husband, Churchill’s publisher, Emery Reves.

At the time of their discovery, Riley was researching Churchill’s paintings for a traveling exhibit hosted by the Museum, but because the just-found documents did not pertain to that research, Riley set them aside. In May, he had an opportunity to begin conducting research to determine the essays’ authenticity and scientific validity.

The titles of the three recently found essays are “Are We Alone in the Universe?” “Mysteries of the Body,” and “River of Life.”

While research on the latter two essays is underway, the first essay has been recently studied by astrophysicist Dr. Mario Livio, who recently spoke at Westminster College’s Hancock Symposium.

Livio validated Churchill’s scientific interest in the universe and its celestial bodies. He was so amazed by Churchill’s insight, he wrote an article titled “Winston Churchill’s Essay on Alien Life” that was published today in the prestigious science journal, Nature.

“Renaissance man that he was, Churchill was keenly interested in science,” Livio said. “For example, he was the first British prime minister to hire a science advisor, and made the UK a friendly environment for science and scientists. In this essay, Churchill makes a case for the possibility of intelligent life on Mars and Venus because their environments, he believed, could sustain life.”

Livio said Churchill speculated in the 11-page essay about the probability that other stars do host planets. “Churchill wrote ‘We know there are millions of double stars, and if they could be formed, why not planetary systems? I am not sufficiently conceited to think that my sun is the only one with a family of planets,’”

Churchill also stated that he saw great opportunity for space exploration. “One day, possibly in the near future, it may be possible to travel to the moon, or even to Venus or Mars,” he wrote 30 years before Neil Armstrong became the first person to walk on the Moon.

Other key points in “Are We Alone in the Universe?”

— Given the vastness of the Universe, Churchill said it is hard to believe that humans on Earth represent something unique.

— He defines the most important characteristic of life as the ability to “breed and multiply.”

— After noting that some viruses can be crystallized, making them hard to categorize, he decides to concentrate on “comparatively highly-organized life,” presumably multicellular life.

— “All living things of the type we know require water,” he wrote. Other life-sustaining liquids cannot be ruled out, he stated, but “nothing in our present knowledge entitles us to make such an assumption.”

— Churchill also defined what is known today as the “habitable zone” — a narrow region around a star that is neither too cold nor too hot, so that liquid water may exist on the surface of a rocky planet. He stated that life can survive only in regions “between a few degrees of frost and the boiling point of water.”

— He concludes that Mars and Venus are the only places in the Solar System besides Earth that could sustain life.

On a more sobering note, Churchill concluded the essay by writing: “I, for one, am not so immensely impressed by the success we are making of our civilization here that I am prepared to think we are the only spot in this immense universe which contains living, thinking creatures, or that we are the highest type of mental and physical development which has ever appeared in the vast compass of space and time.”

“He had a tremendous intellect,” Akande said. “Even though Great Britain was on the brink of war at the time, Churchill continually educated himself and wrote thought-provoking essays that demonstrated his leadership beyond government and military affairs, but also in science.”

On February 16, the National Churchill Museum will begin exhibiting several pages of the essay for the public’s benefit and enjoyment.

Riley said Churchill was the 20th Century’s greatest leader, but he also was a huge advocate of science.

For example, during World War II, he was the first prime minister to provided government-funded science laboratories, telescopes, technology development, and new inventions in fields from molecular genetics to X-ray crystallography. He also supported the development of radar, Britain’s nuclear program, and was intrigued with fusion power, using hydrogen and helium to power vehicles, and other seemingly radical science to benefit mankind.

And, he met regularly with renowned scientists, and trusted their knowledge to help protect Great Britain and defeat dictator Adolph Hitler and the Nazis during WWII.

Like Livio, Riley speculated that the newly discovered essays written in 1939 were simply set aside after Hitler and the Nazis invaded Poland and threatened Europe, prompting Great Britain to declare war on Germany.

In 1946, shortly after the war, Churchill visited Westminster College with U.S. President Harry Truman, and Churchill delivered what is now known as his ‘Iron Curtain’ speech, which started the Allied nations’ Cold War against the Soviet Union and its planned expansion across Europe. Churchill’s speech put Moscow on notice, sent shockwaves around the world, and put Westminster College on the global stage.

In closing his review of Churchill’s essay, Livio stated that “Churchill was a science enthusiast and advocate, but he also contemplated important scientific questions in the context of human values.

“Particularly given today’s political landscape, elected leaders should heed Churchill’s example: appoint permanent science advisers and make good use of them,” he noted.

A brief video of this discovery is available for your free and clear use. Photos also are available by clicking here.