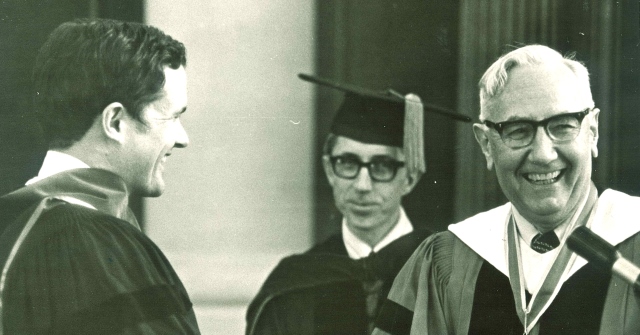 A new president arrived at Westminster on the eve of the 20th Century in the person of John H. MacCracken.  Young and energetic at age 23, MacCracken came from New York, where his father headed New York University.  He accepted a salary of $1500 a year (the faculty were making $1000) and promptly set about expanding the campus beyond the confines of the old Westminster Hall.  In doing so,  he set the pattern for all of his 20th Century successors, who became builders where their predecessors had been sustainers.  During his four year tenure (1899-1903), he would secure funding for the old Science Hall (now Newnham Hall) to house that growing program.  Funded with a $20,000 endowment from the widow of a prominent Presbyterian layman, it was designed by Theodore Link, one of the most noted public building architects of that period.  MacCracken then worked to expand the Board of Trustees to include any Presbyterian and thus brought the two synods of the Missouri church (which had been separated by the Civil War) to the college’s support.  To commemorate this achievement,  the churches and others contributed sufficient funds to build the college’s first dormitory, ReUnion Hall.

MacCracken’s  success would drive the four  presidents who followed him  to emulate his efforts as they literally wore themselves out with their fundraising efforts .  Indeed, one of them, Elmer E. Reed, died of exhaustion in Washington West House in 1926, worn out by his eleven-year tenure.    In the process, the college prospered.  Endowment increased by 264 percent, and new buildings and facilities continued to appear along the hilltop.  Priest Field was opened in 1904 and the presidents finally had a home on campus when Washington West House was dedicated in 1907.

Tragedy struck on the night of September 10, 1909, when the old Westminster Hall was destroyed by fire.  Only the Columns remained.  Makeshift arrangements were made for classes in ReUnion Hall, but enrollment proved disappointing.  Nevertheless, President David Kerr (1904-1911) and the Board set out to establish a long term plan for replacing the structure and continuing to expand the campus.  They spurned an offer to move the college to Hannibal, and with the full support of the Fulton and Callaway communities, a new Westminster Hall was dedicated in June 1911.

The end of World War I brought an endowment from Mrs. Margaret Swope in memory of her son William, Class of 1900, who had been killed in the war.  This resulted in the dedication of beautiful Swope Chapel in 1920.  Then to cap off the decade, Westminster finally got a new gymnasium after ten years of planning and fundraising in the fall of 1929 during the presidency of Marion E. Melvin (1927-1933), which allowed gymnastics to be moved out of the attic of Westminster Hall which had been converted for that purpose shortly after it was built.

Then came the Great Depression, which produced declining enrollment and decreased faculty salaries as well as the demise of collegiate football at Westminster.   President Melvin resigned in March 1933, and the Board persuaded one of the faculty, Franc L. “Bullet’ McCluer, to succeed him. To assist McCluer, the Board brought in Herman Schuessler from the A. P. Green Company in Mexico to serve as Business Manager, a position he would hold until his death in 1966. Little did the Board realize the impact that “Bullet,” as he was affectionately known, would make on the college over the next fourteen years, not in terms of new buildings but through new and innovative program ideas.  Active on both the state and national levels, McCluer would bring considerable notoriety to the campus, particularly through the establishment of the John Findley Green Lecture Series in 1937, whose culmination, of course, was the visit of Winston Churchill nine years later.  In the meantime, McCluer worked energetically to increase enrollment with the hiring of Clarence Keel as the first full time admissions director, and during World War II by securing a Navy V-12 program, which kept the campus fully occupied.  McCluer left in 1947 to become President of Lindenwood but would return many times thereafter for special events.

William W. Hall came from the College of  Idaho to succeed  McCluer.  Two important events marked his administration:  the opening of Reeves Library, a gift from the family of long-time English Professor Jerry Reeves (the library had been in the basement of Swope Chapel since 1929) in 1951, and the securing of an Army ROTC program the following year through the efforts of Major General Harry Vaughan, President Truman’s military aide.

When Hall left in 1955, the Board turned to Robert L. D. Davidson as his successor, and a new era of great importance followed.  During the next 18 years, Davidson increased not only enrollment and the endowment but also expanded the campus to the west and to the south.  Declaring the need for freshmen to have a total experience beyond Fraternity Row, he built the Churchill Commons with the help of federal grant money between  1957 and 1959.   Then he followed this  in the 1960s with Champ Auditorium, which replaced Swope Chapel that had fallen down the hill due to structural problems, two additional upperclass residence halls, and his crowning achievement-the Winston Churchill Memorial and Library-dedicated in 1969.  Another important milestone occurred two years earlier with the opening of a new Science Center (ultimately named for Dr. Wallace Coulter) to house the rapidly expanding programs in biology and chemistry.  Simultaneously, another gift made possible a new president’s home south of the campus with Washington West House being turned into the president’s  and other administrative offices.

Three other presidents followed Davidson, who retired in 1973:  Dale L. Purcell (1973-1976), during whose administration Westminster Hall was completely remodeled and the Coulter gift received to complete the financing of the new Science Center; J. Harvey Saunders (1977-1992), who brought co-education to Westminster in dramatic fashion in 1979 and enhanced the endowment by $5.6 million, part of which paid for the replacement of ReUnion Hall with the Hunter Activities Center in 1989; and James F. Traer (1992-2000), who continued to build the endowment, which allowed the addition of the Mabee Wing to Reeves Library in 1996, the addition of many new academic and support programs, and the return of intercollegiate football in the fall of 1996.  Through these and other important changes, each of these presidents left their mark on the enhancement of the Westminster experience.

As Westminster prepared to enter the 21st Century, it stood poised for many other new achievements which would further strengthen the college that had begun its existence 150 years earlier in a single frame building.