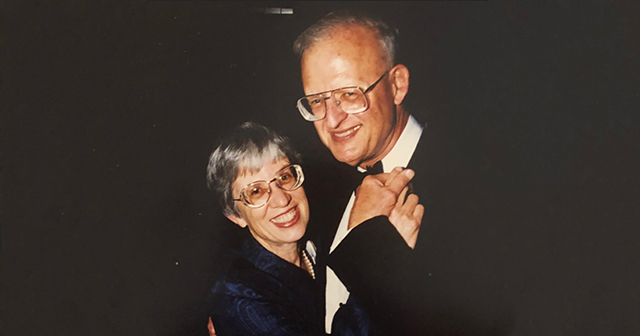 Born on Aug. 22, 1930, in Huntsville, AL, Dr. Hauer earned a Bachelor of Arts degree in 1952 from Birmingham-Southern College in Alabama. He then received both Bachelor of Divinity and Doctor of Philosophy degrees from Vanderbilt University in Nashville, TN. During a sabbatical from Westminster during the 1968-1969 Academic Year, Dr. Hauer completed a fellowship at Princeton University in Princeton, NJ. 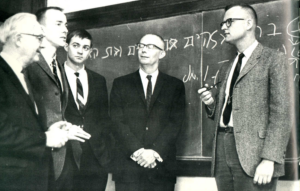 Dr. Hauer, far right, in a photo from the 1965 Blue Jay yearbook, taught at Westminster for 37 years.

Dr. Hauer married Lena Elizabeth (“Liz”) Buchanan on June 15, 1955. Liz, who preceded Dr. Hauer in death, served as a librarian at Reeves Library for 23 years. After retiring from Westminster, the couple retired to Huntsville, where they lived for more than two decades.

A prolific author who wrote about a variety of topics ― including music, philosophy, theology, the theory of liberal education and modern history ― Dr. Hauer focused on biblical history, Jewish studies and archeology in his scholarly research. He coauthored An Introduction to the Bible: A Journey into Three Worlds and A Comprehensive History of the London Church and Parish of St. Mary the Virgin, Aldermanbury with Professor Emeritus of Religious Studies Dr. William Young.

“He was a supportive mentor, friend and gifted teacher who inspired generations of Westminster students to broaden their perspectives on the world and think critically about fundamental questions,” Dr. Young reflects about his colleague of 20 years. 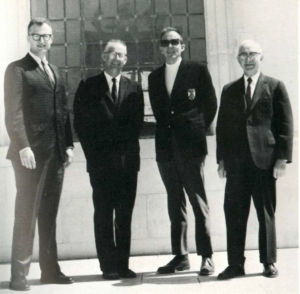 Dr. Hauer, pictured above, left in the 1968 Blue Jay yearbook outside of St. Mary the Virgin, Aldermanbury, was a fellow of America’s National Churchill Museum.

A champion of liberal arts education and interdisciplinary humanities classes, Dr. Hauer is remembered for innovative seminar courses such as Space Age Mythology and Contemporary Jewish Thought. Many remark they will miss his wry wit and intellect.

Alumnus D.C. Weiser, ’78, of Kansas City, MO, says Dr. Hauer’s friendship and intelligence were the hallmarks of their relationship. Hauer officiated at Weiser’s wedding to his wife, Helen, and continued to act as an influence throughout the course of his life.

“Under Chris’ tutelage, I stretched my intellectual wings,” Weiser says, adding that Dr. Hauer and Liz were known for their non-prejudicial attitudes towards others. “Chris was an ecumenical Protestant intellectual — a deeply religious man and prodigious scholar who loved music and the arts, especially opera.” 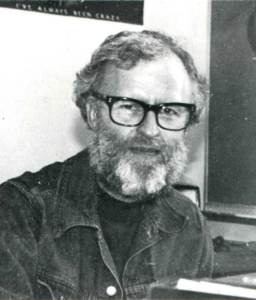 An active Presbyterian minister, Dr. Hauer served in many churches in the Fulton area before his retirement. He was a fellow of America’s National Churchill Museum, the Society of Antiquaries and the Royal Society of Arts. In addition, Dr. Hauer was known as an avid tennis player who also enjoyed gardening, traveling and Alabama football games.

Dr. Hauer will be lovingly remembered by his daughter, Anna Hauer Zelinsky; son-in-law, Yuri Zelinsky; granddaughter, Olena; and grandson, Peter, of Takoma Park, MD; as well as a number of nieces and grand-nieces. In addition to Liz, he is preceded in death by his son, John Christopher Hauer, and his brother, Billy J.T. Hauer.

Memorial contributions may be sent to The Chris and Liz Hauer Mander Organ Fund, found here, or to WLRH Public Radio, found here (please include a note in the comment field that your donation is in memory of Dr. Hauer).