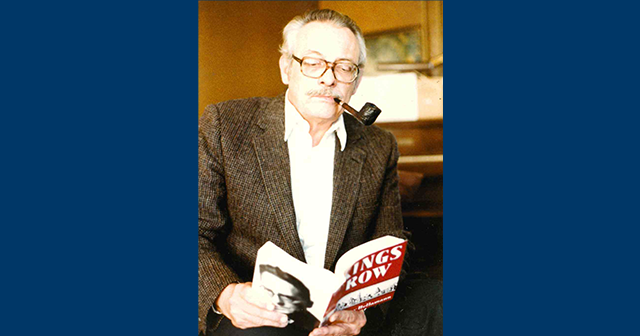 With great sadness, Westminster College announces the passing of Jay Miles Karr, Professor Emeritus of English, on Sunday, April 14, at the age of 92. A pillar of the Department of English, Karr taught a variety of composition and creative writing courses from 1965 until his retirement in 1996. A celebration of life will take place at 2 p.m. on June 1 at First Presbyterian Church at 718 Court Street in Fulton, MO.

Karr is revered by the Westminster community for his singular role in introducing creative writing into the College curriculum.

Born in Des Moines, Iowa, on August 17, 1926, Karr was drafted into the U.S. Army in 1944 and became a paratrooper in the 11th Airborne Division. His military experience helped form the details of a coming-of-age novel he published in 2005, Leaving the Home Front. 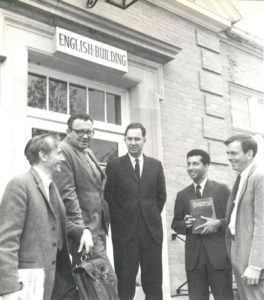 Professor Jay Karr, second from left, in a photo from the Blue Jay,1968.

Karr worked as a writer and editor for Better Homes and Gardens from 1950 to 1953. He taught English at the University of Idaho in Lewiston from 1958 to 1960 and both English and Journalism at Humboldt State College in Arcata, CA, from 1960 to 1963 before arriving at Westminster in 1965.

Karr is known locally and at the College for republishing the out-of-print bestseller King’s Row in 1981. Written by former Fulton resident Henry Bellamann in 1940 and made into a movie starring Ronald Reagan in 1942, Karr’s reprint involved extensive research that compared the characters and layout of the fictional town of King’s Row to Fulton.

In addition, Karr is remembered fondly by the Westminster Department of English for his role in bringing American short-story writer and poet Raymond Carver to campus in 1986. Well-respected poet Tess Gallagher, Carver’s wife, later presented at the College at Karr’s request.

Remembered as a novelist, jazz musician, painter, and playwright, Karr wrote a number of plays that were produced in Missouri and South Carolina during the 1990s.

Karr’s influence in the Department of English was monumental. “As the English Department Chair who was willing to take a chance on me and push to get me hired, Jay Karr was my first mentor at Westminster,” Dr. Carolyn Perry remembers. “He encouraged me to explore innovative approaches to teaching, gave me the freedom to design courses as I saw fit, and taught me how to foster a love of learning in my students.”

Dr. David Collins, Professor Emeritus of English, echoes Perry’s sentiments about Karr’s influence at Westminster, describing the creative writing curriculum for which Karr was responsible. “I had never before known of a place that required creative writing,” Collins says of the early years after Karr hired him. “Now I can’t image a college not requiring that of its majors.” 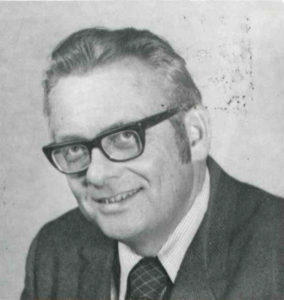 Doug Hunt ’71 ΚΑ describes his first English class at Westminster under Karr as a mind-blowing experience. “My mother taught me how to read, but Jay Karr taught me how to read fiction,” Hunt explains, describing a class analysis of Heart of Darkness. “He showed me the way both the subconscious mind and irrational mind interact with the rational mind and how that plays out in history.” Hunt’s experience ultimately led to a 35-year career teaching college English courses. He is now a Professor Emeritus of English at the University of Missouri-Columbia.

Finally, the Westminster community remembers Karr for a well-known personal quirk: his pipe. “Jay’s office was next to mine,” reflects Professor Emeritus Wayne Zade. “Even now, I still smell his pipe smoke whenever I open certain old books!”

In lieu of flowers, contributions in Karr’s name may be made to Westminster College, Our House, or the Fulton Public Library at Maupin Funeral Home, 301 Douglas Boulevard, Fulton, MO 65251. To leave condolences for Karr’s family, which includes his wife of 66 years, Phyllis, and three children, please go to the bottom of Karr’s obituary here.