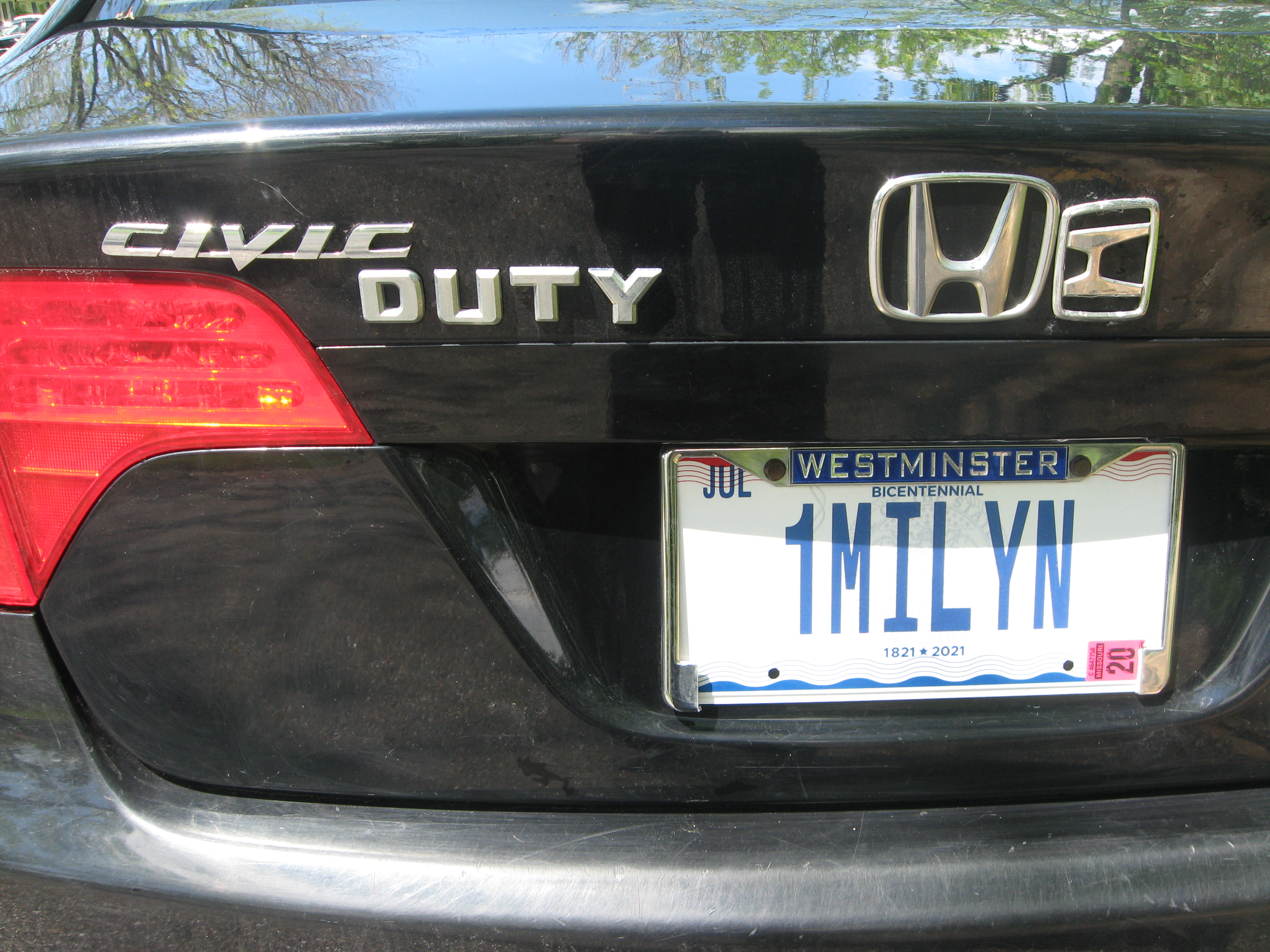 Darrell “Doc” Gould ’75 ΦΔΘ is a self-described glorified delivery boy who consistently makes a six-figure income as a bonded courier for BeavEx. But really, that description doesn’t begin to sum up the Kansas City, MO, native, who could more aptly be described as an existentialist, a car enthusiast, and a late-night radio talk show aficionado. Gould’s name caught Westminster College’s attention after an interview with him appeared in The Daily Drive, a blog of Consumer Guide Automotive. 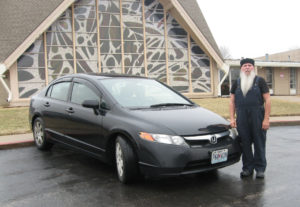 The blogger who wrote the story just happened to be an on-air guest with The Nick Diglio Show out of Chicago, IL, when Gould called during the wee hours of the night.

En route on a delivery from Kansas City, MO, to St. Louis, MO, Gould is among the “third-shifters, film lovers, insomniacs, and long-haul drivers” who frequent the late-night talk show, explains blogger Tom Appel of The Daily Drive. That night, the topic of choice wasn’t movies, politics, or pop culture, as sometimes is the case. Appel knows automotives, so callers focused on that subject for the night.

“Do you think Honda would want to know that I have put a million miles on my Civic?” Gould inquired.

And so an oddball conversation ensued in which Appel picked up on Gould’s wacky, unconventional personality. Be sure to check out Appel’s interview with Gould here. 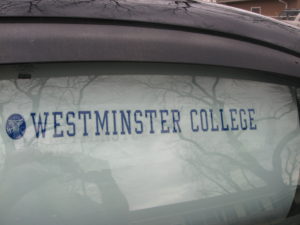 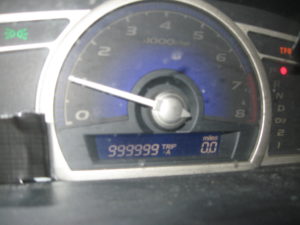 Westminster caught up with Gould to find out more about a life lived mostly on the road out of his immaculate 2008 Honda Civic, the plethora of jobs at which he toiled away before finally settling down in his 40s, and his love of Westminster College that brings the frequent traveler to Alumni Weekend each year.

Can you tell a little bit about your career path? To use the word “path” would indicate I had a destination or some direction. I haven’t. After Westminster, I landed in the pizza business, managing five restaurants. I managed a video store, and took my first driving/delivery jobs. I never married until my mid-40s, which explains the opportunity to be more reckless in my work history. At age 30, I spent two years as a professional mystery shopper and bought KFC chicken 300 times each month in a 40-state territory of these United States, performing anonymous written evaluations in areas of quality, service, and cleanliness. After that, I spent a few years in education, teaching children who were incarcerated as status offenders and juvenile delinquents, involving those students in community service through Habitat for Humanity. I always enjoyed driving, and returned to courier work, as I enjoyed working for myself, the travel, and me-time in the car. The last 10 years, I have done that work, delivering bank documents; auto parts; infusion medications; other miscellaneous on-call, long-distance deliveries; and the occasional human organ. I can’t wait to see what I might do when I grow up.

How did you get the nickname “Doc”? While many guys at Phi Delta Theta got one nickname that they kept for four years at Westminster, I had several before landing on the permanent “Doc.” My best friend in Phi Delta Theta, Tim Lamkin, also Westminster ’75, started calling me Dr. Lovelace, after a character who was in the TV show, Wild Wild West, and it morphed into “Doc.” Thank God that name stuck, and I tell people that if I hear my birth name of Darrell, it’s usually preceded by, “Will the defendant please rise?”

What organizations outside of work are you involved in? Back when I had more time, I was active in our homeowners’ association, a member of the Heartland Hosta and Shade Plant Society, had my students work with Habitat for Humanity, and volunteered to help my friend who was Executive Director of the Kansas City Black Chamber of Commerce. The Black Chamber awarded me their Chamber Award in 2004, as most-active volunteer. I also received the Kansas City Spirit Award in 2007 from the Gillis Foundation.

What made you choose Westminster College? My high school friend was going to William Woods, and I decided upon Westminster after my dad took us both to Fulton for official visits. I originally was going to be a math major, and on that visit got to meet Dr. Barrow, Chairman of the Math Department, and that impressed me as well as the faculty-to-student ratio of 1:12 at the time. Also, the attention shown to me by members of the Phi Delta Theta fraternity cemented my decision.

What was your major at Westminster? After seeing my life pass in front of my eyes when I was struggling in Calculus 3, I switched to majoring in French, Economics, and Business Administration.

Favorite Westminster faculty member? Dr. Adele Gorjanc, language instructor in both French and Italian, who loved me and greatly and positively contributed to my grade point average. She taught at William Woods, where I took most of my French and all Italian classes.

Family? Dawn, retired. She has a daughter and two grandchildren.

Last book you read, or a book you would recommend to others? I routinely go to my reference book, The Encyclopedia of Country Music, and have been having difficulty finding the time to finish A Good-Natured Riot: The Birth of the Grand Ole Opry by Charles K. Wolfe.

Do you have a favorite quote? As a courier who sees so many people, I have a zillion one-liners. Here are two of my favorites: My brother Pat advises, “Don’t sweat the petty stuff, and don’t pet the sweaty stuff.” And for those toiling away in obscurity at work, I remind them, “Doing a good job around here is like wetting your pants in a dark suit; it gives you a warm feeling, but nobody notices.” And I would be remiss to not include the Phi Delta Theta motto: “We enjoy life by the help and society of others.”

What do you do in your free time? Going to movies is a high priority. I also enjoy grilling and cooking. I do enjoy those rare times my few friends find time to socialize and catch up. I enjoy landscaping, and our yard is recognized as an Official Backyard Habitat by the National Wildlife Federation, and our home has been part of the annual Water Garden Tour of the Kansas City Water Garden Society, hosting hundreds of visitors over a weekend. I love listening to and learning about old-timey country music, old-time gospel, Western Swing, bluegrass, and classic country. There was a time when I enjoyed collecting Superman collectibles, amassing a collection of over $25,000 in collectibles from the 1930s to the present. I especially have enjoyed that my work and travels have resulted in two-and-a-half million miles driven around this great country, having visited and enjoyed so many places like Niagara Falls, the Grand Canyon, Mount Rushmore, White Sands National Monument, Carlsbad Caverns, and the Badlands. I’ve enjoyed all the miles between, including the plains, mountains, deserts, coasts, and oceans, as well as so many of our cities and citizens, and so, so many sunrises and sunsets.