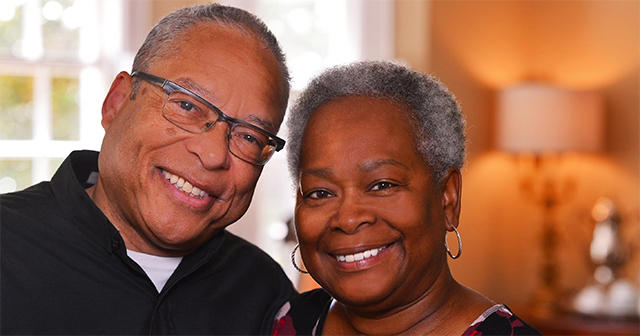 The Abernathys named a room in the Clevedale Historic Inn and Gardens after the Carolina
wren and Sir Christopher Wren. Photo by Tim Kimzey, Spartanburg Herald-Journal.

The Rev. Paul Abernathy ’74 ΒΘΠ  and his wife, Pontheolla Mack Abernathy, run the Clevedale Historic Inn and Gardens in Spartanburg, S.C., which houses a room dedicated to both the South Carolina state bird and Abernathy’s ties to Westminster College. The Wren Room showcases framed paintings of the Carolina wren, but the Church of St. Mary the Virgin, Aldermanbury — redesigned in the 1700s by Sir Christopher Wren — also gets credit for the name. “It’s a double entendre,” Abernathy says with a laugh.

Central to Westminster’s campus after being shipped stone by stone from England and rebuilt on Seventh Street in the late 1960s, the church is Abernathy’s favorite place on campus. “It’s a place of endearment to me,” he says, simply. 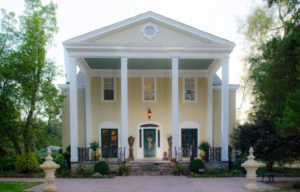 The Inn at the historic Clevedale Inn and Gardens dates back to 1913.
An original structure on the grounds dates back to the 1790s
and can be traced to the family of U.S. President Stephen Grover Cleveland.

The Episcopal minister from St. Louis, MO, found his life’s calling at the church and in classes at the College. He describes a time at Westminster during his sophomore year where he first experienced an existential crisis concerning questions about good and evil in the world. Dr. William Huntley, Westminster Chaplain at the time, befriended the Political Science major and helped him discover what turned out to be a vocation in ministry. “He allowed me, over the course of a semester, to meet with him and explore the realms of my disappointments and disillusionments,” Abernathy explains. “Not only was he the first adult in my life who, without judgment or a prescribed agenda for what I was to do and for who I was to be, called unto me to be me. He was the first who asked, ‘Have you ever considered ordained ministry?’”

Abernathy says the rest, as the proverbial saying goes, is history. He went on to receive a Master of Divinity degree from The General Theological Seminary in New York, NY, in 1977. Today Abernathy serves as a part-time priest at Epiphany Episcopal Church in Laurens, S.C., after a 35-year pastoral career in a variety of churches throughout Missouri, Chicago, and most recently, St. Mark’s Episcopal Church on Capitol Hill in Washington, D.C. When not at Epiphany Episcopal, the remainder of Abernathy’s time is spent at the Inn, where he reports to Pontheolla, primary owner of the bed and breakfast. “She is the capo di tutti capi,” Abernathy affectionately jokes, using a term from The Godfather that means “boss of all the bosses.” 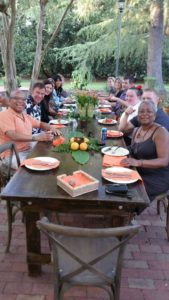 The Abernathys enjoy serving guests
together and often can be found
cooking dishes such as shrimp and
grits with goat cheese for breakfast.

Together the Abernathys have hosted weddings and receptions, corporate events, luncheons, and parties at the 1913 Colonial home since starting their business on the Italian cypress tree-lined property in August 2013. With an original structure dating back to the 1790s, Clevedale’s history has roots in the family tree that produced U.S. President Stephen Grover Cleveland as well as Moses Cleaveland, founder of Cleveland, OH. 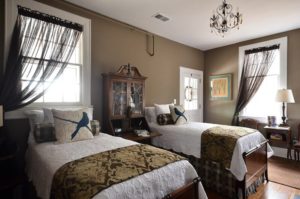 The blue and white linens in the Wren Room, pictured above,
are a nod to Westminster College’s colors.
The Carolina Wren also is prominently featured.

With such a lofty history, it would be easy for the facility to feel like a museum, but measured attention to detail helps the Inn feel like a home away from home. And one detail that would not escape a Westminster graduate’s notice is the Wren Room’s décor, with tapestries and linens in the College’s colors of blue and white. “Hospitality is rooted in our hearts and minds, souls, and spirits,” Abernathy explains. “Moreover, we have rejoiced, over time, to discern that hospitality is an act, an art of inherent mutuality … hence, we often say to our guests upon their departing, ‘Thank you for gracing our home and allowing us to serve you!’”

Whether Clevedale guests know it or not, that spirit of service and hospitality at least partially originated at Westminster College, where Abernathy discovered the power in his purpose more than 45 years ago.