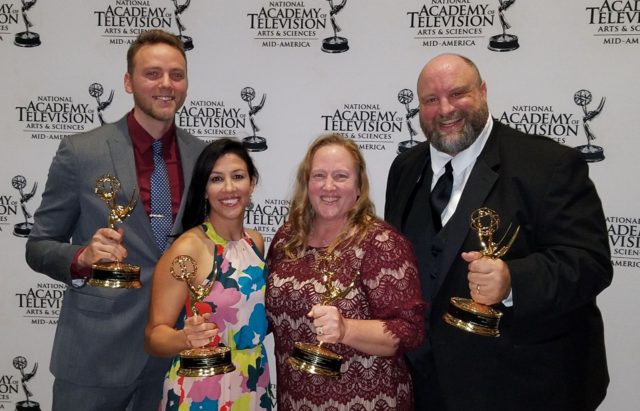 A KMOS-TV public television production that prominently features a story about the National Churchill Museum and Westminster College received a Regional Emmy Award in October. Episode 301 of Missouri Life extensively covers Sir Winston Churchill’s 1946 visit to Westminster and his iconic Sinews of Peace speech, later referred to as the “Iron Curtain” speech.

The Historic Gymnasium, Breakthrough sculpture by Churchill’s granddaughter Edwina Sandys, museum, and Church of St. Mary the Virgin Aldermanbury are comprehensively featured in the program, which can be viewed here.

The Mid-America Chapter of the National Academy of Arts and Sciences awarded the Missouri Life team the honor of Best Magazine Program for Episode 301, which also focuses on the town of Fulton, MO.

National Churchill Museum Sandra L. and Monroe E. Trout Director and Chief Curator Timothy Riley also is interviewed in the segment. He says he is pleased with how the production came together. “Like all of our visitors, Missouri Life was informed and inspired by their time on campus, “Riley says. “The excellent production team is very deserving of the Regional Emmy Award.”

The National Churchill Museum celebrates its 50th anniversary in 2019. A number of activities to commemorate the occasion are planned throughout the year.

For more information on the National Churchill Museum, please call 573.592.5369 or visit https://www.nationalchurchillmuseum.org/.