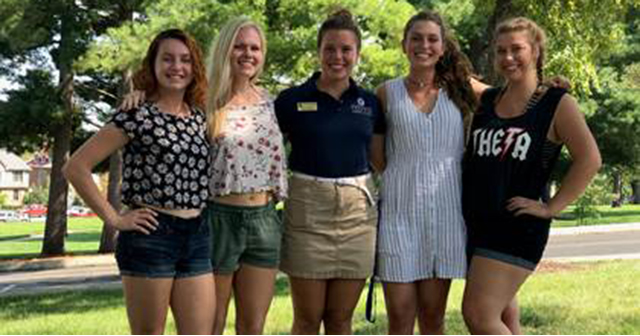 Biochemistry major Abigail Beach ’20 of Lexington, MO, has been accepted into the Bryant Scholars Pre-Admissions Program at the MU School of Medicine in Columbia, MO. Beach credits both Westminster’s faculty and alumni network for her acceptance into the program.

“A combination of Westminster’s biology department and alumni network has really guided me to this career path,” she says.

Dr. Amspoker and an alumni duo

Beach explains that her advisor, Dr. Michael Amspoker, told her about the Bryant Scholars program when she visited Westminster in high school, which influenced her decision to attend the College and pursue a career in medicine.

“I came to Westminster knowing I wanted to be a physician, but I wasn’t sure what type,” Beach explains.

With that information in mind, Amspoker connected Beach to Daniel Jackson, MD, ’04 in the Department of Maternal and Fetal Medicine at MU Health Care. Beach shadowed Jackson during the spring semester of her freshman year.

Beach quickly learned she did not want to be a NICU physician. But she still wanted to go into medicine. Next, she was introduced to Misty Todd, MD, ’13 during Todd’s Family Medicine residency at MU.

“Before I shadowed Dr. Todd, I was unsure if family medicine was the right path for me, but after both of those shadowing experiences, I was sure of it,” Beach says.

She adds that although she is not following in Jackson’s footsteps, he was instrumental in her acceptance into the Bryant Scholars program. “He wrote my physician’s letter of recommendation for the application,” Beach says.

A balanced life at Westminster

Most of Beach’s classes and tests take place in Coulter Science Center, and as a serious pre-med student, she says Coulter is her favorite place on campus. “Before coming to Westminster, I was never really challenged academically,” Beach explains. “Coulter is where I have learned more information than ever before.”

Beach adds that although she studies a lot, she manages to have fun. Her favorite Westminster memory is a hot day in the Quad as a freshman, where she and her suite mates placed a kiddie pool in the yard and filled it with water. “Now that I’m an RA, I think what we did may have been against the rules, but it’s a great memory,” she says.

In addition to achieving a noteworthy academic reputation while maintaining close friendships, Beach manages to pursue her interest in music. “People are often surprised to know I have a music minor,” she says of her time spent singing with the Churchill Singers. “But that’s one of the beauties of Westminster — you get to pick and choose what best suits you.”

Beach adds that her music minor is made possible because of Westminster’s liberal arts focus. “The liberal arts education is so important to me,” she explains. “While I have a passion for science and medicine, I love having the opportunities that we do through our education to appreciate other fields.”

And while Beach enjoys learning about a variety of subjects, she remains focused on science and credits the biology department for her acceptance into the Bryant Scholars program. “They give great guidance and really have given me the tools to make me a strong applicant,” she says.

Beach will participate in a Bryant Scholars retreat during Winter Break.

For more information on the Department of Biology or in Westminster’s Pre-Medicine Program, please visit our web site here.