Physics Students Have a Blast Preparing for Careers in Engineering

Click here to see one of the many Theoretical Physics I rocket launches that recently took place at a farm in Callaway County. Video by Sarah Cradick '20. → 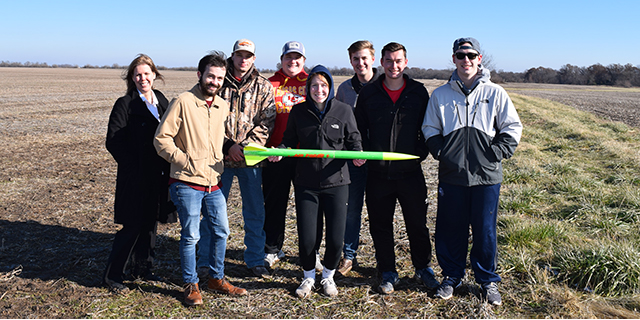 Students in Dr. Laura Stumpe’s Theoretical Physics I class are perfecting the use of a Python-language computer program they designed themselves to predict the altitude of rockets they built in class. From left: Dr. Laura Stumpe, Cole Sailor, Nick Monson, Colton Headrick, Sarah Cradick, Connor Felter, Jon Wheeler, and Will Braley.

Theoretical Physics I students recently had a blast firing off rockets they built in class. Associate Professor Dr. Laura Stumpe says the project — which involved a computer program the students designed to predict the rockets’ altitude — is graduate-level work. 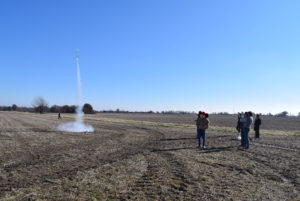 “I did a computational project like this in graduate school, and it’s not easy,” she explains.

The eight students gathered first on a rainy day at the end of November and then later on a cold, clear day in December at a farm in northern Callaway County. The farm provided enough space to allow for maximum visibility and safety for rocket firing. The off-campus excursions also involved a lot of yelling, running, laughter, and a little bit of mud. 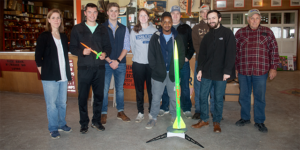 The students used an altimeter and a Python-language computer program they wrote themselves to predict not only altitude but to determine landing location and flight length of the various-sized rockets.

Some rockets successfully shot up to about 500 feet, while others didn’t launch at all — which is all part of the process, Stumpe explains. When that happened, she told the group to wait before running forward and grabbing the dormant rocket.

“Be careful, and make sure you stay back a little bit before approaching it,” Stumpe instructed the students, who are all physics majors with the exception of one, who is minoring in the subject.

Most of Stumpe’s physics students plan to attend engineering school through one of Westminster’s partnerships with Southern Illinois University-Carbondale, Washington University in St. Louis, MO, or Missouri University of Science and Technology, or Missouri S&T, in Rolla. They subsequently will graduate with degrees in both physics and engineering after a total of five years. The program is coordinated by Math Department Chair Dr. Peng Yu. Stumpe is Chair of the Physics Department.

“They get a solid foundation in math and physics courses before diving into engineering courses at an engineering school,” Stumpe says.

Physics, Pre-engineering, and Math Major Sarah Cradick ’20 from Maryland Heights, MO, explains that it is important to her be well rounded and pursue a complete education through a liberal arts degree. 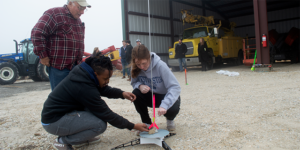 Tumain Nicholas and Sarah Cradick prepare their rocket for flight with the help of retired NASA Engineer Chuck Lahmeyer. Cradick chose to major in physics, pre-engineering, and math at Westminster instead of studying engineering at a larger university. The choice supported her interests in the liberal arts while also allowing her to play soccer.

“I wanted more than just an engineering degree,” she says. “I also wanted to play soccer, but I didn’t want soccer to be my whole life.”

And it seems Cradick’s plans have paid off. She started in all 19 Westminster Blue Jays soccer games this season and advanced with the team to NCAA finals in November. Cradick also is minoring in chemistry.

Similarly, Jon Wheeler ’20 ΦΔΘ from Springfield, IL, chose Westminster’s Dual Degree Engineering Program because he wanted to have time to play baseball. Wheeler made his decision to attend Westminster after visiting Missouri S&T. “I liked the small-school atmosphere, and it allowed me to do other things,” he explains. 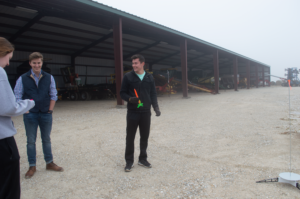 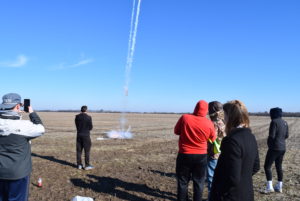 Jon Wheeler, center, chose Westminster for its small size. He is enrolled in the College’s Dual Degree Engineering Program.

Stumpe adds that Westminster’s pre-engineering program offers two engineering courses that similar schools don’t all provide: Introduction to Engineering and Statics. “Students can explore engineering on our campus with these two courses while building solid communications skills that are needed to be successful in the field,” she says.

But on the actual field on Dec. 5, with finals just around the corner, the students’ minds seemed far from career goals and more on hard-earned fun.

With cell phones held at arm’s length or shoved into the mud in front of each rocket to video record every launch, they shouted, “Five! Four! Three! Two! One!”

“Hands-on work and getting out of the classroom can be really beneficial,” Stumpe says. “And they had such a good time.”