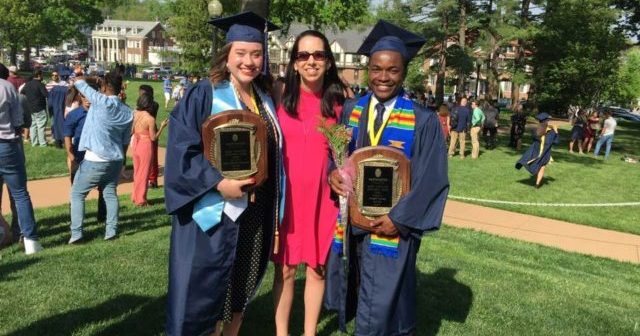 Before the Class of 2018 passed through the Columns and back into the world, Alumni Council President Kristen Jackson presented the Alumni Association Outstanding Senior Award, a change of venue from previous years.

Established in 1977, this is Westminster’s most prestigious award for graduating seniors.

The award honors a well-respected graduating senior for service to Westminster College, the city of Fulton and the surrounding community and their living group as well as for living a life of success, significance, and service while at Westminster.

This is a great honor for the individuals and is always a difficult decision to make.

A letter nominating Easterly states, “she has the intelligence, character, ambition, work ethic, and social and communication skills to make law review at a distinguished law school and to become an outstanding attorney working perhaps on social justice or human rights issues.”

Easterly, has been involved in a wide range of activities at Westminster. 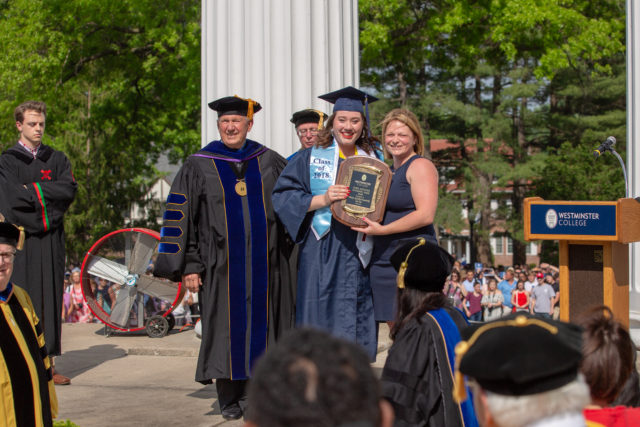 She was SGA Vice President, Grand Marshal of the Skulls of Seven, Vice President of Alpha Chi, an intern for the Remley Women’s Center, Homecoming Queen in 2017, a member of the women’s lacrosse team, a Westminster seminar mentor, student tutor, and active in her sorority, Kappa Kappa Gamma.

In his nomination letter for her, History Professor John Langton says “she has the intelligence, character, ambition, work ethic, and social and communication skills to make law review at a distinguished law school and to become an outstanding attorney working perhaps on social justice or human rights issues.”

Professor Langton refers to her as a “truly remarkable young woman—extremely bright and energetic, popular and personable with her peers and professors, and deeply committed to human rights, social justice, and making a difference in the world.”

The second Outstanding Senior is a young man whose nominator, John Elrod,’68 ΒΘΠ of Fayetteville, Arkansas has said will be the President of Ghana one day if the country is that fortunate.

Joseph Opoku from Accra, Ghana, is the son of a single mother and spent the first nine years of his life in a small village with no formal education. 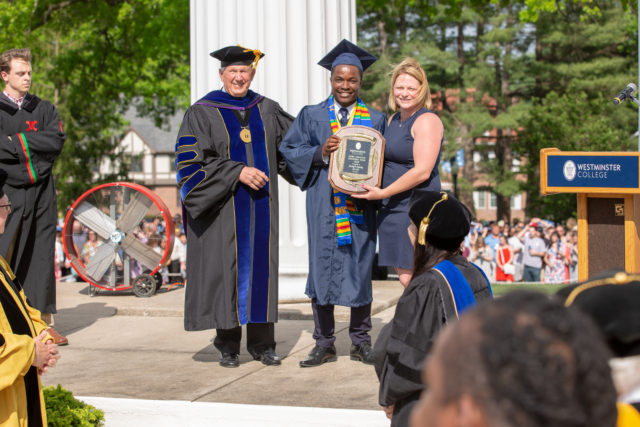 He certainly has made up for lost time.

His accomplishments extend far beyond the campus of Westminster, and in his young life he has already had a significant impact on the world.

For seven years he was a children’s rights advocate for Children and Youth in Broadcasting.

In his homeland of Ghana, he continues to organize youth impact workshops, convening over 200 people and designing 50 group action projects for community development.

He is a Fellow of the Resolution Project of New York, where he won a $5,000 grant to support young women in urban poor communities in Ghana.

Recently, he was on a panel with several ministers of African countries in Cairo, Egypt.

His nomination letters describe him as “an extraordinary young man destined for great achievements in life,” who “will continue to leave his mark on the world.”

Grand Marshal of the Skulls of Seven Jamey Lemon ’19 ΔΤΔ from Columbia, Missouri escorted the two honorees to the podium to receive their awards.