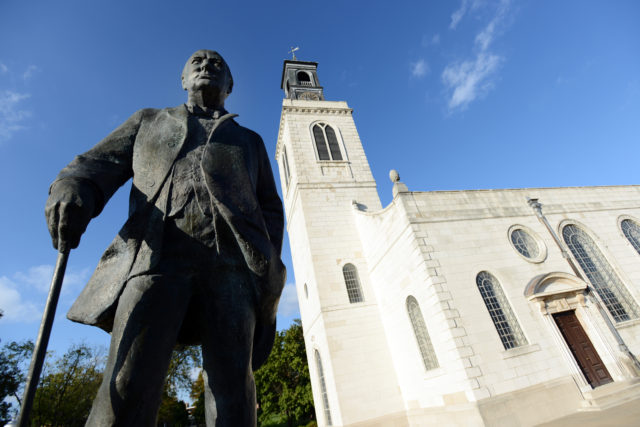 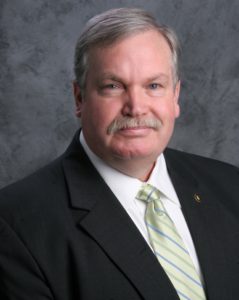 Brock Ayers
First Vice President–Investments, Wells Fargo Advisors, St. Louis, MO
A Westminster alumnus, Class of 1982, and a long-time supporter of Westminster and America’s National Churchill Museum, Ayers has been a member of the College’s Board of Trustees since 1999. He earned his degree in Economics and Business Administration, and upon graduation joined the U.S. Army as an intelligence officer with the 25th Infantry Division, U.S. Transportation Command, and the Defense Intelligence Agency. He later earned his master’s in Strategic Intelligence from the National Defense University. Ayers served on the National Security Council and White House Situation Room crisis management and intelligence staff for Presidents Ronald Reagan and George H. W. Bush. Three of his daughters are Westminster graduates, and a fourth daughter plans to graduate in 2021. 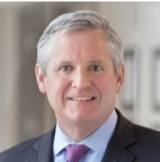 Partner, Dowd Bennett, St. Louis, MO
Routinely ranked as one of the top lawyers in the United States by The Best Lawyers in America, Bennett is a Westminster alumnus, Class of 1992. He is a long-time supporter of Westminster and also has been devoted to America’s National Churchill Museum. Bennett is a member of the Board of Trustees for American Inns of Court and was recently inducted into the American College of Trial Lawyers. He graduated from Vanderbilt Law School in Nashville, TN, and clerked for the Hon. Anthony M. Kennedy on the U.S. Supreme Court. A member of the Westminster Athletics Hall of Fame, Bennett’s son, Andy, is a current student at Westminster, Class of 2020. 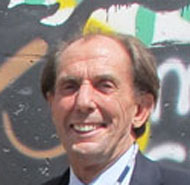 Prince Erik de Bourbon
Noted Art Consultant, Curator, and Historian, Palm Beach, FL
Prince Erik de Bourbon has had a lifelong interest in history and the visual arts. Since graduation in France, he has been active in the international art world and has curated art exhibitions in Europe and the United States. From 2013 to 2014, he worked closely with the Los Angeles County Museum of Art and the Pompidou Centre, France, on an extensive retrospective of an important 20th century artist. De Bourbon is currently curator of a number of private collections. His father was a WWII hero and fought for the USA (OSS), the UK (Jedburgh Commandos), and later for France in Indochina. His father’s story helped develop the great respect he has for Winston Churchill. It was a great honor for him to be invited to be guest curator for the exhibition held on behalf of America’s National Churchill Museum in Palm Beach, FL, in 2018: A Man for All Seasons – The Art of Winston Churchill. This exhibition was the most successful to take place at The Society of The Four Arts, Palm Beach. 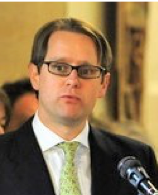 Great-Grandson of Clementine and Winston S. Churchill
Seend, Wiltshire, England
Jack Churchill is the great-grandson of Winston and Clementine Churchill and has been a long-time supporter of the many organizations commemorating the Churchill legacy. His parents are Winston Churchill and Minnie d’Erlanger, and his paternal grandparents are Randolph Churchill and Pamela Digby. Churchill’s father, Winston, accompanied Randolph Churchill to the White House in 1963 to accept on behalf of his father the honorary American citizenship bestowed on the elder Churchill by President John F. Kennedy, then Honorary Chairman of Westminster College’s Churchill Memorial project. The 88-year-old Churchill watched the ceremony from his London home via satellite relay. Churchill’s brother and sister, Randolph and Jennie Churchill, are Churchill Fellows. He is the founder and CEO of Scanning Pens, the world’s largest supplier of pen scanners. These portable pens are used to support young people and adults with dyslexia or who are learning a language, allowing individuals to read printed text independently. Churchill sits on the board of the British Assistive Technology Association (BATA), St Mary’s Calne School, and the International Churchill Society. He is the father of three children and lives in Seend, Wiltshire, England, with his wife, Charlotte. They have graciously loaned items from their personal collection to exhibitions organized by America’s National Churchill Museum. 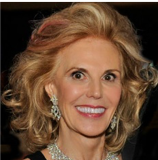 Clementina “Tina” Santi Flaherty
Author, Business Executive, New York, NY
Tina Santi Flaherty is an author, speaker, philanthropist and business executive. She is probably the only TV performer to become the first female vice president of three of leading U.S. corporations: Colgate-Palmolive, Grey Advertising, and GTE (now Verizon). Her most recent book, What Jackie Taught Us: Lessons from the Remarkable Life of Jacqueline Kennedy Onassis, was released by Penguin Random House in an expanded commemorative edition in 2014. Recently profiled as “The Jackie Kennedy Expert” on ABC TV’s 20/20 documentary, “The Last Days of JFK Jr.,” she also is featured in a well-received BBC documentary streaming on Netflix, Jackie: A Tale of Two Sisters. Flaherty has lectured about the life and times of Jackie Kennedy, Ernest Hemingway, and Winston Churchill to audiences throughout the United States and United Kingdom. A board member of the Statue of Liberty-Ellis Island Foundation, she underwrote the Embracing Liberty exhibition featuring Winston Churchill and Franklin D. Roosevelt at the new Statue of Liberty Museum opening May 16, 2019. A patron of the Churchill Archives Centre at Churchill College, Cambridge, UK, Flaherty co-underwrote the Churchill: Power of Words exhibition at the Morgan Library & Museum in New York. Additionally, she created and funded a multi-year Churchill lecture series at Hunter College in New York. In addition, she served as Conference Patron for “Churchill: Celebrating a Life,” the 32nd International Churchill Conference at Oxfordshire, England. A leader in animal welfare, Flaherty established the Flaherty Rehabilitation Center at the Animal Medical Center, heralded as one of the top five rehabilitation centers for animals in the world. She also underwrote the Flaherty Learning Center at the Bronx Zoo. Devoting her philanthropy throughout the world, Flaherty endowed the Flaherty Cultural Center at the historic Oscar Wilde House in Dublin, Ireland, and supported the Medici Archive Project in Florence, Italy. 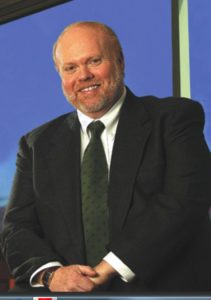 Don Foss
Retired CEO and Chairman of the Board, Credit Acceptance, Franklin, MI
Don Foss is a Michigan native who spent his childhood helping his father in the family’s used car business through grade school and started his own used car business right out of high school. In 1967, at age 22, he rented a dirt lot in downtown Detroit, catering to the working poor and those with less-than-perfect credit. Five years later, Foss launched Credit Acceptance, which handled financing and collections for what would eventually become 17 car lots in six states. Before long, Foss was selling 1,500 cars per month and was considered the world’s most successful used car dealer. Foss served as the company’s CEO from 1972 through 2001 and became board chair at the time of the company’s initial public stock offering in 1992. He was essential in the company’s market capitalization growth, which went from $90 million to more than $4.5 billion. Foss retired in January of 2017 and lives with his wife in Franklin, MI. They continue to serve Detroit through many philanthropic efforts. Foss is an avid Churchillian and has graciously shared items from his Churchill collection for exhibitions organized by America’s National Churchill Museum at prestigious venues throughout the United States. 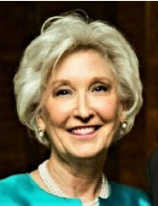 Deborah G. Lindsay
Writer and Historian, Marietta, GA
Co-founder and vice-president of The Aegis Group, a marketing consortium, Lindsay now pursues her passion for history, having just completed her first book, Behind Barbed Wire: A History of Concentration Camps from 1896-1945. She sits on the Advisory Committee of the Holocaust Museum at Kennesaw State University in Georgia and for the Civil War Center, also at Kennesaw State. She served as Trustee of the National World War II Museum and as board member for both the Atlanta Civil War and the Atlanta WWII Round Tables.

Ken Murer
Founder and CEO, APC Integrated Services Group, Inc., Chesterfield, MO
Ken Murer is a Westminster alum, Class of 1987, and a member of the Westminster College Board of Trustees. He is the Founder and CEO of Automotive Product Consultants Integrated Services Group, a conglomeration of companies that leads the automotive sector in partnered database marketing. He previously founded two similar companies, C.A.R.E. LLC, a pioneering internet/classified advertising, finance start-up, and Consumer Automotive Consultants (CAC). A long-time supporter of the College, Murer also serves on the restoration committee for the Sigma Chi house on campus and America’s National Churchill Museum. He is a published poet, certified scuba diver, Level 200 Licensed Alpine Ski Coach, past president and board member of the Hidden Valley Ski Team, recipient of the Boy Scouts’ Golden “Knot” award for years of service and philanthropy, and past president of the Moolah Shriners Ceremonial Cast. Murer’s father, Fred E. Murer, is a 1963 graduate of Westminster. His mother, Linda Murer (WWU ’61), and sister, Laura (WWU ’91), graduated from William Woods University. Murer’s son, Erik, attends Westminster, Class of 2022. 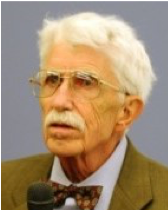 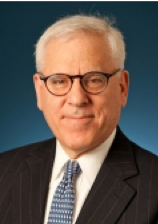 David M. Rubenstein
Co-Founder and Co-Executive Chair of The Carlyle Group, Washington, DC
David M. Rubenstein co-founded The Carlyle Group in 1987. Since then, it has grown into a firm managing $210 billion from 31 offices around the world. He also is the host of “The David Rubenstein Show: Peer-to-Peer Conversations” on Bloomberg TV and PBS. He serves on numerous boards of trustees, including as chair of the John F. Kennedy Center for the Performing Arts, the Smithsonian Institution, and the Council on Foreign Relations. He is president of The Economic Club. He also is a trustee of the National Gallery of Art, the University of Chicago, Memorial Sloan-Kettering Cancer Center, the Lincoln Center for the Performing Arts, the Brookings Institution, the World Economic Forum, and other internationally recognized organizations. Rubenstein has served as chair of the Board of Trustees of Duke University and co-chair of the Board of the Brookings Institute. Rubenstein is an original signer of The Giving Pledge and has been a leader in the area of Patriotic Philanthropy, having made transformative gifts for some of the nation’s most important monuments and memorials, such as the Washington Monument, Monticello, Mount Vernon, and the Smithsonian, and has provided long-term loans of rare copies of historic documents, such as the Magna Carta, the Declaration of Independence, the Emancipation Proclamation, and other rare documents and books. Earlier in his career, Rubenstein practiced law in New York City, later served as chief counsel to the U.S. Senate Judiciary Committee’s Subcommittee on Constitutional Amendments, and was deputy assistant to the president for the Center for Domestic Policy. He is a native of Baltimore, a 1970 Duke University graduate, and a 1973 graduate of the University of Chicago Law School, where he was an editor of The Law Review.

The Honorable Emma Soames
London, England
The granddaughter of Winston and Clementine Churchill and the daughter of Mary Soames, the youngest of the Churchill’s five children, Soames is an impressive reporter and editor who made her own mark in the field of journalism. She has served as editor for various publications, including Tatler, the Literary Review, Telegraph Magazine, and ES Magazine. In celebrating the museum anniversary in Fulton, Soames is following in the footsteps of her mother, who attended the re-hallowing of the Church of St. Mary the Virgin, Aldermanbury, in 1969 and served as a Churchill Fellow for many years. 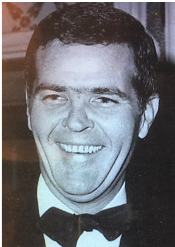 Benjamin David Stinson
Former Vice President of Development, Westminster College, 1958 to 1974
While serving as vice president of Westminster College, the Board of Trustees selected Stinson as the project manager for the reconstruction of the Church of St. Mary the Virgin, Aldermanbury. Part of this role involved fundraising for the project. In that capacity, he formed a lifelong friendship with actor Douglas Fairbanks Jr. Stinson’s work culminated in the dedication of the church in 1969. After his tenure with Westminster, Stinson worked as a fundraiser for the Missouri Colleges Fund, a regional organization that, at the time, supported 16 private colleges throughout Missouri. A longtime resident of Fulton, Stinson eventually moved to Manchester, MO, where he died at the age of 87.