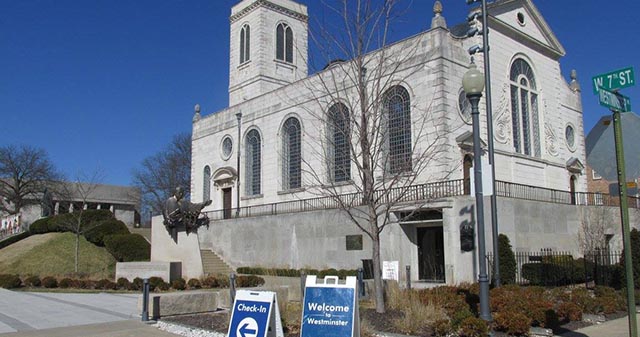 Churchillians attending the upcoming Churchill Fellows Weekend Saturday, April 1, hosted by the National Churchill Museum on the campus of Westminster College will hear from not just one prominent national figure, which has been the custom, but two.

That afternoon at 2:30 p.m. attendees will listen to a “Conversation with General David H. Petraeus, USA, Retired in the Church of St. Mary the Virgin, Aldermanbury.  General Petraeus is a partner in the investment firm Kohlberg Kravis Roberts & Co. L.P.  and Chairman of the KKR Global Institute. He was former CIA Director and former Commander of U.S. forces in Afghanistan and NATO International Security Assistance Force.

Sir Winston Churchill’s granddaughter, The Hon. Edwina Sandys MBE, who created the sculpture Breakthrough, which is comprised of actual sections of the Berlin Wall and installed on the Westminster campus, will also be in attendance.

Both lectures are free and open to the public if seating is available.  Purchasing a ticket for all the day’s events guarantees a preferred seat for both lectures.

Meacham won the 2009 Pulitzer Prize for his biography American Lion: Andrew Jackson in the White House and is known for having written the definitive biography of George Herbert Walker Bush, Destiny and Power: The American Odyssey of George Herbert Walker Bush, in 2015. In 2003 he published Franklin and Winston: An Intimate Biography of an Epic Friendship.

As Executive Director at Random House, he has published the letters of Arthur Schlesinger, Jr. and books by authors such as Al Gore, John Danforth and Lady Mary Soames.

Meacham served as Managing Editor of Newsweek magazine for eight years before becoming editor from 2006-2010.

He is a regular guest on the television broadcasts of “Morning Joe,” “Charlie Rose,” and “Meet The Press.”

During his 37-year career in the U.S. Army, General Petraeus, the second speaker, was widely recognized for his command of the organization that produced the U.S. Army’s counterinsurgency manual and overhauled all aspects of preparing U.S. Army leaders and units for deployment to combat; for his leadership of the Surge in Iraq, during which violence in Iraq was greatly reduced; and for his command of forces in Afghanistan as they reversed the momentum of the Taliban and enabled the commencement of the transition of tasks to Afghan forces.

Attendees may also sponsor Westminster College students to attend the luncheon and sit at their table for $50 a ticket.

An optional dinner and private showing of original oil paintings by Sir Winston Churchill will be held that evening at the Ritz-Carlton Hotel in St. Louis for $75 a ticket.

Those interested in tickets can register and order them online at https://www.nationalchurchillmuseum.org/churchillweekend.html.

For additional information, contact Meda Young at 573-592-5602 or by email at Meda.Young@westminster-mo.edu

To listen to a Westminster Waves podcast interview with Museum Director Timothy Riley, go to https://soundcloud.com/westminster-college/2017-churchill-fellows-weekend.