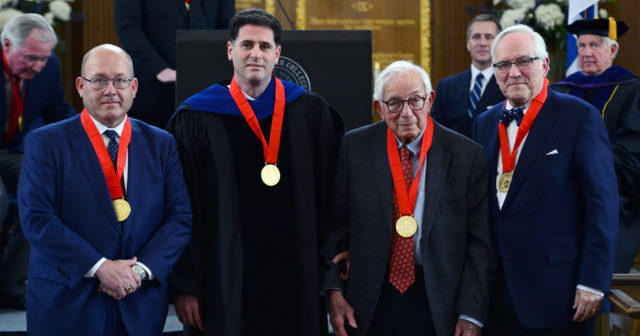 Five prominent business, legal, and educational leaders have been inducted into the Association of Churchill Fellows, an honorary society dedicated to the National Churchill Museum at Westminster College, where Sir Winston Churchill delivered his historic “Iron Curtain” speech in 1946.

After the medals were presented, Harris addressed the audience, saying he was “extremely honored” to be inducted into the Churchill Society because he modeled much of his life after Winston Churchill, whose “strength and tenacity” during World War II saved Great Britain from German occupation. 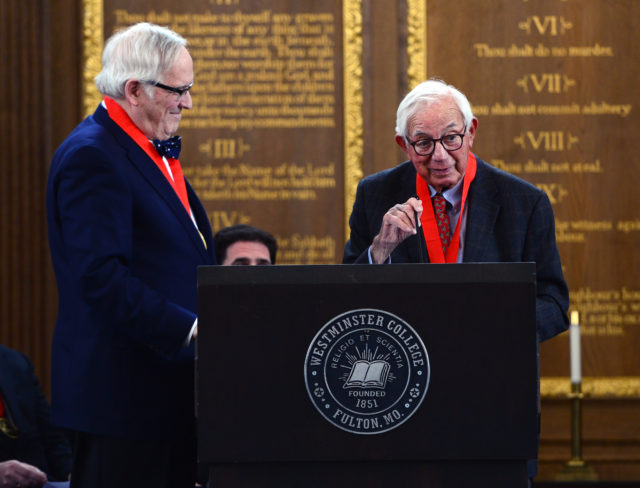 When Durant, who was standing next to Harris, proudly told the audience the quiet, modest Harris had commanded a bomber squadron in the 8th U.S. Air Force during WWII, flew 33 combat missions (a third of them involving air strikes over France), led a record eight bombing raids over Berlin, and was twice shot down, the typically reserved audience burst into applause and gave a standing ovation for Harris, who turns 98 years of age in April.

Following their remarks, Dermer, who is based in Washington D.C. and lives in Jerusalem, said he was honored to be delivering his speech in the Church of St. Mary the Virgin, Aldermanbury on Westminster’s campus.

“Destroyed by Nazis (during WWII) and rebuilt by Americans, this church is a powerful symbol of freedom and hope,” Dermer said of the church. “How fitting that it stands in the place where the great man who saved the Old World placed his faith once again in the New.”

Dermer also delivered the Enid and R. Crosby Kemper Lecture, which is part of the annual induction ceremony. In his speech, titled “Churchill and Israel,” Dermer thanked Winston Churchill for being a stalwart proponent for the formation of the State of Israel, even though he was often at odds with the British government and members of his own party over the issue.

“’I am full of sympathy for Zionism. I believe that the establishment of a Jewish Nation Home in Palestine will be a blessing for (Jews) scattered all over the world and a blessing to Great Britain,’” Dermer quoted Churchill as saying as early as 1921. “’I firmly believe it will be a blessing to all the inhabitants of this country without distinction of race and religion.’”

Churchill continued pushing for “an independent Israel” over the following 26 years, and in 1948, Israel declared its independence as a sovereign nation. (Ambassador Dermer’s entire speech, which is filled with historical details citing Churchill’s fight for Israel, can be read here and watched here.)

Since the organization started 49 years ago, more than 300 Churchill Fellows have been recognized for their dedication to the National Churchill Museum including Henry Ford II, President Dwight Eisenhower, Walter Cronkite, Margaret Thatcher, and the Right Honorable Earl Mountbatten of Burma.