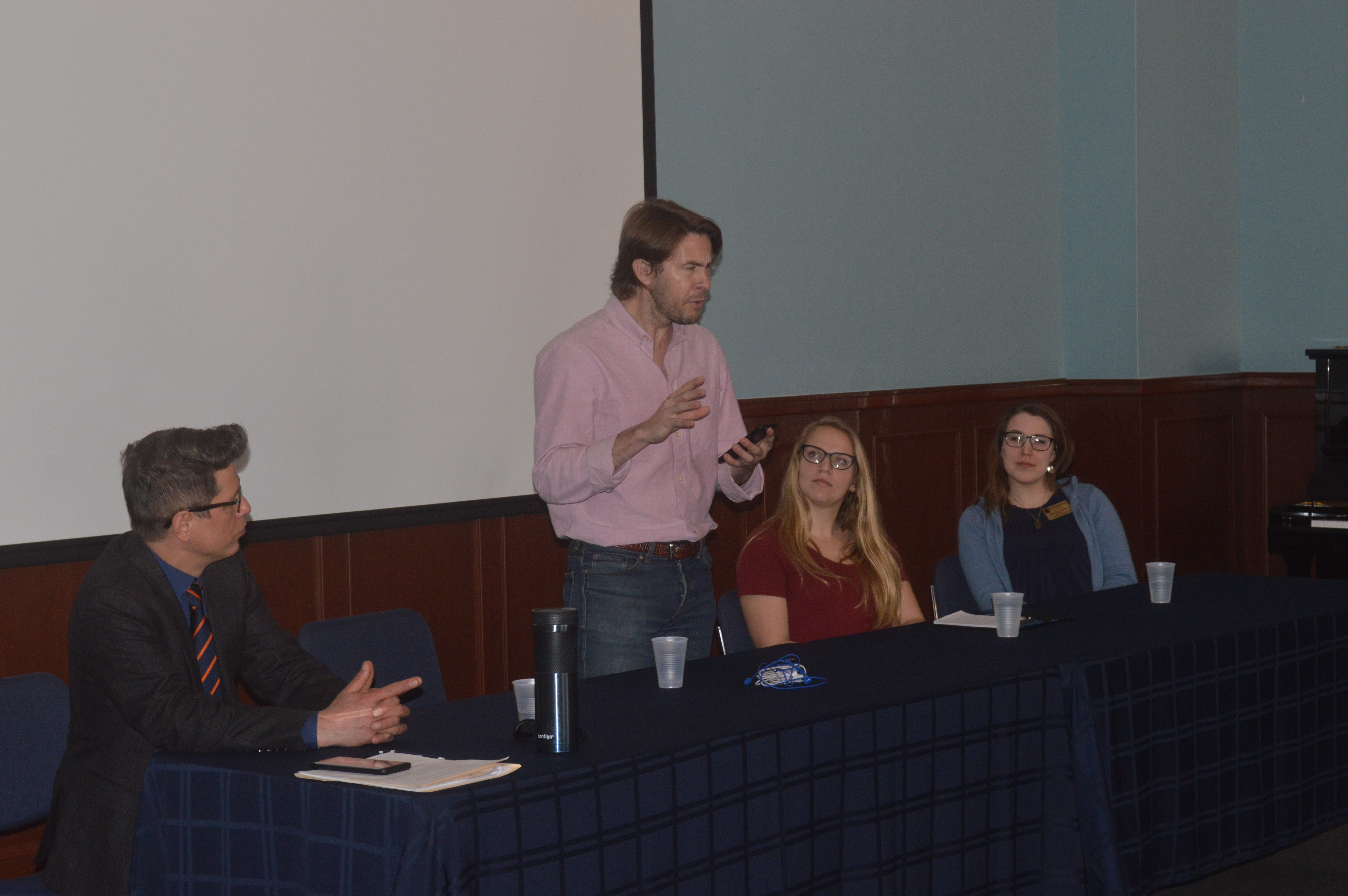 Westminster College is exploring relatively uncharted territory by hosting a series of events that will bring together people from differing ideological backgrounds for honest, respectful conversations. Sponsored by the Churchill Institute for Global Engagement, the panel discussions are designed to create a model for other campuses to follow.

Dr. Jeremy Straughn, Assistant Dean for Global Initiatives and Director of the Churchill Institute for Global Engagement, explains that the talks — dubbed initially as “Tough Conversations” — are specifically designed to reach across partisan lines.

“We hope that by hosting these events, we can develop a model for creating ‘sinews of peace’ on our campus and beyond: relationships that acknowledge difference and allow for an honest exchange of views,” Straughn says.

One of the first panel discussions took place in front of a full-capacity audience of more than 50 students, faculty, and staff at noon on April 1 in the Hermann Lounge at Hunter Activity Center. Titled “Free Speech vs. Political Correctness,” the panel included Westminster student Lydia Creech ’19, Chaplain and Director for the Center for Faith and Service Kiva Nice-Webb, and special guest Dr. Brandon Van Dyck of Lafayette College in Easton, Pennsylvania.

Van Dyck is a professor of Government and Law as well as founder and president of The Mill Series, which brings to Lafayette College speakers with mostly conservative viewpoints. Van Dyck says that points of view from the right of the political spectrum run counter to predominantly left-leaning viewpoints on most college campuses throughout the United States today.

“If you’re a progressive, it’s possible for you to never be exposed to opposing ideas,” Van Dyck explains. “And I think that’s bad for your intellectual development.”

Straughn explains that this particular panel discussion took place after various students said their viewpoints were not receiving the same attention as others. He adds that for balance, the other two panelists from Monday’s discussion were chosen carefully. Creech represented a conservative student viewpoint, while Nice-Webb’s role on the panel emphasized her impartiality on campus in providing a listening ear to all students, regardless of belief.

“In genuinely trying to understand one another we need to ask what would it take to engage well? Even in higher ed, emotions are there,” Nice-Webb says, explaining that civil conversation is possible but requires emotional intelligence just as much as rational argumentation.

Straughn says input so far about the panel is that the one-hour format did not allow for enough discussion. “That reaction is encouraging,” he says. “It means we did something right, and our audience wished there was more of it.”

Monday’s discussion follows a panel in March on carbon politics, where students packed the room despite single-digit temperatures outside. “The students who attended told us they appreciated being presented with diverse perspectives and being invited to weigh the evidence and draw their own conclusions,” Straughn says. “We’re trying to learn from that as we move toward a more structured series next year.”

For more information on the new panel discussions or the Churchill Institute for Global Engagement, please contact Dr. Jeremy Straughn at Jeremy.Straughn@westminster-mo.edu.