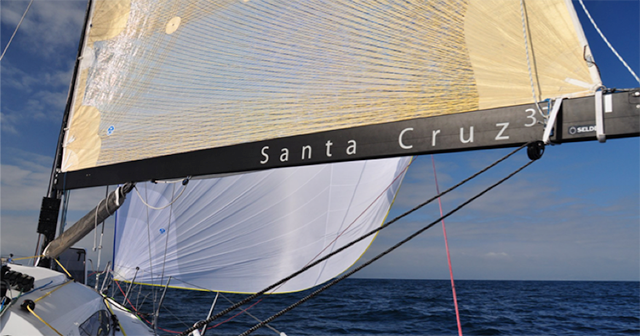 The Celerity, above, is a 37-foot sailboat owned by Harry Zanville.

Harry Zanville ’70 and his crew of amateur sailors won the First to Finish and four other major trophies in the world’s longest non-stop sailboat race in 2015. The Transpac Race — scheduled every other year since 1904 — runs from Los Angeles, CA, to Honolulu, HI, and attracts some of the sleekest, most expensive racing yachts in the world.

Zanville describes his win was a David-like victory that took place among a fleet of Goliaths. “We are one of the smallest boats in the offshore racing fleet,” he says of his 37-foot sailboat, Celerity. “Our goal is to have a great time and finish ahead of the $350 million, 100-foot racing yachts with professional crewmen and navigators.”

He explains that his Celerity crew managed to win by making strategic decisions that took place 700 nautical miles from Hawaii, resulting in a finish that took place more than 16 hours ahead of the next-fastest competitor — a 100-foot boat from Australia, named Wild Oats, that was sailed by 16 professionals. 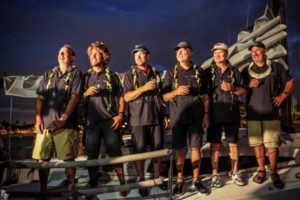 The amateur Celerity crew, above, following their 2015
Transpac Race victory.

The underdog Celerity crew immediately became the toast of Hawaii after winning the fastest elapsed time for a boat measuring less than 49 feet. The boat’s size garnered a special award just for the occasion: the Don Clothier “Little Barn Door Trophy.” Celerity also won the well-established Navigator’s Prize, which recognized the crew’s navigational victory. “Our strategic decision initiated a lovefest with the local sailing community, with lots of media coverage,” Zanville says. “Our friends and family were there, and tears of joy and relief were involved.”

This map illustrates the route Celerity sailed from Los Angeles to Honolulu.

The Celerity victory came as a result of more than 30 years that Zanville has spent sailing and follows a childhood interest in the hobby. Born in Toledo, OH, and raised landlocked in Dallas, TX, Zanville used to read his father’s Ships and the Seas magazine and dream of sailing. And although he still works as an attorney with a national practice, Zanville says his love of sailing is of utmost importance. His avid interest in sailing led to a six-year offshore sabbatical on a 47-foot cruising sailboat in the Caribbean and South America, where he and his wife, Janet, homeschooled their son, Rob, who is now 39. The couple also have a daughter, Leah, 43, and two grandchildren.

Zanville received a BA in Political Science and English from Westminster in 1970 and a Juris Doctor degree from the University of Toledo College of Law in 1974. As a Westminster student, Zanville’s competitive spirit is illustrated in his gleeful attitude that holds today over a Missouri Collegiate Debate Championship win and in the Independents earning the best grades in 1970. “The GDIs performed as the top living unit on campus that year,” he says in listing off his favorite Westminster memories. 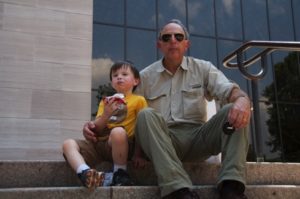 When not sailing, Harry Zanville, above, works as an
attorney with a national practice.

Another treasured memory of the College includes skipping class to cook hamburgers over a fire along what is now the Stinson Creek Trail. His professor, Dr. John Gates, asked him later why he missed Ethics class, and Zanville explained the learning process that he was undertaking in the woods. Gates and the rest of the class joined him the next day.

Today Zanville, who lives in La Mesa, CA, recalls that the non-traditional approach Gates took in conducting class outdoors is an example of how the College helped him succeed in life. “Westminster’s academic environment, both nurturing and challenging, provided intellectual discipline, while encouraging experimentation,” he says.  Zanville adds that he attributes much of his academic success to Professors Chris Hauer, Ernie Mitler, and Peter Kim.

Zanville’s next experiment will be what he describes as a “bucket list” boating race. He plans to join his sailing crew in October 2019 in the Mediterranean to compete in the Middle Sea Race that runs from the island of Malta, around Sicily and Tunisia’s Out Islands, and back to Malta. The crew will practice in the Greek islands in April 2019. And while some may shrink from the idea of so much high-seas travel, Zanville certainly does not. His sailing hobby matches with his favorite quote and life philosophy by Confucius: “No matter where you go, there you are.”