Listen as Ayers Discusses His Role with the National Security Council Under Presidents Ronald Reagan and George H. W. Bush, pictured above with Ayers. → 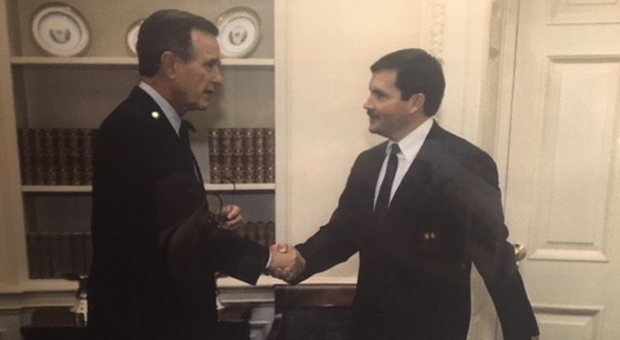 Following the death of President George H. W. Bush, Brock Ayers ’82 ΔΤΔ was interviewed Dec. 8 on The Randy Tobler Show on NewsTalk 97.1 in St. Louis, MO. The interview focused on his days at the White House from 1988 to 1990.

Ayers is a retired U.S. Army Intelligence Officer who served on the National Security Council staff in the Reagan and Bush administrations. Listen as he discusses his role in helping with continuity during the January 1989 presidential transition from President Reagan to President Bush. He also talks a little bit about the Situation Room and the transition from jelly beans to M&Ms as the administrations changed.

Westminster College, the National Churchill Museum, Bush’s two speaking engagements at the College, Fulton’s restaurants, and Ayers’ years of service to Westminster also were highlighted on the program.

Ayers is an active member of the Westminster Alumni Association and Board of Trustees. He also founded Westminster’s Blue Blazers Investment Committee and chairs the national Delta Tau Delta Investment Advisory Board. He works as a financial advisor with Wells Fargo Advisors. Ayers lives in Ballwin, MO, with his wife, Laura Dierberg Ayers, WWU ’82. Three of his four daughters, Kathryn Ayers Wickenhauser ’11 ΚΑΘ, Caroline Ayers ’14 ΚΑΘ, and Amelia Ayers ’16 ΚΑΘ, graduated from Westminster. His fourth daughter, Sarah Ayers ’21 ΚΑΘ, is a sophomore at the College.