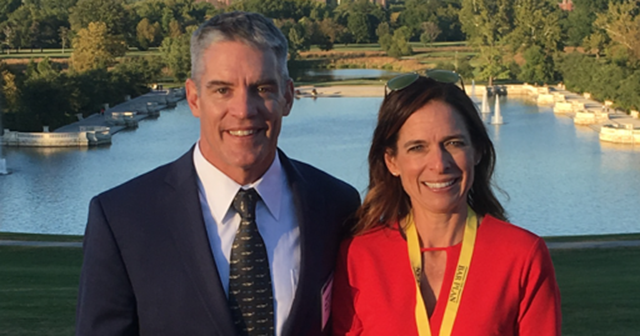 Elizabeth Brown Cole ’94, pictured with her husband, Morry, joined the Blue Jay Spirit Club to give back to the College where she played tennis while remaining highly academically active.

Westminster’s first comprehensive, nationwide athletic club is gaining traction since its initial formation in November 2018. Today the Blue Jay Spirit Club is made up of more than 60 alumni and friends who financially assist with the ongoing operations of the Department of Athletics. And while alumni response is promising, more supporters are needed for the demands of a college where 50 percent of the students participate in varsity and club sports.

One recent volunteer to sign on to the Blue Jay Spirit Club is Elizabeth Brown Cole ’94 ΚΚΓ, who credits her participation as a student athlete at Westminster as a major influence in her life. A corporate and transactional attorney in St. Louis today, Cole was actively involved in academics and a variety of activities while at Westminster. Cole majored in mathematics, was Kappa Kappa Gamma President, and served as the first woman Grand Marshall of the Skulls of Seven. She also played tennis.

Cole says that playing sports at an academically rigorous college was an invaluable experience, and she wants to help students today to be able to do the same. “The Blue Jay Nation Spirit Club supports students who want to continue to pursue their athletic and academic goals at Westminster,” Cole explains.

Interestingly, of Westminster’s approximately 8,000 living alumni, about 2,000 participated in sports during their college years. With such a strong athletic tradition, Cole says belonging to the Blue Jay Spirit Club is a way she chooses to give back to the College. “Being a part of the Spirit Club is a way to perpetuate something for Westminster athletes, who will treasure and develop from it and perhaps want to give back to Westminster themselves,” she says.

Ultimately, Cole says that playing tennis at Westminster is an experience that continues to reap benefits in her life. “In addition to life skills and great memories, having played a sport in college gives me credibility with my kids,” who Cole explains that she coaches in various sports today. Cole resides in St. Louis with her husband, Morry, and three children.