Alumna is Named Little Rock Teacher of the Year 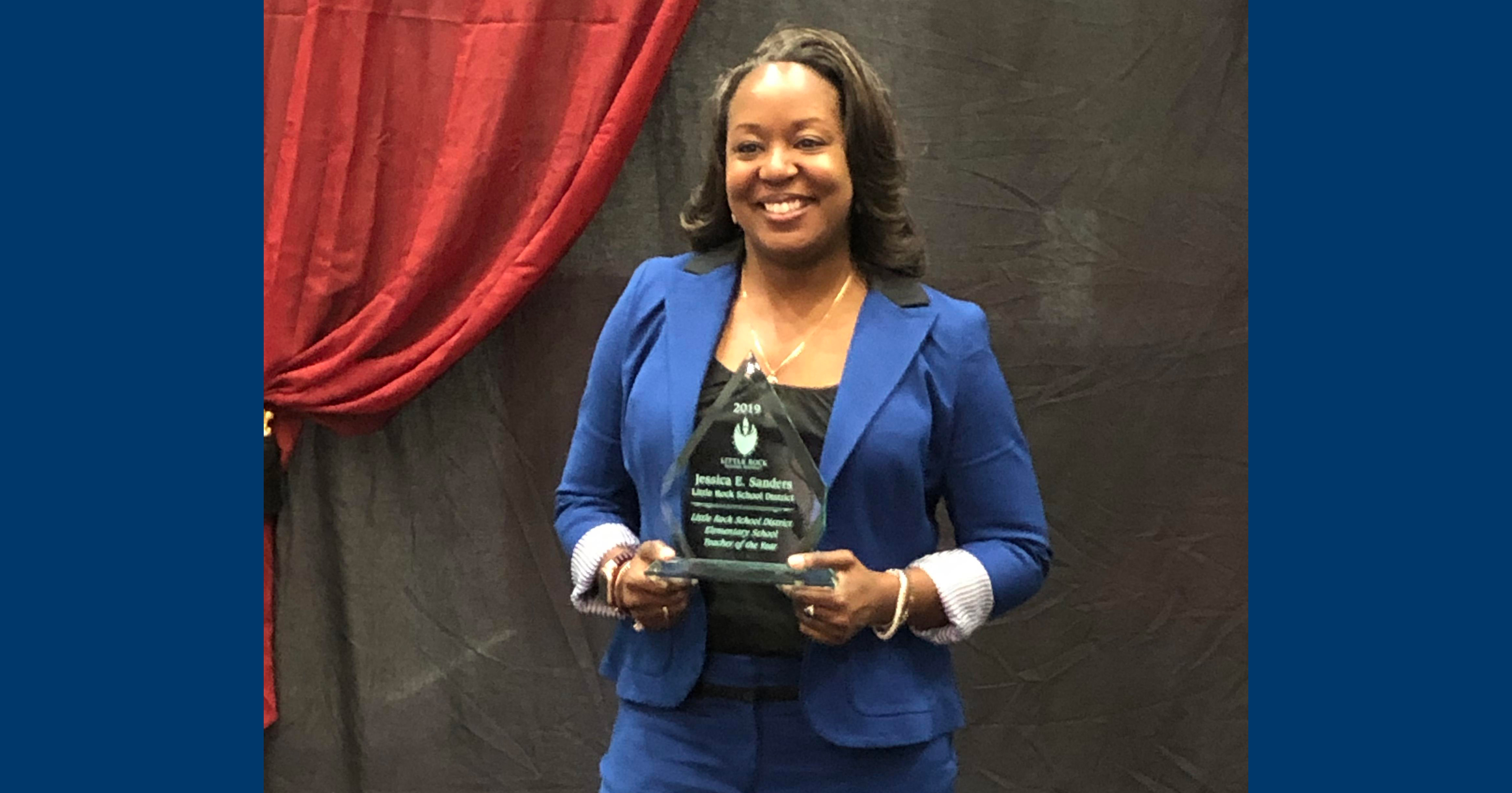 Jessica Sanders’ unorthodox approach to education led to her being named Elementary Teacher of the Year for the Little Rock School District in Little Rock, AR, on May 10. Sanders ’06 practices 10 minutes of yoga each morning with her first graders at Gibbs International Magnet School before beginning lessons.

“Yoga helps with the social-emotional and mental health needs of students in my classroom,” she explains, adding that she recently became a 200-HR Certified Yoga Instructor.

Sanders’ unconventional attitude toward her young students doesn’t stop there. After yoga, her young pupils sit on colorful, flexible seating under blue lights that are found to be calming. Watch this video of Sanders in action from Little Rock’s NBC affiliate, KARK.

Despite the accolades and news stories generated by her new title and crystal trophy, Sanders remains humble. “I was honored to receive this award, but I don’t deserve this honor any more than any other educator that is fully invested and engaged,” she says. “I am so humbled and so in awe of those amazing invested, gifted, wonderful educators.”

A native of Little Rock who grew up in the same school district where she teaches, Sanders has taught at Gibbs International Magnet School for 10 years. Initially, she taught pre-Kindergarten for six years, followed by one year of Kindergarten. Sanders then taught first grade for three years and says she is eagerly looking forward to a new position as International Studies Specialist. She will teach Social Studies, International Studies, and World Cultures to students in all grade levels this fall.

“Gibbs is a special school, in that the magnet program status grants all students the opportunity to learn a second language and learn about the world in context-relevant and standards-guided way,” Sanders explains.

When asked if Westminster helped form her non-traditional approach to the classroom, Sanders’ response is enthusiastic. “My parents raised me (us) to live lives of significance and service. Westminster’s focus on leadership and service reinforced the examples and expectations of my parents for what I believe are the pillars of citizenship and adulthood,” she says. “Everything about my time at Westminster supported the values I grew up with and believe in adulthood.”

Incidentally, Sanders is one of five sisters in her family who graduated from the College. Tamara Caston ’06, Jennifer Brown ’08, Jacquelyn Anthony ’11, and Jorden Sanders ’14 also call Westminster their alma mater. Sanders says emphatically, “Westminster is significant to our family!”

Also significant to Sanders while at the College were those who helped her with job placement and professional development: alumna Rebecca Adams ‘01; Jane Forsythe; and Drs. Aulgur, Serota, Cowles, Miller, and Crouse.

“My education at Westminster helped me to align my passion and purpose with the character and civic responsibility that is foundational to Westminster students and graduates,” she says.

When she isn’t teaching, Sanders takes the foundations of her Westminster education to heart, remaining invested in the Little Rock community as a volunteer. She also enjoys area food festivals and is an avid reader. But most of all, Sanders loves yoga and is eager about the opportunity to engage students and staff in yoga through her International Studies Specialist position after a well-earned summer vacation.