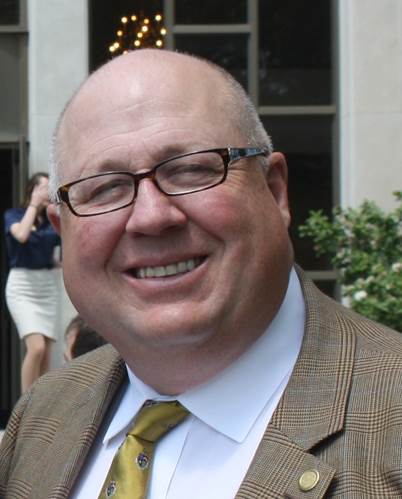 Steve Humphreys from St. Louis, MO, Class of 1983, will receive the Jack Marshall Alumni Loyalty Award at a special Alumni Honors Convocation Ceremony to be held at 10:30 a.m., April 25, during Alumni Weekend in the Church of St. Mary, Aldermanbury on the Westminster College campus in Fulton, MO.

Humphreys is Vice President and Partner of the Design Corrugating Company.

Established in 2009, the Alumni Loyalty Award is given to alumni who demonstrate a continued interest in Westminster College through their contributions of time, talent, influence and/or funds and who have demonstrated exceptional loyalty, commitment, dedication and service to the College.

In 2012, the award was renamed the Jack Marshall Alumni Loyalty Award in honor of  “Mr.

Westminster” himself whose passion for Westminster College was unparalleled.

“Westminster changed my life,” says Humphreys.  From the outstanding faculty to my experiences at Delta Tau Delta, I cannot imagine that I would have gotten this far in life without Westminster in my life.  To be associated with an award bearing Jack Marshall’s name is an honor I never dreamt of receiving.”

Humphreys has been a member of the Westminster Parents Association Council for eight years and served as President of the organization for three of those years.

He is a member of the Westminster President’s Club and the True Blue Society.

He has been a member of the Delta Tau Delta House Corporation for 20 years, served as Building and Grounds Chairman for many of those years and has been Treasurer for the past two years. In this capacity, he organized a number of meetings with all the House Corporations.

Humphreys is proud of having had  two daughters graduate from Westminster-Katherine (2009) and Sarah (2013).  He had the privilege of presenting her diploma to daughter Sarah at commencement.

His wife Betsy is also a Westminster graduate, Class of 1983.

“I pride myself on being a daily ambassador for the College,” says Humphreys.  “I believe in and love the place.”