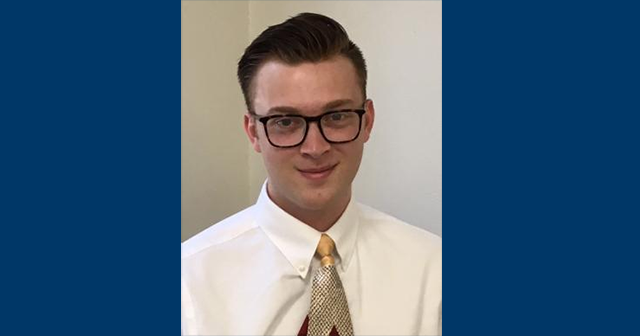 Sawyer Young ’18 is the recipient of a Mizzou Kinder Fellowship through the Kinder Institute on Constitutional Democracy at the University of Missouri-Columbia. Young, who is pursuing a master’s degree in history at MU, received the award June 7.

“I feel both deeply honored and flattered to have received an opportunity to work with the Kinder Institute as a graduate fellow,” he says.

Young emphasizes that his academic interests today have a firm foundation in the liberal arts education he received at Westminster. He explains, “My work is inherently interdisciplinary in nature, and Westminster’s liberal arts curriculum helped establish a strong academic foundation for me.”

In a discussion about his Westminster days, Young mentions one of his favorite faculty members is the late Dr. Robert Seelinger, who fostered his love of history and the humanities ever since he was a child growing up in Fulton. He also credits Drs. Sam Goodfellow, Mark Boulton, Cinnamon Brown, Heidi LaVine, David Schmidt, and Cliff Cain for offering unending support and guidance throughout his education.

Additionally, a few highlights from his undergraduate years were meeting Bernie Sanders at the 2017 Green Foundation Lecture, receiving the Harmon L. Remmell III Prize for his senior thesis, and relaxing on the Stinson Creek Trail behind campus.

Young adds, thoughtfully, “I do, however, think the best is yet to come.”