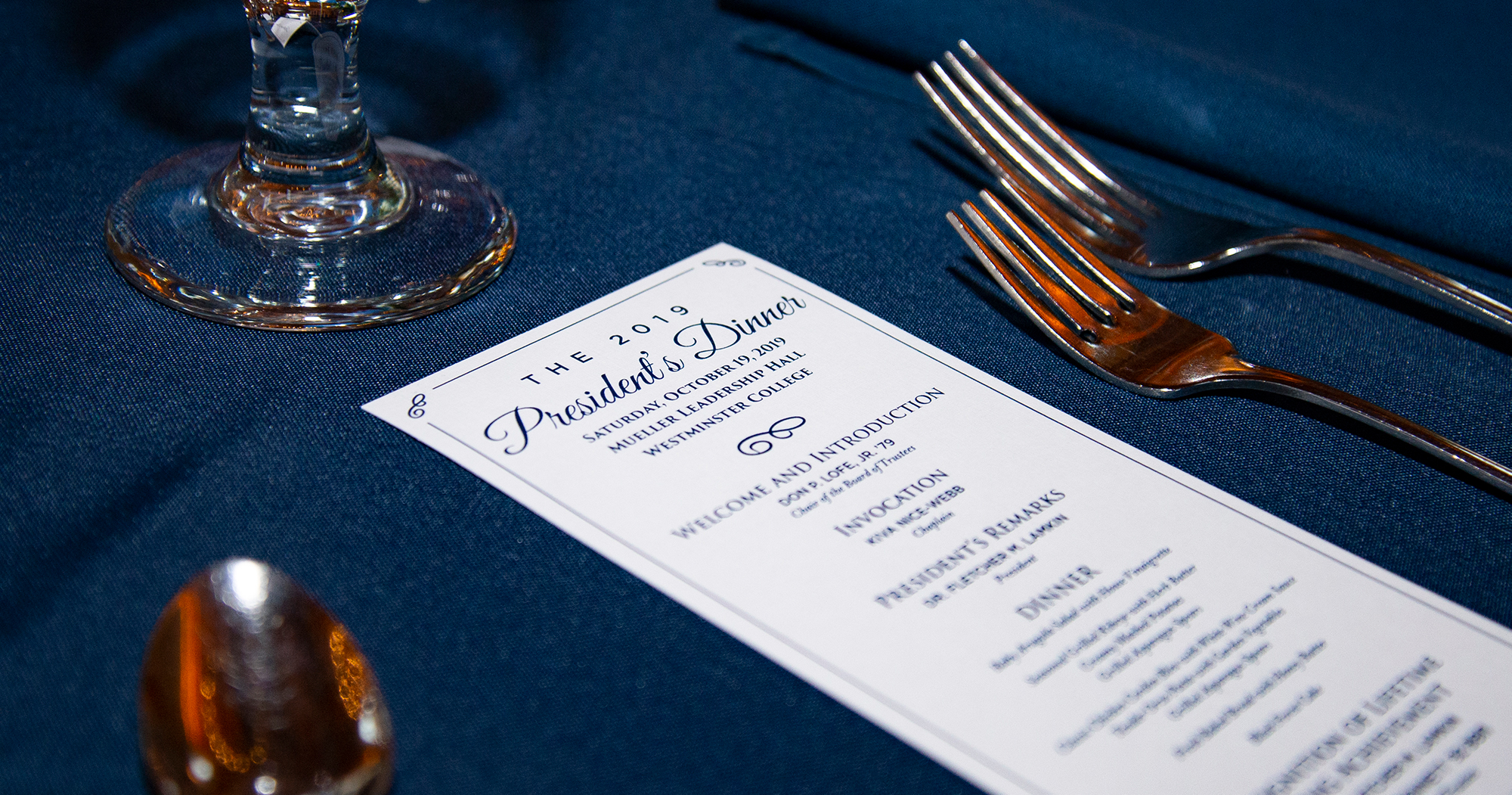 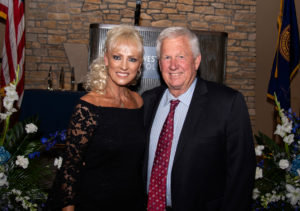 “This year, our President’s Club has, for the third year in a row, surpassed the 400-member mark,” Lamkin said. “We are grateful for your support, as you have made and are making a vital difference in the welfare of our College and our students.”

Lamkin proceeded to express his gratitude for all Westminster supporters and to summarize the progress Westminster has experienced in the past year. Highlights included the mentioning of America’s National Churchill Museum celebrating a successful 50th anniversary, the monumental anniversary and achievements of 40 years of women at Westminster and the positive progress on the College’s status with the Higher Learning Commission.

After dining, Board of Trustees Development Committee Chair Jim Bennett, ’92 Beta Theta Pi, expressed the College’s deep and lasting appreciation to those who have given generously to the College this year. Those specially highlighted were Lifetime Giving Honorees, based on their in-kind gifts received through June 30, 2019. Those honored are listed below:

Sentinels of the Columns

Bennett cordially thanked the following Leadership and Breakthrough Society members for their generous commitment to the College*. 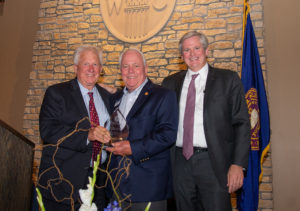 John T. Baumstark, Sr., began making $25 gifts to the Westminster Fund shortly after graduating from the College and has given generously over the years. He and his wife, Janet, consistently and generously give of their time, talent and treasure. They surpassed the $1 million giving mark last year. An inaugural donor to the President’s Club in 2000, the Baumstarks’ generosity has extended to financial contributions to the Sigma Alpha Epsilon house on campus. The couple consistently support the John T. Baumstark, Sr., Scholarship, the Chancellor’s Circle and the Westminster Fund. Finally, the Baumstarks are contributors to the Panettiere Challenge, which raised more than $2 million during Fiscal Year 2018. 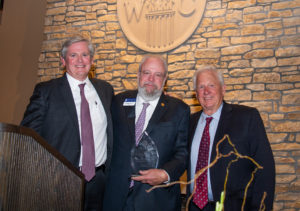 William D. Felder and his wife, Katharine, have generously supported college initiatives through the years, beginning in 2012 with the William D. Felder Leadership Grant to make a transformational difference in the life of a student who might not otherwise be able to attend Westminster. They also sponsored the beautiful William D. and Katharine C. Felder Center for Admissions and Student Financial Planning. They were members of the inaugural Chancellor’s Circle in 2016, making a transformational difference to the College with a $500,000 donation. The Felders supported the Westminster Fund and the Greek Challenge on behalf of Delta Tau Delta. Additionally, the couple recently endowed the William D. Felder Delta Tau Delta Leadership Scholarship in conjunction with the fraternity’s house corporation.  Finally, they regularly host events in their home to recruit future Blue Jays from the Dallas area.

Alan C. Henderson, ’68 Phi Delta Theta, and Vicki Henderson of Wilson, WY
Emeritus Member of the Board of Trustees 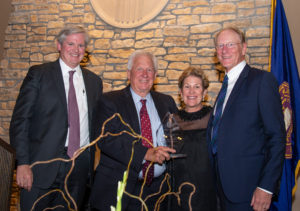 Alan C. Henderson and his wife, Vicki, share a legacy of giving that is as strong as their family’s Westminster ties — ties that include Henderson’s grandfather, Class of 1893, and father, Class of 1931. In the initial years following his graduation, Henderson gave loyally to the Westminster Fund nearly every year for several decades. Then, in the early 2000s, he established a $250,000 pledge to Westminster: half to support the Westminster Fund and half to launch the Phi Delta Theta capital campaign to renovate their beloved chapter house. Henderson not only chaired the campaign but donated the largest amount to the cause, giving nearly $400,000. In 2005, the couple made a leadership-level pledge to the campaign for Mueller Leadership Hall. Henderson served a distinguished term on the Board of Trustees from 2000 through 2011. He continues to give generously each year at the Platinum level of the President’s Club, proudly supporting the Westminster Fund and the President’s vision. 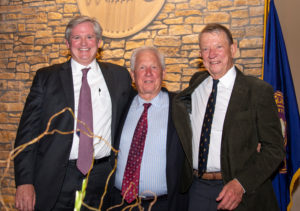 William E. Reller began his tradition of giving back to Westminster shortly after graduating. In 1998, he established the Robert L.D. and Lois B. Davidson Endowed Scholarship as a tribute to the legendary Westminster president. During the historic Campaign for Westminster, Reller made a leadership gift to the campaign for the beautiful Davidson Leadership Plaza. He also supported the historic renovation of America’s National Churchill Museum. Reller was one of the top donors to the Phi Delta Theta capital campaign, contributing a six-figure gift. In the two years since reaching the Leadership Society level of giving, Reller has nearly doubled his lifetime giving, which now stands at almost $2 million. He also holds Westminster’s record as the donor with the most endowed scholarships, establishing the Class of 1956 Endowed Scholarship as well as the Pat Kirby Endowed Scholarship. Reller joined the Chancellor’s Circle in 2016 and has continued his generous support to the Westminster Fund, supporting the Board of Trustees and the president’s vision with annual leadership gifts. Most recently, Reller is investing in refurbishing the plaques at the Davidson Leadership Plaza and is supporting the campus Veterans Memorial project.

Kent, ’62 Sigma Alpha Epsilon, and Judy Mueller of Paradise Valley, AZ
Board of Trustees Member Since 1994 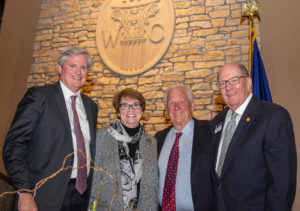 Last year at the 2018 President’s Dinner, Westminster celebrated with great fanfare the unparalleled gift by Kent and Judy Mueller to build a new athletic stadium. The College is still celebrating the enormity and generosity of their gift. Mueller came to Westminster more than 57 years ago on a baseball scholarship, and he never forgot the college he loved. As a result, the Muellers saw the Mueller Student Center rise in 1999, the development of the Mueller Leadership Hall in 2007 and the first phase of Blue Jays Stadium in 2018. Mueller’s love for his fraternity made him a leader in the Sigma Alpha Epsilon Capital Campaign, which reached its successful conclusion in 2014. In addition, the Muellers became lifetime members of the Chancellor’s Circle in 2016, are members of the President’s Club, supported the Panettiere Challenge in 2018 and are members of the True Blue Society.

The evening concluded with remarks by Timothy Riley, the Sandra L. and Monroe E. Trout Director and Chief Curator of America’s National Churchill Museum. Riley warmly welcomed Dr. William E. Parrish to the Association of Churchill Fellows. He then concluded the evening by highlighting the 50-year anniversary of the church and museum, which was “audaciously moved from central London to mid-Missouri.” Celebrations this year garnered media attention from the Los Angeles Times to the New York Times, resulted in a warm letter from Prince Charles and, ultimately, led to $1 million in donations and a 27 percent increase in museum visits. 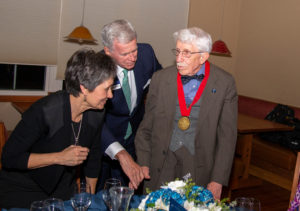 The former Harry S. Truman Professor of American History, Dr. William E. Parrish joined the Westminster faculty in 1955. He became College historian in 1965. Although his tenure at Westminster lasted until 1978, when he joined the faculty of the Mississippi State University in Starkville, Parrish’s love for the College continued. Parrish and his wife, HelenSue, return regularly to campus for Alumni Weekend, President’s Club and other Westminster celebrations. The author of Westminster’s beloved Westminster College: An Informal History: 1851-1999, Parrish is an eyewitness to and participant in history. For anyone who wishes to learn more about Churchill and former President Harry S. Truman’s visit to Westminster in 1946, Parrish’s chapter “The Churchill Visit” is a must-read. Parrish is worthy to be called a Churchill Fellow on behalf of the Association of Churchill Fellows of America’s National Churchill Museum.

To learn more about or to join the President’s Club, please contact the Gina Campagna at Gina.Campagna@westminster-mo.edu, or go to our website here.

To see a full gallery of photos of President’s Dinner 2019, go here.