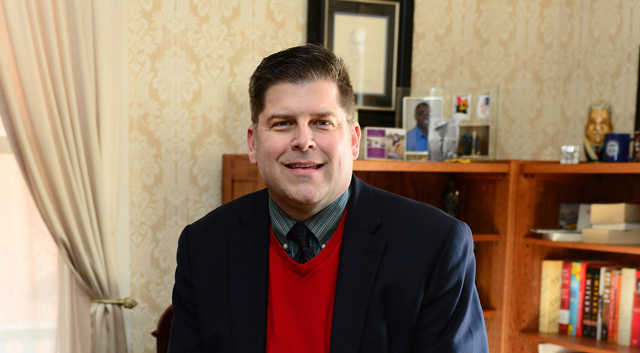 Dr. Kurt Jefferson, Assistant Dean for Global Initiatives and Director of the Churchill Institute for Global Engagement, has been selected by the Association of International Education Administrators to participate in its inaugural Senior International Officer (SIO) Academy at Duke University in May. He was one of 17 higher education leaders in the United States selected.

The SIO Academy is for university and college chief global leaders who are responsible for coordinating, overseeing, and providing primary leadership for global and internationalization efforts on their campuses.

SIO Academy participants were selected via a competitive application process. SIOs had to be in their first five years on their campuses. Jefferson is completing his fifth year as Westminster’s SIO and also serves as professor and chair of transnational and international studies as well.

The SIO Academy will focus on campus internationalization, curriculum, assessment of global activities, strategic planning, communications, global partnerships, and faculty development. Leaders from several American universities including Duke, Purdue University, University of Tennessee-Knoxville, and the University of Richmond will be leading the weeklong academy.

Jefferson, who has taught, researched, and administered in higher education at four different campuses in a 27-year career, came to Westminster in 1993. He has served as chair of the political science department at various times and chair of the social sciences division (2004-07). His areas of expertise include European politics, transnational studies, and global leadership. In 2008 and 2010, Jefferson served as visiting professor of global business and politics at ICN Graduate Business School in Nancy, France (which houses one of Europe’s top 60 graduate programs in business management according to the Financial Times).

In 2010, he won a United States Department of State and Carnegie Corporation grant for the Council of Independent College’s “Middle Eastern Culture and Islam” study tour of Jordan in which 12 small college professors were chosen from a pool of 70 candidates to spend nearly one month touring, studying, and interacting with leaders in that Middle Eastern nation.

He has published numerous scholarly articles and two books, the most recent being Celtic Politics: Politics in Scotland, Ireland, and Wales (2011). He also has won several teaching awards at the University of Missouri-Columbia and Westminster and was named in 2007 as one of the “Top 10 Legends of the Faculty” by the Westminster Alumni Association. He was also recognized by Marquis “Who’s Who in America” in 1998.

The Churchill Institute for Global Engagement (CIGE) was founded in 2008 and provides global academic and co-curricular programing such as the transnational studies and international studies major programs, Study Abroad and Off-Campus programs, global summer programming for high school and college students, the Model United Nations program, the college’s Honors Program, the Hancock Symposium at Westminster College, and the John Findley Green Lecture series and IBM Lecture series. The CIGE also serves the chief diplomatic arm of the college and during Jefferson’s tenure the college has connected with, signed new partnership agreements, and maintained partnerships with higher education institutions, governments, and businesses in Britain, China, France, Jordan, Mongolia, Russia, South Africa, and Turkey.