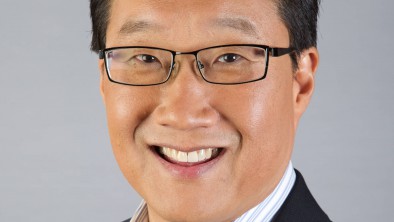 What’s he been doing since he left ESPN? Working at the cutting-edge forefront of the media industry with 120Sports.

A revolutionary live-streaming network that launched in June, Chicago-based 120Sports caters to the digital generation, providing game footage, analysis, conversation, and social commentary on Android and Apple devices and online.

In addition to its tailored digital delivery approach, 120Sports stands out for its partnership with multiple leagues and content properties, including MLB.com – the first media venture to snag such connections.

“120Sports is different than anything I’ve ever done,” says Kim.

Read on for more about 120Sports and Kim’s new role, plus his s advice to  students considering careers in sports media.

Kim is one of two hosts at 120Sports, joining Dave Ross, former Washington D.C. sports anchor. Together, the two introduce the latest sports news – segments presented 120 seconds at a time – leading and capitalizing on the latest trending sports topics online.

“We hammer out a topic in two minutes,” Kim says. “But we don’t come to a conclusion. We leave it to the audience to continue the conversation.”

As host, Kim describes 120Sports as free form compared to the heavily scripted and tightly produced SportsCenter: “120Sports is so loose – it’s almost like live radio.”

The hosts don’t always know where the conversation is going, and the guests and other talent on the show often drive direction.

For example, former pro athletes discuss games, plays and topics with an unscripted take on how they see things. On ESPN, those same athletes provide analysis, but more strictly respond to planned questions from the hosts. In comparison, on 120Sports, they may drive a segment with unplanned, stream-of-thought commentary.

“We start at point A, but where we go is where we end,” says Kim.

According to Kim, 120Sports’ league affiliations are vital to its success and one of the reasons why he decided to take the opportunity.

Traditionally, MLB has been very restrictive concerning video usage rights, but is “ahead of the game” when it comes to technology, says Kim. Bringing both exclusive video rights and technological capabilities through MLB Advanced Media, MLB’s partnership with 120Sports facilitates a perfect crux of content and delivery.

In addition to MLB, Kim says the support of other leagues and companies has been phenomenal. Offered as an app both on Android and Apple devices, 120sports delivers the content the digital generation wants and how they want it.

Geico, Verizon, Nissan, Transamerica, and Apple are a few of the businesses that lined up to get 120Sports off the ground.

“You usually don’t have that kind of firepower coming out of the gate,” Kim says.

The Beauty of 120Sports’ Digital – and Very Mobile – Delivery

“You don’t have to be a cable subscriber to access our content,” says Kim, a feature which fits many digital natives desire to stay connected without being tethered – choosing to solely use mobile phones, for example, instead of landlines.

120Sports also fits today’s generation that takes in media via multiple screens simultaneously, watching on TV with their mobile phones in hand, and wants to connect everywhere and anywhere they are.

“When I came out of school, if you wanted to be on TV, you either (1) went to journalism school, or (2) worked in media and climbed the ranks,” says Kim. “Today, a 12-year-old kid who wants to create a blog and write about something can.”

“There’s no limit to what you can do,” says Kim, although he cautions that starting out online with a blog, for many, may be more a labor of love than for money.

Kim says many of the walls of the traditional media industry have disappeared at 120Sports.

“Everyone is starting at ground zero. We can jump into ideas from anyone, even young production assistants,” he says and points out that those young staffers are 120Sports’ target demographic.

For students who want to pursue a career in sports media, Kim encourages internships and classes that will help them learn how to be successful presenters – citing English, history, speech and drama, and writing classes in particular.

“Take America and World History. Know how to compare and contrast great moments in history,” Kim says, pointing out how the best sports writers are those who make analogies.

Speech and drama classes help students get a feeling of what it is like to present.

“You really have to be bigger than yourself on camera or behind the mike,” he says.

As a final word of advice, Kim says you have to have a true desire to be successful in sports media. Nine-hour, non-stop days are common, and Kim says he’s always working, making notes, checking scores and Twitter. Sports media professionals often have to move, and they give up their weekends to cover events.

“You’ll miss a lot of special events in friends and family’s lives to get to your ultimate goal,” he says. “You have to love it.”

And it’s clear that Kim does – and that he’s happy on his unchartered ride and role with 120Sports.

“I didn’t want to be sitting at the gate when the plane takes off, saying I should have been on that plane,” he says about making his decision to leave ESPN and join 120Sports. “I know where this industry is headed. I want to be part of it, and these guys know what they are doing.”

Kim returned to campus to deliver the commencement address at Westminster in 2008 (photo below), and he says he drives by every time he is back in the area.

“A drive up the Hill is part of every trip I make back to mid-Missouri,” he says. “One time I almost missed a flight because I had to do it.”

A former Blue Jays baseball player, Kim graduated with a bachelor’s degree in political science and business administration from Westminster in 1987. 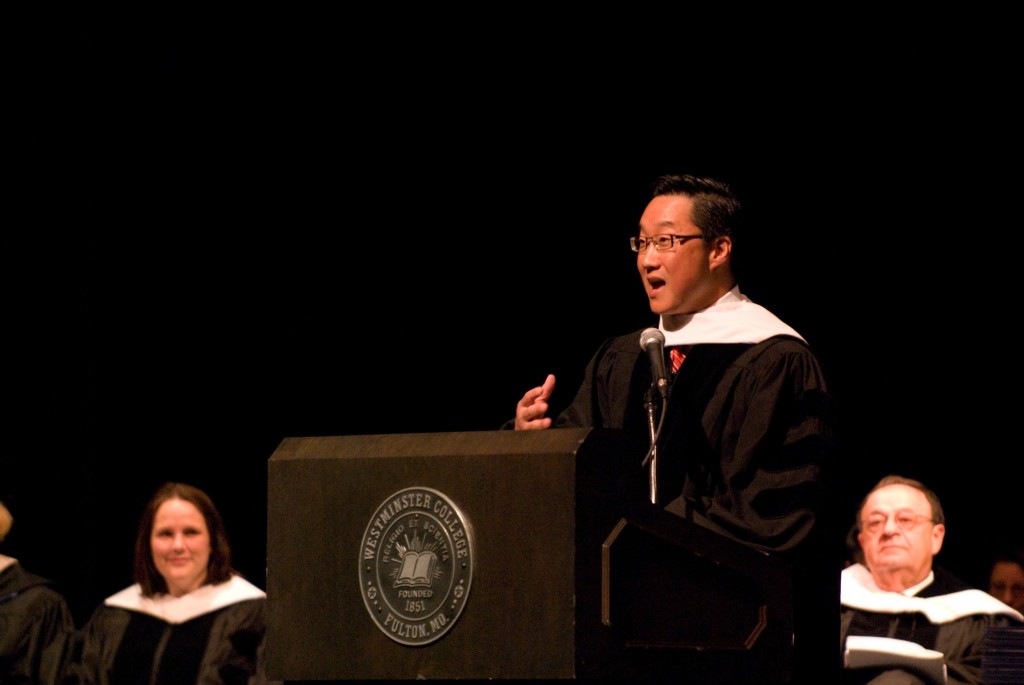