Westminster College is proud to announce that the first woman to graduate from the College will introduce the first female U.S. Secretary of State at the 59th John Findley Green Lecture at 1:30 p.m. on Sept. 19 in Champ Auditorium. Janice Mathews-Gordon, ’81, will introduce Dr. Madeleine K. Albright at the much-anticipated lecture, which officially caps off the two-day Hancock Symposium on the Westminster campus.

Mathews-Gordon’s presence on the stage is significant for Westminster — this year celebrates the anniversary of 40 years of women at the College.

Read more about Mathews-Gordon below and find out how she transitioned from a prank-dodging RA in Marquess Hall to a member of the Westminster Board of Trustees to an accomplished artist with the most enviable job at the Green Foundation Lecture this year.

Janice Mathews-Gordon transferred to Westminster in 1979 and took up residence at Marquess Hall with her husband, Kevin Gordon, ’81 ΔΤΔ, two weeks after the couple married. She served as the sole women’s resident advisor to the entire female population in the top floor of the dormitory, whereas Gordon served as a resident advisor to the men downstairs. She recalls her role as daunting. 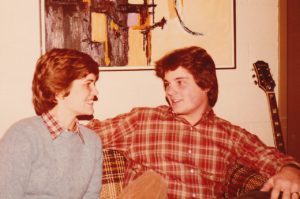 “While the job of RA usually involved dealing with infractions and disruptions, ours centered on providing constant support for the freshman women,” Mathews-Gordon reflected in a 2014 Leadership Magazine article, in which she recounted details of a sometimes hostile male environment. “They [the women] knocked on our door day and night, sometimes tearful, sometimes smiling, but always with a story to share.”

“After 128 years as a men’s college, Westminster’s first class of women came to Fulton, all 32 of us, in the fall of 1979. I was one of three female transfer students, joined by 29 female freshmen. Much like today, colleges were largely coeducational, and overwhelmingly so in the Midwest, so we arrived on campus wide-eyed, optimistic and wholly unprepared for what we would face.” – Janice Mathews-Gordon, ’81, Leadership Magazine, Fall 2014

After graduation, Mathews-Gordon worked as a graphic designer in St. Louis, MO, and then Oklahoma City, OK, before opening her own business in 1988: JMG Advertising Design, Inc. She explains that running the award-winning agency was possible, in part, because of her Westminster education.

“I took the broad-based liberal arts curriculum the College is known for, and I learned to write — well. This strong foundation was critical to me in the years to come,” she says emphatically.

By 2008, Mathews-Gordon’s interests moved into the fine-art arena, and she began a successful career as a mixed-media painter. Since that time, she has exhibited her paintings, which highlight aspects of the human experience, in numerous national and regional shows.

Mathews-Gordon’s newest series of abstract paintings was featured in a solo exhibition in August, titled “All My Sisters.”

“These paintings celebrate the lives and hopes of all women, my sisters in the broader sense,” Mathews-Gordon explains.

One of 13 family members to attend Westminster, Mathews-Gordon and Kevin, an attorney, recently celebrated 40 years of marriage. They reside in Oklahoma City and have two grown children: Trace Gordon, ’13 , who lives in Germany and owns a full-service marketing company, and Elise Gordon, a third-year medical student at the University of Oklahoma.

And don’t assume because she blazed a trail while at the College that she veered off that path: Mathews-Gordon has remained a lifelong Westminster champion. As a young alumna, she volunteered in Oklahoma City as an Alumni Ambassador, helping recruit high school students to the College. She then served on the Board of Trustees from 1997 to 2006, delivered the Convocation address in 1999 and has served as a featured speaker on panels focusing on Westminster women.

Interestingly, for more than 20 years, Mathews-Gordon has been the hidden presence behind the Westminster logo, which remained in use until a recent update.

Last, but definitely not least, Mathews-Gordon is one of six founders of Westminster Women Advancing Together, an alumnae initiative that she says is near and dear to her heart.

“We seek to recruit, retain and advance Westminster women, thereby strengthening the college that I love,” Mathews-Gordon explains.

Ultimately, despite the many Westminster roles Mathews-Gordon has played throughout the years, she says nothing compares to the role she is about to play next week.

“I am honored and humbled to have the opportunity of introducing Dr. Albright on behalf of the College,” Mathews-Gordon reflects. “Dr. Albright is a woman I’ve long admired … a gifted leader of incredible strength and decisiveness, with remarkable strategic negotiation skills. She’s truly one of my heroes!”

For a complete schedule of the Hancock Symposium, including the John Findley Green Foundation Lecture, go here.