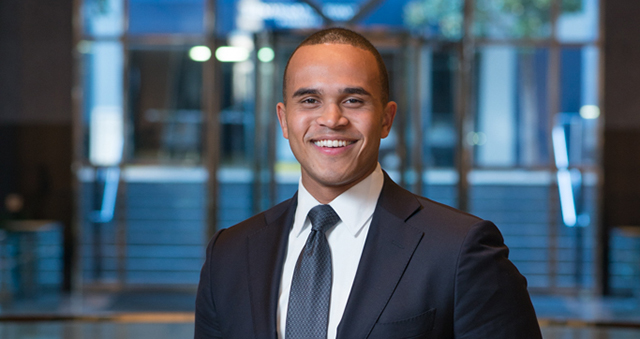 Benjamin Bor ’13 didn’t set out for a job in public finance, but when a career shift presented itself within his firm, he embraced the opportunity and never looked back.

Early mornings and late nights — that’s life in public finance. And for Benjamin Bor ’13, a public finance investment banking associate with Hilltop Securities in Dallas, the office is exactly where he wants to be.

“It’s a lot of hours, definitely,” says the Dallas native about working for Hilltop Securities’ Public Finance department (which ranked as No. 1 financial advisor in the nation for 2015). “A lot of number crunching, a lot of detailed work. You have to sit down, grind it out and learn what you’re doing. There’s a lot of learning, a lot of mistakes — but there’s a whole lot of reward, too.”

As much as he loves what he’s doing, Bor didn’t start out in public finance investment banking. When he joined Hilltop Securities after graduating from Westminster, he was hired for an clearing services role, a back-office kind of job. Three months into the new position, he received an email about taking an aptitude test that could lead to an interview for the firm’s public finance investment banking division. Bor took the test, moved on to the interview round and was offered a job as a public finance analyst.

“I was kind of blindsided by this transitional switch because I had an entry-level job and wasn’t really sure what I wanted to do,” says Bor, who has since been promoted to his current role as investment banking associate. “So when I got this job, it ended up dawning on me that this could be my career.”

That job includes an early-morning wakeup call so he’s ready and at the office between 7 and 7:45 a.m. Bor reads the Wall Street Journal on his commute so he’s up-to-date on the numbers and financial news of the day. Then it’s off to the races, working on small projects for his banker throughout the day and assisting him however he can.

If it sounds like a lot of numbers and business, Bor insists there’s more to it than that.

Bor describes what it’s like to get an in-depth look at how municipalities work, whether it’s an airport, water districts, cities or towns. His enthusiasm is palpable.

“Take a city like Fulton, for instance,” he says. “The city might need roads but might not have the money to do that. So how do you do that? I get to see real projects get put into place and have a real impact on people’s lives. You get to see how these cities solve their problems. I love that part.”

On Westminster Opportunities and Impact

Bor’s passion for his job is strong, but then so is his appreciation for Westminster as the place where he got his start. A business administration major – active in Student Government Association, Blue Blazers Investment Committee, Student Ambassadors, Churchill Singers, and Delta Tau Delta – Bor credits the impact of Westminster’s liberal arts education.

“It’s a place where the environment makes it easy to succeed if you’re committed and diligent,” says Bor, whose grandfather attended Westminster in the mid-’30s,. “There are so many opportunities available to you there, so many classes and resources.”

Sometimes the benefit of such well-rounded class schedules shows up when you least expect it. In fact, it was during the interviews for his current job when Bor tapped into things he learned from a class taken outside of his major.

“I actually talked constitutional law in my interview because one of the bankers who interviewed me was a pre-law major,” Bor says. “Because I took that class at Westminster, I was able to talk to him about things that I wouldn’t have known about otherwise.”

Bor also notes the benefit of Westminster’s diverse campus. “The international aspect of Westminster is huge,” he says. “There are a lot of different people from a lot of different cultures that I work with within the cities. Being able to say that my college was hugely diverse for a school of 1,000 people, give or take, has been really helpful to me in the working world.”

For Bor, that working world is one he’s more than happy to continue finding his way through.

“I see myself progressing in my career and moving up the management ladder,” he says. “I love my job, and I’m good at it. That’s pretty cool to be able to say that.”

With his career on an upward trajectory, Bor is looking for ways to make a community impact as well.

“My primary goal right now outside of work is finding and getting involved in an organization that reaches out to city youth and focuses on the importance of education,” he says. “I strongly believe that placing an emphasis on learning while young is the greatest way to combat some of the societal issues underprivileged youth face.”

Bor also hopes to help future classes of Westminster students. The College’s alumni connections, particularly through his affiliation with his Delta Tau Delta fraternity brothers, have been a great asset to him while navigating the working world post-graduation.

“Joining Delt at Westminster allowed me to connect with alumni in the field I was interested in. The alumni helped guide me and offered insight into challenges that I might face, which helped make the transition into the working world much easier,” he says about preparing for his career while at Westminster.

“They’re the ones who told me to show up early, work late and suit up,” Bor says about the alumni support, “and those are the little things that have made a big difference. I’d tell students now to just take advantage of the resources available to you at Westminster. Don’t be afraid to jump in and immerse yourself.”

There’s a lot of work involved, Bor says, both as a student at Westminster and after graduation. But all that hustle pays off in the end.

“They grind you down, but when you get out, you realized you’re a pretty polished individual,” he says.