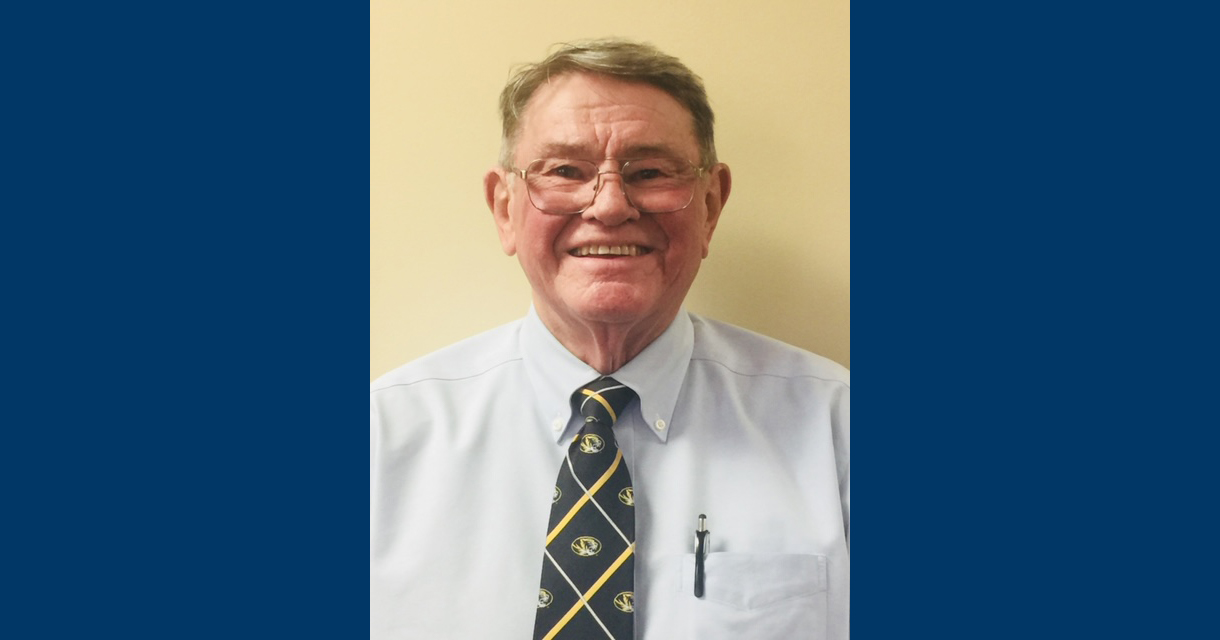 Joe Holt, ’62, of Fulton, MO, was awarded the J.H. Atkinson Award at the annual Callaway County Chamber of Commerce banquet on Jan. 23 at 54 Country in Fulton. The well-respected accolade recognizes a member of the local community who uniquely contributes to the area by going beyond the duties of his or her profession.

A long-time attorney and fixture in the Fulton community, Holt is a former judge who also served as a Missouri state representative from 1966 to 1983, where he was House majority floor leader. He also served on the Judiciary Committee and as chair of the Executive Reorganization Committee and chair of the Committee on Rules and Procedure. In addition, Holt was commissioned as a second lieutenant in the U.S. Army. He majored in political science at Westminster and graduated from the University of Missouri School of Law in 1967.

Holt is affiliated with Riley and Stingley, P.C., a law firm in Fulton that was founded by fellow alumni Thomas Dunlap, ’71 ΣΑΕ, and Thomas K. Riley, ’93.

Read further to learn about Holt’s love for Callaway history, his Westminster favorites and why his locally familiar license plate has been stamped “357” since 1977. Hint: It has nothing to do with a revolver.

Where are you from originally?

My parents lived on a farm near Concord in northern Callaway County, so our doctor was in Mexico. I was born in Mexico, MO, and raised in the Concord community. I graduated from Fulton High School in 1958.

Can you describe your early career and how you became a state representative while attending law school?

Although I was a second-semester law student, I announced my run for the office and campaigned like mad all over the county in the summer of 1966. I won the nomination and then the election in November. Trying to complete law school and serve as a representative, I took a half load of classes in the spring of 1967, and in the summer session completed my last course and was granted a J.D. I served in the House until 1983, when I returned to my law firm full time for the first time since being admitted in 1968.

Please discuss the years you served as a judge. Can you tell us anything about the most interesting cases you witnessed during those years?

In 1998, I announced my candidacy for associate circuit judge, and the incumbent judge in that position resigned. Governor Mel Carnahan appointed me to the unexpired term, and I was elected in the fall. I served in that position for eight full years plus the eight months of the prior term. In January 2007, I went back to the law practice where I am now. Judgeship was very interesting, but it was a bit too isolating for me. You don’t have the ability to mingle and discuss matters in the same way as you do in private practice or in the Legislature. It was stressful at times but generally very enjoyable. I cannot identify cases, but one was particularly interesting, as it involved a disabled adult and his warring parents. 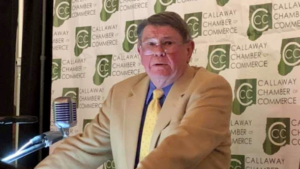 Joe Holt received the J.H. Atkinson Award on Jan. 23 at 54 Country in Fulton. Photo courtesy of the Callaway County Chamber of Commerce.

How did you feel about receiving the J.H. Atkinson Award?

I very much appreciate the J.H. Atkinson Award. It is Callaway’s highest award for service to the community.

Please discuss your interest in local history and the Callaway County Historical Society.

The history of Callaway County has always been a favorite subject of mine. My Holt ancestors came here in 1819, among the first wave of settlers. My first searches into history involved that family, then my mother’s, then my father’s mother’s ancestors and so on. I was invited to be a board member of the Society in the late 1990s, accepted and got hooked with the Society and its goals to collect, preserve and distribute the County’s history. I still am today. We have grown and moved from the Tuttle House at 7th and Westminster [now the Churchill Institute for Global Engagement on the Westminster campus] to downtown Fulton. We have added a research center on East Fourth Street. It is a great resource for those, as I was earlier, looking for a place to find their history. Today, as chair of a couple of committees and a semi-official fundraiser, I continue to be active in and passionate about the Society.

What organizations do you belong to?

I am on the board of the Fulton Public Schools Foundation and a past president of that organization. I’m  a member of the Kingdom Supper Committee and past president of the Supper. I am a member of the Callaway Chapter of the MU Alumni Association and on the Committee to Organize Callaway 200, the steering group of the bicentennial celebration for Callaway. I am a Chamber Ambassador and a 52-year member of the Fulton Breakfast Optimist Club, serving as president on two occasions. I am a senior counselor of the Missouri Bar Association, and I’ve been a member of Fulton Lodge #48 AF & AM for more than 50 years.

In addition to the J.H. Atkinson Award, what other awards and recognitions have you received?

I was given the Sun-Gazette McCubbin Award in 1979, while in the Legislature, for service to Callaway and in recognition by the Missouri Supreme Court for service to the judiciary and courts, among other awards by statewide groups for support that I gave them in that time of service in the Legislature. I was twice awarded the St. Louis Globe-Democrat Outstanding Legislator Award.

Why is your license plate labeled “357”?

I got that plate in 1977 as majority floor leader for the House from Governor Joe Teasdale. “357” was the lowest number available. In 1962, Governor John Dalton gave me 2264, which I still have.

Do you recommend Westminster to prospective students?

Yes. Westminster provides you with a chance to grow, learn and mature. You have the opportunity to do great things, and it is filled with faculty who can help, direct and assist the students.

Dr. David Horton was the head of the Political Science Department and lived on St. Eunice Road in Fulton. We became great friends, as I did with Dr. Russ Jones. Russ became a special friend over the years, although he scared the heck out of me while I was his student!

I am married to Virginia Young, who retired as bureau chief with the St. Louis Post-Dispatch in Jefferson City after covering the state capital for 26 years. She does adjunct work for the MU School of Journalism.

I was married to Molly Deiter from 1966 to 1983. We have three sons: Ned, who will be promoted to colonel in the U.S. Army in March 2020; Dan, who lives in one of the most historic homes in Fulton, which is said to be a General M.F. Bell design; and Phil who is, a member of Phi Delta Theta and attended Westminster in 1990. He just retired as a captain in the U.S. Army and is employed in the civil service in Hawaii. Virginia and I also have two daughters: Zoey, a computer engineer in San Francisco; and Jenna, who is assistant director of marketing and communications in the Office of Admissions for Colorado College in Colorado Springs.

It Happened in Callaway by Carolyn Paul Branch, which just came out.

I watch MU basketball and football. I have season tickets for MU football, men’s and women’s basketball, and I attend most home games. I also travel — we spent nearly a month in Berlin, Prague, Vienna, Hallstatt and Salzburg last year, and I went to Northern Italy the year before. We are headed to Australia for the Ned’s promotion ceremony. Bicycling is also a passion, as we did a tour around Richmond, Jamestown, Yorktown and the James River area of Virginia last September and plan a Spokane-to-Coeur d’Alene trip this fall.