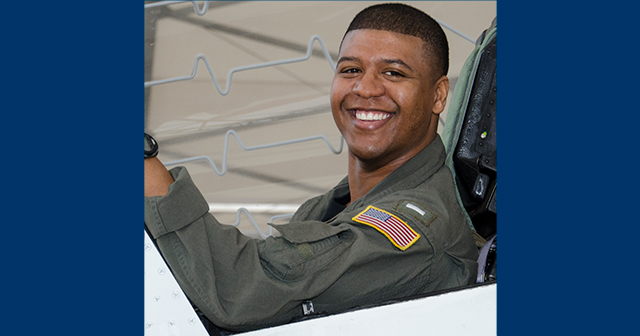 Michael Harris Jr. ’08 ΣΑΕ of Norfolk, VA, received the coveted U.S. Naval Wings of Gold in March during a formal ceremony at Naval Air Station Kingsville in Kingsville, TX. The wings signify Harris’ status as a Naval Aviator and an end to more than three years of grueling Naval flight training.

“Naval Aviators are trained to fly in regions of conflict and to handle numerous stressful situations,” Harris reflects. “It may sound strange, but the thing I most and least like about the profession is that each day in the plan is unpredictable.”

Read further to learn how the history major from St. Louis, MO, manages the unpredictable — including eight moves in 10 years — and how his Westminster College education helped him discover both the power in purpose and the love of his life.

Tell a little bit about your career with the Navy. I joined the Navy in 2009 as a Naval Aircrewman on the C-2 Greyhound. I worked my way to Crew Chief from 2010 to 2015 before being commissioned as a pilot in July 2015. I’m currently learning my fifth aircraft in four years and have flown single- and multi-engine engine prop and turbo-prop planes (Cessna  172, T-6 Texan, and T-44 Pegasus) as well as a single-engine jet aircraft (T-45 Goshawk). I’m currently learning to fly the C-2A Greyhound.

What’s it like to be a Naval Aviator? Military flying is much more unpredictable than commercial flying. Naval Aviators fly all types of aircraft and missions, and a few platforms, like the C-2A, are capable of shipboard operations. Naval Aviators must train to be precise enough to safely land on fixed land locations as well as the steel runways floating in oceans all over the world, known as aircraft carriers. We are trained to fly in regions of conflict and to handle numerous stressful situations, but there are situations that require sound judgement due to a lack of written procedure. It is up to the pilot to execute to the best of one’s ability to ensure we bring ourselves, our crews, and our aircraft back from the mission.

What has been a highlight of your career? The Navy has taken me all over the world, from Africa, the Middle East, Central America, and Asia, in support of carrier operations. I was fortunate to be able to be a part of the humanitarian efforts in Japan after the earthquake and tsunami devastated the islands back in March of 2011. We were tasked with getting supplies and personnel from shore to the USS Ronald Reagan so the MH-60s could fly them into inaccessible regions. 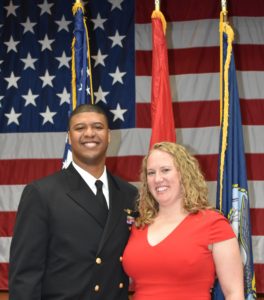 Michael Harris Jr. and his spouse, Ciera (Saxe) Harris, are Westminster alumni from the Class of 2008.

What role did Westminster play in leading you to your current position? Westminster showed me how big the world really is. I come from a military family, so I knew that was something I was seriously interested in continuing, but Westminster solidified which branch I was going to serve in due to the exposure to so many different people and cultures. Westminster also allowed my path to cross with my wife, Ciera. She has been by my side since we graduated in 2008.

Do you have a favorite Westminster memory? There are too many to choose from, but it isn’t so much a memory as it is an experience. Growing up in inner city St. Louis, you see people from all walks of life, but very rarely do you get a chance to build meaningful relationships with people from all over the country, and more broadly, the world. My colleagues are always astonished when we end up operating somewhere in the world, and I tell them I know someone from this country … especially since Westminster was a relatively small school in comparison to theirs.

What achievement are you most proud of? Every single milestone I’ve ever accomplished, because every milestone has led me to where I am in life. My grandfather used to tell me, “Every new challenge in life will be the most difficult challenge you will ever face. It’s taking that first step towards that goal that makes the difference.” I had a complete stranger, during a random conversation, tell me, “Never be the one to tell yourself you can’t do something without trying it first.” I hold these words in the back of my mind whenever I have that moment of doubt about accomplishing a task.

Would you recommend Westminster to prospective college students? I would absolutely recommend Westminster. Being fortunate enough to attend this school, I’ve made lifelong friends and was even fortunate to have met my spouse there. It is an experience that can’t be duplicated, especially with the valuable international student presence there at the time. Having the opportunity to meet so many awesome international students really helped feed my desire to travel and embrace new experiences.

Favorite spot on campus? The Stinson Creek Trail, behind the school, and Hunter Activity Center. The Glass Room was a frequent spot for Patrick Clark and myself due to the accessibility of the piano.

Favorite Movie/TV Show? Movies: The Shawshank Redemption and What Dreams May Come; TV shows: Game of Thrones, The Handmaid’s Tale, and anything narrated by David Attenborough.

What do you do in free time? Ciera and I try to live life. Ciera is a travel guru and is great at finding activities everywhere we’ve lived. We both love traveling and have visited 46 out of 50 states and more than 30 countries.