Alumnus Attends Conference at the Churchill War Rooms in London 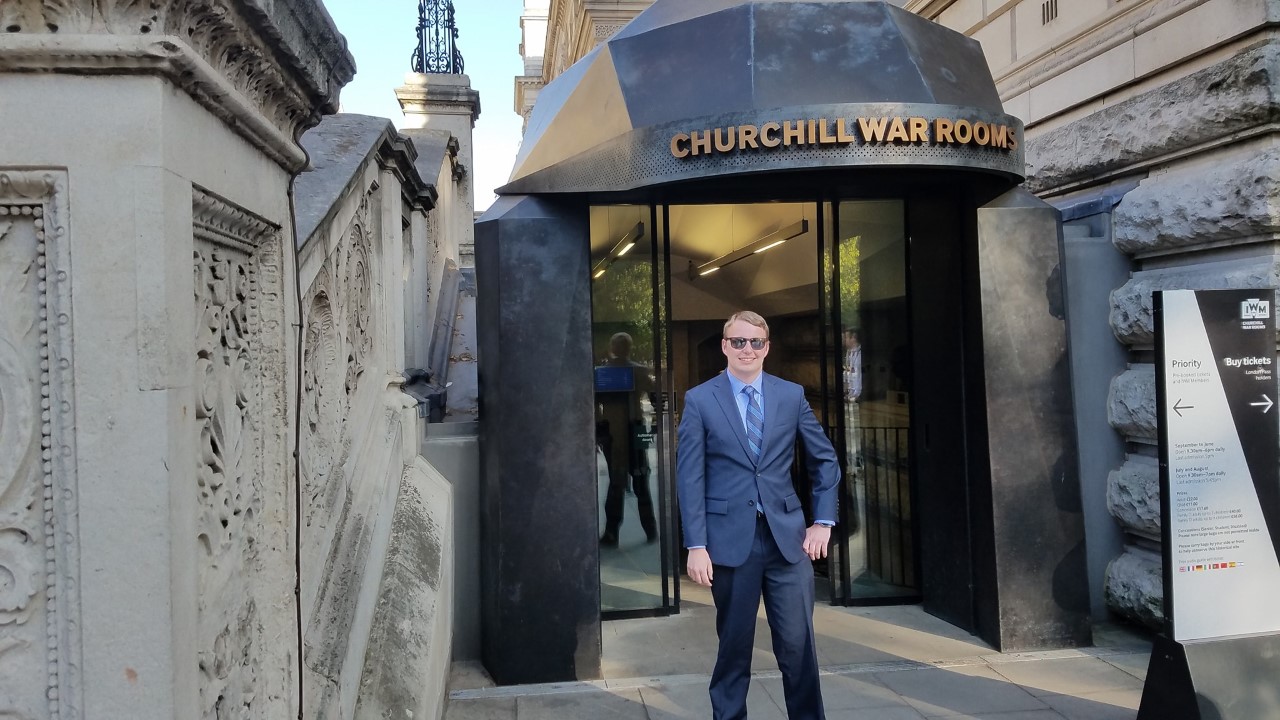 Chandler Casey, ’19 ΦΔΘ, was at an enviable location on Sept. 21. The recent graduate attended a conference at the Churchill War Rooms in London titled “Men in the Moon: The Ideas and Correspondence of H.G. Wells and Sir Winston Churchill.”

Casey was excited to attend not only because of his degree in history from Westminster, but also as a student staffer at America’s National Churchill Museum, or ANCM. Earlier this summer, Chandler logged countless hours studying original Churchill documents on two subjects not typically associated with the legendary statesman— evolution and life on other planets.

During his work at ANCM, Casey extensively studied the original typescript of Churchill’s unpublished essay titled “The River of Life,” which explored the statesman’s theories of evolution.

“He did an exhaustive, line-by-line comparison of the version in the Museum’s collection with an earlier draft now in the Churchill Archives at the University of Cambridge,” explains Timothy Riley, Sandra L. and Monroe E. Trout Director and Chief Curator of the ANCM.

Currently a master’s degree student at the University of Winchester in Winchester, England, Casey’s presence at the Churchill War Rooms followed recent attention the Churchill typescript received after Scientific American contributor Dr. Mario Livio published an analysis of the essay in the publication on Sept. 16.

A 2016 Hancock Symposium presenter, Livio previously analyzed Churchill’s analysis about life on other planets in the  journal Nature. Casey happened to encounter the statesman’s views on alien life while examining another essay, “Are We Alone in the Universe?” while taking an Introduction to Museum Studies class in 2017. That typescript, along with the “River of Life” essay, were written in 1939 and later revised in the 1950s.

“It was fascinating to see how the science fiction writer H.G. Wells and the crafty statesman Churchill interacted through writings,” Casey reflects.

Riley says the subject of “Are We Alone in the Universe?” captivated the H.G. Wells Society of London so much that they organized their 2019 conference around the topic. In addition to Casey, Livio attended the conference via Skype, as did Riley, who at the time was traveling to the Franklin D. Roosevelt Presidential Library in Hyde Park, NY. Churchill Fellow Richard Toye rounded out ANCM representation by serving as a keynote speaker.

Casey, who is studying politics and international relations, says he was excited to speak with the presenters as well as to explore the Churchill War Rooms prior to the event.

“This conference was an amazing opportunity for me as an alum and former museum employee. Attending a conference at our counterpart Churchill museum in the United Kingdom was fantastic,” Casey says.

Riley adds that the conference solidified what he already knew about Westminster’s unique opportunities for students to access historic documents at the ANCM. “It is gratifying to see our students use original documents, treasures really, from the Museum’s collection,” Riley says. “I am delighted and proud that Chandler was able to represent Westminster College and America’s National Churchill Museum at the H.G. Wells Society Conference.”

Founded in 1851, Westminster College is a private liberal arts college in Fulton, MO. Relocated from London to Fulton, the Church of St. Mary the Virgin, Aldermanbury, is a memorial to Winston Churchill’s “Iron Curtain” speech and located above the ANCM. To learn more about Westminster College or the Museum, visit the College’s site here or go to the ANCM site here.