How can a close relationship with a faculty mentor impact your life? Greg Willard ’76 shares his view in the above video.

“Serving in the White House, law degree, legal career, my relationship with President Ford, teaching constitutional law, husband, dad, grandfather – Each one of those milestones in my life has a single, common element,” said Willard during an acceptance speech for a Lifetime Alumni Achievement Award, Alumni Weekend 2014.

“You can draw a straight line from every one of them. A very straight line. Right back to a single person … Bill Parrish.”

Willard recognized Parrish as teacher, mentor, role model, confidante, sounding board, and inspiration. One role, however, meant more than all the others combined, according to Willard. That role is the one most difficult to describe, but best captured by the poet Yeats:

“Think where man’s glory most begins and ends, and say my glory was I had such friends.” 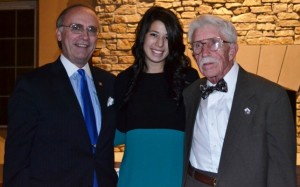 Zalis is the recipient of the Dr. William E. Parrish Academic Scholarship. Willard was the leading donor behind the effort to establish and endow the scholarship.