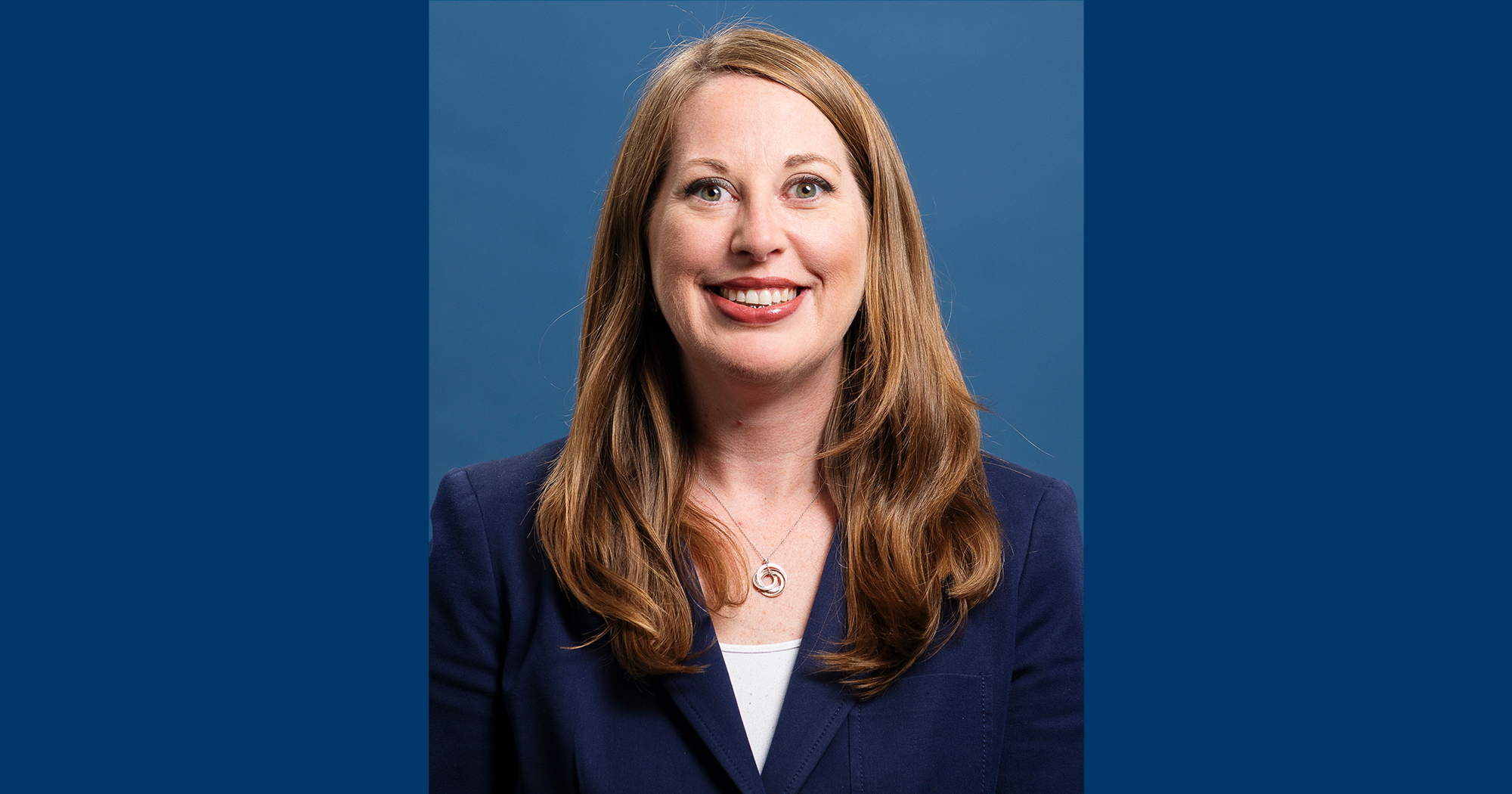 Betsy Sharp Lynch, ’02 ΚΑΘ, was named to the board of directors in December 2019 for the Kansas City Metropolitan Bar Foundation in Kansas City, MO. She also was named board chair for Catholic Charities of Kansas City-St. Joseph in June 2019 for the 2019-2020 and 2020-2021 fiscal years.

I think my parents wanted me to go to Westminster because they knew it was a school that would help reinforce their own values, including the concept of being a servant leader. I think Westminster helped instill self-confidence. There were high expectations from the professors and administration, which I believe is a necessary component to success. Not only did they set high expectations, but they also provided enough support to set me up for success. For the first time in my academic career, I was challenged, and I discovered I really liked it. This is probably why I love my job as a lawyer … because it’s intellectually challenging almost every day.

An attorney who has owned and operated her own law firm since 2011, Lynch works primarily in asset protection. A resident of Kansas City, MO, Lynch grew up in Sikeston, MO, and graduated from the University of Missouri-Kansas City School of Law in 2005 after earning her bachelor’s degree in business administration from Westminster.

A self-described “science nerd,” Lynch attended Westminster with the intention of majoring in physics and then math before finding her purpose in the world of business and finance.

“If there’s one thing you can take away from my experience [at Westminster], it’s that Betsy Lynch frequently takes the road less traveled,” Lynch jokes.

Read further to see how the road from Westminster became Lynch’s path to success in both law and charitable foundations.

Please tell a little bit about what you do on a day-to-day basis.

I’m an attorney who practices in the areas of asset protection. I help small businesses and their owners protect their assets, whether it be by collecting money creditors are owed or by helping debtors protect assets from creditors. I primarily practice in the areas of business planning, succession planning, estate planning, landlord/tenant law and bankruptcy law. I’ve practiced in these areas since graduating from law school. I was a law clerk for an associate circuit judge in Jackson County before entering private practice. I enjoy being my own boss and helping people achieve their goals. Also, I’m licensed to practice law in the state of Missouri, the federal courts of the Eastern and Western Districts of Missouri and the District of Kansas. And I’m a licensed FINRA arbitrator.

Do you enjoy what you do?

I enjoy being my own boss and helping people achieve their goals.

What can you tell us about your recent board appointments?

What do you consider your greatest success?

When I left college and law school, I always thought I had a purpose greater than myself, that there was some big, important thing I was going to do with my life. It usually revolved around thoughts that there was some big case I’d win in court or some unique client I’d represent. Then I had my first son. This probably sounds terribly corny, but I was sitting in the hospital room the day he was born, and everyone had gone home for the night. As I looked down at him I realized that THIS – being his mom – was the big, important thing I was supposed to do with my life. My kids, my husband and my family are my greatest achievement and my greatest success.

Over the years I’ve realized that there are lots of different ways to change the world. Some are as simple as “be a good mom,” or “serve on a nonprofit board” or “raise money for a good cause.” You don’t have to be Sandra Day O’Connor for the world. You have to be the star of your own show and an active participant in your community. If you’re not part of the solution, you’re part of the problem. Sometimes the solutions aren’t as complex as people make them. I believe success is defined only by you and should be less defined by money and more defined by doing what’s right for you at this point in your life. For some people, that means being a stay-at-home mom. For others it means running a law practice or serving on a board. At the end of the day, if you’re happy and making your world a better place, you’ve succeeded.

What made you choose Westminster College?

Westminster College was an old family tradition, albeit I am the first and only woman to attend. My father went to Westminster. My great-grandfather went. Two uncles went. My brother and two cousins went, and they were all Betas. I liked Westminster because it was a small school in a small town, which suited this small-town girl leaving home for the first time. I felt very privileged to continue the Westminster legacy for my family.

How did you go from being a physics major to a math major to a business administration major?

I was so young – I was 17 when I left for college ― and came to Westminster thinking I was going to be a structural engineer, but I really had no idea what I wanted to do. After taking Physics II, I realized I wasn’t quite the science nerd I thought I was, and switched to strictly taking math classes. Then I realized the only thing I could do with a math degree was become a math teacher, so I eventually landed in the world of business and finance, probably because my dad was a banker, and it just made sense to me. It was not the most direct route I could have taken, but I’m probably the only person who graduated from Westminster that year with a whole lot of math and science courses that were deemed “electives.”

I have very fond memories being a little sis at the Beta house, of fraternity parties, rush skits, ball games and the Tap Room. I think the world of the people I met in my sorority, some of whom are dear friends to this day (Swisher, your Sooners are going down in flames!). Greek life was a very positive experience for me. When I became a Theta, it was the first time in my life that I found a group of women who were accepting, who encouraged me to be my true, authentic self. That being said, two of my very best friends from college were actually in different sororities, and we meet for trips to this day. We go on vacations together, see each other at concerts and weddings and our kids play together. The friends I made at Westminster are ones I’ll have for the rest of my life.

Oh my gosh, there are so many! Bob Hoerber is the reason I love business planning and representing small businesses. He was my favorite teacher because he had such a practical, real-world application of business. I loved Dr. Lael, who taught me that the news and history are really subjective. He truly taught me how to think for myself and formulate my own opinions on a topic by gathering lots of information from many sources. Professor Langton will also hold a special place in my heart. He had such a different view of the world than I did. It was fun to have a professor whom you could disagree with but still learn so much from. It’s a concept sorely missing in the world today. He challenged and encouraged me to think for myself, to defend my position. It was great preparation for law school. And then, of course, Ghan Pradhan, my advisor. Being a small-town girl from the Bootheel, I wasn’t exposed to a lot of people from different parts of the world. I don’t think I understood a thing he said for the first six months I was a freshman, but by the end of the year, I’d grown to have tremendous respect for him. He was so smart and had such passion for a subject that was kind of dry (economics). And who in the world could forget Dean Kirby, a/k/a, Mr. Westminster? He knew every student’s name, where they were from and whether they’d missed class last week. I remember feeling so special when I came to campus for the first time, because he knew me. Then I realized he knew EVERYONE and made EVERYONE feel that special. He was such an incredible man to know.

Would you recommend Westminster to prospective college students?

I would absolutely recommend Westminster to anyone heading off to college. Westminster taught me how to read and write WELL. It taught me to take pride in my work and to rise to the occasion. When I left for college, my dad gave me a piece of advice I pass on to others: “College can either be a pretty good time for four years, or it can be a BLAST. For a semester.” No truer words were ever spoken. I also tell those same people that when I die, I don’t need to go to Heaven. I just want to go back to COLLEGE!

Tough call. Either the library (because I was a nerd) or the Beta House (because I loved the real-life version of Animal House).

I’m currently reading First by Evan Thomas, a book about Sandra Day O’Connor, the first woman named a Supreme Court justice. It’s really good! My favorite book is 1984 by George Orwell, but my favorite quick read is probably The Hunger Games series. I highly recommend Hillbilly Elegy to anyone looking for a good read on Americans these days.

“It’s better to keep your mouth shut and appear stupid than to open it and remove all doubt.” I’ve found this advice to be incredibly helpful in court. Sometimes all you have to do is keep quiet and give your opponent enough rope to hang themselves with.

Tin Cup. I love golf. My father insisted I learn how to play and bought me my first set of clubs as a college graduation present. I upgraded to my current set when I graduated from law school. I’m so glad I learned how to play. I think the lawyers and judges enjoy having me in their foursomes, because I remember yet another piece of advice my dad gave me: “No one cares how well you play. They care how FAST you play.”

As a working mother of three who runs her own law practice and sits on two boards, free time is a mythical creature that does not exist unless I leave the country. This is probably why I’ve been to Mexico twice in the past year.