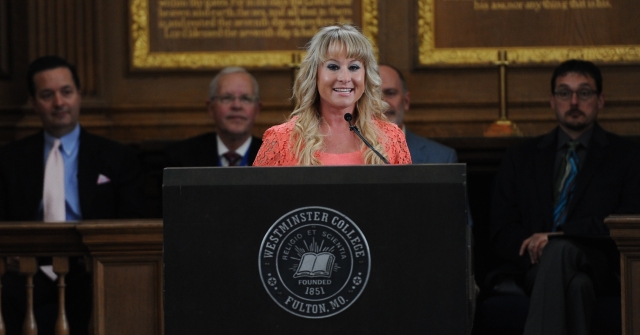 On Saturday, August 16, Westminster will welcome 280 new men and women, the 163rd entering class, into its community. The day will feature the College’s time-honored tradition of the Columns Ceremony, plus the President’s Convocation. This year’s convocation speaker is Sara Hart Weir, ’04.

Sara is vice president of Advocacy & Affiliate Relations for the National Down Syndrome Society (NDSS). In this role, she leads the Washington, D.C. office and oversees the organization’s work on Capitol Hill, its legislative agenda, and leads its advocacy, affiliate, and educational programs.

In 2013, she accepted a three-year appointment to the Maryland Commission for Effective Community Inclusion of Individuals with Intellectual and Developmental Disabilities. Previously, she worked for FaegreBD Consulting, a national advisory and advocacy firm focusing on interdisciplinary services for growth sectors of the U.S. economy.

Weir received the Young Alumni Achievement Award from Westminster in 2014. In the video below, a clip from Weir’s acceptance speech at the Alumni Awards Convocation, Weir shares a memory from her move-in day as a Westminster freshman.