Westminster Alumnus Who Served in Vietnam War Shares His Story 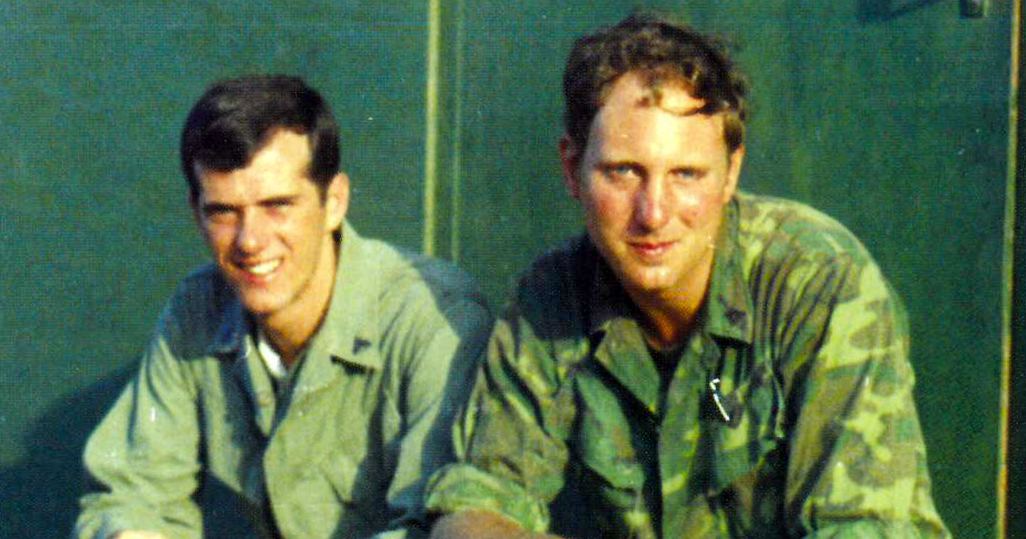 Three years after graduating from Westminster, Mike Lavin, ’67, right, was the commander of 155 men in the 515 Transportation Company in Operation Lam Son 719.

The following alumni profile is the first in a series of stories in honor of Veterans Day on Monday, Nov. 11, 2019. This story will appear with others in a special issue of Westminster Today on that date.

When Mike Lavin, ’67, of Kirkwood, MO, registered for Selective Service in 1963, he thought the Vietnam War would be over long before he graduated from Westminster College. 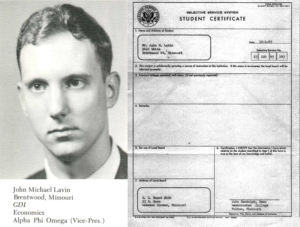 Left, Mike Lavin’s senior photo in the Blue Jay yearbook lists him as a “GDI” and as vice president of Alpha Phi Omega. Right, Lavin’s Selective Service letter was sent to him just after he enrolled at Westminster.

Six months after graduation, however, the economics major found himself in the U.S. Army at Aberdeen Proving Ground in Aberdeen, MD. Then after two uneventful years stationed in Germany — when Westminster students led the first in a series of anti-war protests on campus — Lavin was ordered to Vietnam “as a Christmas present” in December 1969. By December 1970, Lavin’s life had changed forever.

“We were shot at, ambushed and quickly learned to watch each other’s backs,” Lavin says of that winter as commander of the 515 Transportation Company.

The self-described paper pusher and relatively brand-new officer quickly molded 155 soldiers, including “two heroin addicts, many potheads and juicers and a 20-year-old providing services as a pimp,” into a cohesive unit. The company quickly found themselves operating 67 five-ton flatbed trucks along the Ho Chi Minh Trail, driving for two and a half months into violent ambushes while attempting to deliver food and ammunition to troops along the border of Vietnam and Laos.

“In the winter of 1971, late January to mid-April, our group lived in the field, in bomb craters at Khe Sahn, in a bunker constructed of aircraft-aluminum floor decking and three feet of sandbags for a roof, in the ground at Firebase Vandergirft … a small group watched our house at [Camp] Eagle,” Lavin remembers. “We never were together as a group, fractured wherever we drove our trucks, moving ammo and food stuffs during Lam Son 719.”

An account of Lavin’s experience can be found in a recent St. Louis Post-Dispatch article here. He also contributes his story in a book published by the U.S. Army Transportation School, Lam Son 719: The Cargo Must Get Through.

In honor of Veterans Day on Nov. 11, Westminster asked Lavin what he thinks young people today should know about honoring veterans. The interview is found below. Lavin will speak about his experience on campus at 6 p.m. on Nov. 13 in Room 207 of Coulter Science Center.

What were some preconceived notions you had about the military before you served?

I watched too many war movies as a kid, always about getting blown up and high action. In the book The Things They Carried by Tim O’Brien, there is a quote, “In many cases, a true war story can’t be believed. … Often the crazy stuff is true and the normal stuff isn’t, because the normal stuff is necessary to make you believe the truly incredible craziness.” The reality of war for me was more like O’Brien stated than my preconceived notions.

What happened after you returned home from Vietnam?

After returning home, I realized I was depressed and buried my feelings. I got married to my wife, Joyce, raised five children (Patrick, Anne, Kevin, Jon and Marie), now have 11 grandchildren and still work a regular workweek doing light construction for my own business. In the mid-‘90s, I watched two Vietnam War movies, Platoon and Born on the Fourth of July … and sobbed. The time to run had stopped. In time, I would discover the problem.

You talk of self-medication and what you’ve done to manage your feelings about what you experienced. Can you explain that further?

The self-medication would come in the form of talking to high school students on Veterans Day and then to regular classrooms during the school year. At first, it would be more about me, but over the years it became about us … those of us who served but did not show an outward sign of casualty. No loss of limb, but loss of mind.

What else can you tell young people about your time in Vietnam?

Don’t ever make a promise you cannot keep. It will come back to eat you alive. Several years ago, I remembered a promise I made to my men in December 1970, and it was to do your job, and I will get you home. I failed big time.

Can you discuss what you mean and how you have processed what happened to your unit over the years?

I did research to find every man in my company, and I found 50 were already deceased, 10 I could not find and 30 did not respond to my original letter, but in four months, I talked to 70 of the men. We talked on the phone and cried. Many had no emails, broken marriages. Issues of life came up. We were all crying for help. Griffin, my Jeep driver, told me he loved me as I hung up. The responsibility was still mine, to bring my guys home. And so on June 29, 2013, in my hometown of Kirkwood, we had a company formation and conducted a roll call.

What else do you do to help others?

In recent years, I have been involved with the Kairos Prison Ministry. I am a volunteer employee of the state of Illinois and am able to enter the Menard Maximum Correctional Facility in Chester, IL, to talk with men there about serious crimes. Mostly murder. It is a Christian ministry. We talk about God. It seems odd to most, why I do it. But not to me. In my military company, I was no different than many of those incarcerated men. I was given a pistol loaded with shells, handed the weapon to my men but did not pull the trigger. I knew about everything we did. How we felt … I was no less guilty than some of these men in prison for the same actions.

Do you have any last thoughts to share with Westminster about your time in the service?

I went to Westminster College to get an education and to avoid military service. My mother was a Woodsie. It is my time to give back to the College. When I return to campus next week, I will be sitting on the teaching side of the classroom, 52 years after being a student. I will return what I was given: a story about life and the small things that count.

Westminster will be dedicating a memorial to veterans such as Lavin during Alumni Weekend 2020. For more information, email alumni@westminster-mo.edu.