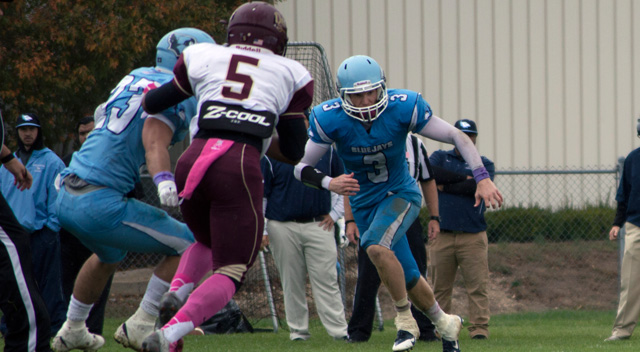 On the football field, Bret Robertson looks like any other a Blue Jay football player in the game. Playing defense as free safety, Bret follows the ball as the play unfolds, ready to provide coverage where needed. His role on the team mirrors Bret’s personal life and conviction, quietly ready to do what is needed.

Off the field, his life is coming full circle in a way he never imagined it would, as he brings his Westminster College education together with his military experience in Iraq. At Westminster, Bret is taking something he is passionate about and learning how to forge that passion into a career, based on leadership, that will improve the lives of others.

A few years ago, however, he never dreamed he would be here. Growing up, Bret never planned on going to college.

Schoolwork has never come easy for him. In middle school, Bret was diagnosed with learning differences; he had trouble with spelling and reading comprehension. In high school in the small town of California, MO (near Jefferson City), he couldn’t see himself going to college, but the military was a path he knew.

“My grandpa, my brother, and my stepdad all served,” he says. “It’s a family thing. I wanted to serve my country.”

When he graduated high school in 2008, the Army was the next step. By September of that year, he had enlisted and was on his way south to Georgia for basic training. A few months later, he was on his way to Iraq, where he would complete a 12-month tour of duty.

Bret says he knew what military service was but didn’t know all that it meant. For a young man from mid-Missouri, the Army represented opportunity.

Now, he says, looking back on his service, he says it’s gratifying to know that he was doing his duty overseas. For Bret, the relationships he formed with his fellow soldiers made a significant impact on him.

“The bond with the people you have over there is something a lot of people don’t ever experience,” he says. “Saying you’ll jump in front of a bullet for 22 other guys – after you get out, the big part of what vets are missing is that bond.”

Bret had what he calls a “reality check” during a day that should have been routine in Iraq, but turned into an experience that brought to life the true weight and potential cost of military service.

In 2009, six months into his 12-month tour in Iraq, Bret was on a routine security check, part of three-truck team ahead of a convoy that would head to a forward operating base (FOB).

“We were on a normal route,” he says about the early morning duty. “There was a roadside bomb on a bridge.”

Bret was in the second truck, each of the three carrying eight to nine soldiers.

“The explosion was in front of us. It missed the first truck, then we got hit,” he says. “We got lucky. With that kind of explosion, someone usually loses their life. Somebody was looking out of us.”

Instead of tearing through the truck, the explosively formed penetrator (EFP) hit the truck’s engine block and sent shrapnel flying. An EFP works with a deadly two-punch – an explosion first melts down a copper disc into a slug-like bullet that then rips through a cannon. EFPs are designed to penetrate armor.

Bret suffered a cut to the face and counts himself as lucky to have walked away.

“A little later and I might not be here,” he says about the timing of the trucks on the bridge that morning. 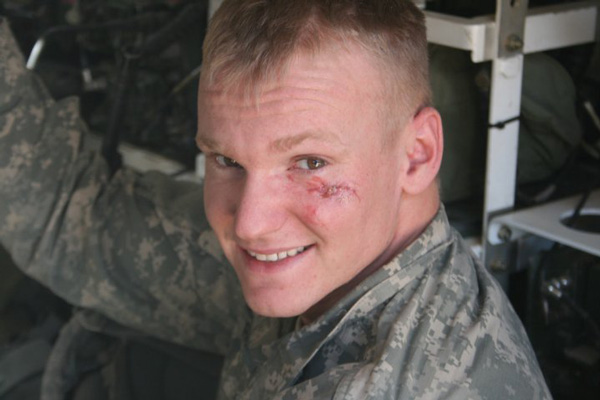 On Finding Support at Westminster

When he returned to civilian life in the United States, Bret followed his brother Braden’s footsteps again – this time heading to Westminster College in 2012.

“I’m the type of person who doesn’t like to sit around. I didn’t know what would happen next, but I knew (at Westminster) they would take care of me.”

Bret knew that his education at Westminster would be funded, thanks to the Yellow Ribbon Program, a VA program.  As a Yellow Ribbon school, Westminster partners with the VA to split the gap 50/50 between the cost of tuition and the maximum Post 9/11 GI benefit.

Upon enrollment, however, he didn’t fully realize the level of service and support that he would receive at Westminster, particularly from the Tomnitz Family Learning Opportunities Center (LOC).

His first semester at Westminster, he says he struggled with the coursework and motivation. With help from the LOC, however, he found his academic footing and ways to work through the challenges of his learning differences.

In the beginning, he met with LOC staff daily. Today, as a college junior, he meets with a staff member twice a week for help with such tasks as note-taking, working on essays, and reading comprehension for exams.

“What I appreciate the most is the advising,” he says. “The encouragement to keep going. They understand (the challenges) are serious, but that there are ways around it. Without the LOC, there is no way I would still be here. “

In addition to academic support from the LOC, physical activity has keep Bret motivated, moving toward his goal of graduation. In high school, he played football and baseball. At Westminster, he competes as a collegiate athlete in football and track.

Bret says the small class sizes are what he appreciates the most about Westminster: “The teachers get to know you. If you need help, you can go to them.”

A self-designed major in organizational leadership, Bret has worked closely with Dr. Bob Hansen, whom Bret says took him under his wing.

Hansen has watched and supported Bret’s progress at Westminster. He describes Bret as a soft-spoken, humble, compassionate and dedicated.

“After the military Bret struggled a bit to find his place in the world but I have watched him gain confidence, find direction, and develop into the kind of leader we want all of our students to become,” Hansen says.

The two have worked together through a variety of courses, from Leadership Theories and Practices (the introductory course to Westminster’s organizational leadership minor or self-designed major in Bret’s case) to Social Entrepreneurship & Innovations Lab.

Not Your Typical Internship

During the spring semester 2015, Bret is completing an internship in Organizational Leadership with the local YMCA (Hansen is serving as his adviser). Through the internship, he is creating a program centered on physical fitness to help local veterans maintain camaraderie and connection and support their transition back to civilian life.

“The timing is right,” says Hansen about Bret’s project. “There’s so much attention to how we help our military vets transition. We need to help them re-integrate and stay connected.”

“We are so excited to have Bret here,” Sara McDaniel, YMCA of Callaway County Chief Operating Officer. “When we usually have an intern, they are thrown into what we offer. Bret’s creating something he is passionate about.”

Close to 30 veterans are members of the YMCA of Callaway County. While many served in the Korean War and have been out of service for a few years, military service is a shared experience across generations.

Bret is finding support both in the community and on campus, including from other military veterans at Westminster, such as his brother Brandan and Grant Gall.

“There’s a hole after you get out of the service,” Grant, retired from the U.S. Air Force, says, reinforcing the need that Bret has identified for veterans to stay connected. “You lose the camaraderie you had with like-minded individuals. When we come together as a group, we know each other’s cases – what they’ve been through.”

“When you talk to somebody who’s been in the weeds, it’s helpful.” 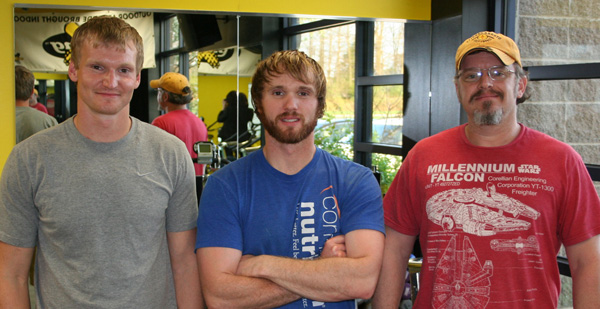 After his expected graduation from Westminster in 2016, Bret plans to attend graduate school, focusing on social work or organizational leadership, and to continue the program he is establishing for veterans.