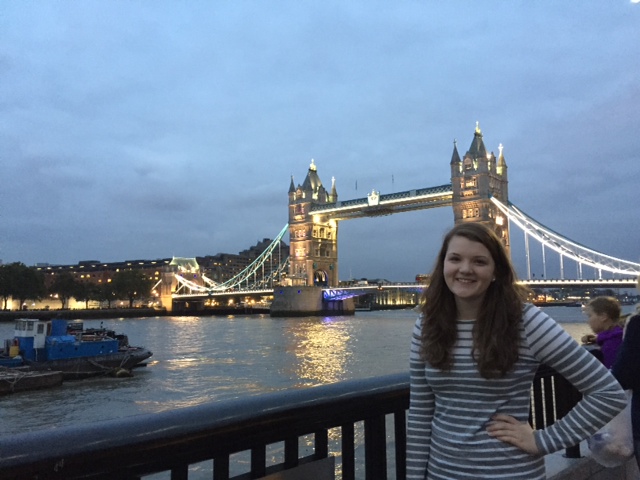 Amelia Ayers ’16 is studying at the London School of Economics during the fall semester, 2014. On Sunday, Nov. 9, she will be in Berlin to watch the festivities for the 25th anniversary of the fall of the Berlin Wall. She will share the experience through a special Skype event with students on Westminster’s campus. Westmo students, join in HAZ 311 on Sunday, Nov. 9 at 3:30 for the Skype event with Amelia.

Below, she shares her view of the upcoming experience.

“From Stettin in the Baltic to Trieste in the Adriatic, an iron curtain has descended across the Continent.” – In 1946 Winston Churchill made this statement in the tiny town of Fulton, Missouri at Westminster College MO during his “Sinews of Peace” speech (https://www.youtube.com/watch?v=jvax5VUvjWQ). Without a doubt this statement came to define the era of the cold war, quite literally when the Berlin Wall was constructed virtually overnight in August 1961.

After the fall of the Berlin wall in 1989, Edwina Sandys, the granddaughter of Churchill and an artist, saw an opportunity to create a monument. In November of 1990, Sandys revealed her sculpture, “Breakthrough”, at the National Churchill Museum at Westminster. The sculpture is 8 sections of the Berlin Wall (the longest contiguous section in the western hemisphere) with human figures cut out of them. The sister pieces, “Breakfree”, are in Hyde Park in New York. President Ronald Reagan dedicated the monument at Westminster in 1990.

This Sunday, November 9th, 2014 is the 25th Anniversary of the Fall of the Berlin Wall. Edwina Sandys will be back at Westminster College and I will be in Berlin.

The Cold War and it’s relation to Westminster influenced me greatly growing up, possibly much more than I ever realized until now. As a child I was interested in why one side of the wall was a stark grey, while the other was covered in color. When I began studying German in 7th grade my interest grew as most of the materials we had were from the late 90s and early 2000s as Germany was still figuring out how to be one again and the social division was evident even to a middle schooler. In high school German we read a book about the tension between the Ossies and the Wessies. I participated in a foreign exchange to Germany with Parkway West High School, which sparked my interest even further.

These experiences inspired me to become a Westminster College Political Science and Transnational Studies double major, but also minor in German, Psychology (International Psych is possibly my favorite topic besides my last/most important minor), and Westminster College Security Studies, which I actually focus most of my work around. I have a keen interest in the further social and psychological divide in Germany as a result of the Iron Curtain. I know Dr. Straughn has a special knowledge in the Sociology of this field, which is precisely why I traveled to Berlin last summer on a course taught by him and Dr. Goodfellow.

While I am studying abroad at The London School of Economics and Political Science – LSE this year, I am still deeply connected to Westminster. As such, I will be (hopefully/barring any technical difficulties) Skyping Westminster from Berlin around 3:30 p.m. (10 Berlin) on Sunday night.

Westminster is connected to history and I’m going to Berlin to celebrate it and skyping back.