“A Checkpoint on the ‘Versus’ Syndrome?”: 2016 Commencement Address by Professor Wole Soyinka 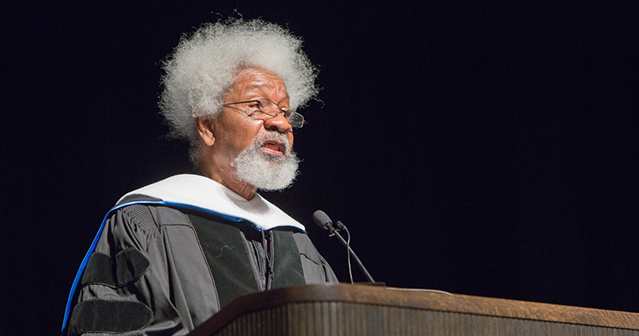 Nobel Prize winner and political activist Wole Soyinka addressed the graduates of Westminster College in Fulton, MO on Saturday, May 7, 2016. Soyinka used President Obama’s 2008 campaign theme to remind graduating seniors of their responsibility to never be complacent in life, their careers, and in guiding the nation’s political future.

A Checkpoint on the ‘Versus’ Syndrome?

By the time you are re-assembled here next year – minus a significant part of the college family – this nation, and the world would have crossed a water-shed that many had sworn would never be encountered in their life-time. Yet, it happened. It is a lesson that those who will emerge from today’s rites of passage, and indeed in any field, and wherever else in the world of human endeavor, should learn, and keep as an embedded part of their very existence. They should consider it a signpost, a secretive promise, and inspiration. In the immediate however, it should also serve as a cautionary guide. We should never permit what has been gained, the advances that have been made, to be frittered away through complacency. The stream that flows from the accumulation of a watershed should not be permitted to dry up, to be polluted, or reversed to dissipate in arid land. It should flow forward, outward, and irrigate the earth that belongs to, and nourishes all humanity, irrespective of gender, race, faith or age. It should bestow its blessings equally on all dwellers on our common earth. Now, what is that watershed that continues – or should continue – to hold the mind captive?  We shall come to it in a moment.

Seven years ago, I made an optimistic declaration regarding that watershed. I stated, quite confidently, that humanity could claim that it had finally arrived, quite plausibly, at a Checkpoint in the Dialectics of Races. I did not allow my optimism to take me so far as to claim that we had reached Terminus, that we had embarked upon the Final Stage of the Dialectic – as proposed by poets and thinkers such as the statesman Leopold Sedar Senghor – as the destination of human races. I assume you have heard of Leopold Sedar Senghor, one of the original architects of a movement known as – Negritude, roughly translated as: the being of blackness.  Mind you, Senghor inserted the caveat that firstly, the historically disadvantaged arm of the dialectic – specifically, the black race – must commence by obtaining its fullest material and affirmation of self-knowledge, as an autonomous reality, before engaging on a universalist journey that would, in turn, spell the demise of the separatist, and thus exclusionist tendency among races – white, European/Caucasian, Melanesian or Semitic. Hence, his formulation – together with Aime Cesaire, the Martiniquan poet and others – of  Negritude.  Nonetheless, within this last decade, the world did witness one of those signal events that implicate a potential end-in-sight of what I often refer to as the domination of the ‘versus’ conditioning in human affairs:  black versus white, christianity versus islam, east versus west, communism versus capitalism etc. etc.

To pronounce an end to the racial vector of that dominant, near instinctive tendency, the versus ‘syndrome’, simply because a member of a once despised, denigrated race, colour and humanity rose to preside over the affairs of the erstwhile gospelers of hateful separatism and racial superiority, would simply raise such questions as: why did world tension and class conflict not vanish with the dismantling of the Berlin Wall?  Or, why did extreme nationalisms not evaporate with the dismantling of apartheid in South Africa. Yes indeed, it is true that the ‘coon’ of yester-year was conferred with unique powers over the land of the Klu Klux Klan.  A nation that produced the iconic image of a small, diffident but defiant black girl being escorted to school by the Marine Corps, to the accompaniment of jeers and spittle from the  merchants of hate and prejudice, would now be compelled submit to decisions that might transform their lives, decisions that would be made by a progeny of the original race of that bewildered, black girl.

Did that thereby terminate the ‘versus’ approach, the ‘we’ versus ‘others’  approach to racial relationships in the United States? Or elsewhere?

The ‘versus’  is a deep-rooted conditioning, to be encountered on global and localized levels,  taking such forms as “those who are not for us are against us”, “my enemy’s enemy is my friend’, and other time-warped ‘wisdoms’, with all kinds of emotive labels. Those who insist that, especially in international interaction, this need not be so, earn for themselves designations such as  ‘race traitors’, ‘effete liberalists’, wooly minded idealists, ‘unpatriotic elitist thinkers’ and other forms of glib demonizations, all of which are designed to brush aside even the objective assessment of such designations. It remains a marvel that somehow, counter-notions such as ‘cultural metissage,’  ‘social hybridity’ or, more accessibly – ‘rainbow coalition’ – not only emerged,  but became persuasive rallying standards in a number of nations. Despite such bookmarks in the politics and ideologies of race however, it seemed wise even at that time to caution, indeed brace ourselves to the possibility that that very ascension of a racial underdog, a product of the slave continent, to dominance in the power stakes of a constituency that was built on the backs of slave labour could trigger, paradoxically, the heightening of that very binary opposition. That possibility was real. We could be overwhelmed – I cautioned – by a latent desire among extremists, manifested in numerous ways, to ensure the failure of such a mandate, and by implication, the failure of his race. Sometimes this phenomenon is referred to as a “backlash”. We could find this manifested also, again paradoxically, in a tendency to apply patronizing standards in assessing his capabilities, policies, strategies or eventual achievements. That last especially, for me, would spell the highest form of race denigration, a reinforcement of the ‘versus’ syndrome couched in the language and gesture of condescension.

It is difficult to eradicate old habits, especially those that simplify the complexity of human interaction. Nothing is more cosseting than to subsume knotty social challenges under ‘we’ versus ‘others’. It is for this reason that I proposed, and do even till today – as I am certain do many others – that even that watershed event  should be read merely as  a Checkpoint, filled with limitless potential, but not as  – Terminus.

That tendency towards polarization, propelled by automatism, is by no means one-sided. Letting go of it is no different from asking a severely handicapped individual to let go of a support or crutch and, in all fairness, where that handicap is the product of collective trauma, of remaining on the receiving end of history, sometimes over centuries, no one should be exceedingly surprised.  Memory plays a more affective role in judgment even for the most objectivised issues, far more than most of us are willing to admit. Here is one personal, light-hearted illustration – time we interject some light relief into what might would otherwise sound too ponderous for a day of celebration.

It took place just after Barack Obama’s installation as president. I was at dinner with a long standing colleague, notorious for his compulsive contumacy. I had said something about the inevitable change, not only in American, but in global psyche that would come from the presence of a black man at the head of  – arguably these days – the most powerful nation in the world. His immediate retort was – ‘what black man? As far as I am concerned, he’s white. He’s a white man.  Tell me, what is black about him? He has a white mother….” and that, I’m afraid, was what we had as appetizer. I chose not to debate him on his own grounds, the palette of Obama’s ancestry being, for me, a mere distraction. This was largely because, right from the party primaries that ended in his national endorsement – as some of you who followed the campaign rhetoric may recall –  race, most markedly did not surface as an issue. I was also quite used to my friend’s outbursts and had stomach only for the evening’s agenda, which was supposed to be dinner.

So, I replied  ‘Oh yes, he’s white if you say so.  But I seem to recollect that the commonest description of him has been – “of black African descent” This means that he’s of black African origin – a first for the United States.  He also has a wife who is indisputably African-American, his children are African Americans, and the United States White House, designated as the residence of the First Family of the Nation,  has thus become, by the fact of occupation, at least a 90% African-American household where, in all likelihood,  soul food might even appear on the menu for the first time in American history. This, I argued, was what the world would see – the real, total world that consists of factory workers, salesmen and women,  technicians, economists, theologians, artistes,  plumbers, bankers, immigrants legal and illegal, taxi-drivers, drug traffickers, truck drivers, Indian and other tribal chiefs,  philosophers and futurologists, high school and college students etc. etc.  Even the blind – I swore –  would see the incumbency transformation.  Now, I demanded, could that possibly fail to affect the psyche of the world or fail to influence, however infinitesimally,  a number of acts, decisions, choices and policies in distant places that would in turn shape the future history of that world?  Did that make a difference? Could this perhaps, I asked, perhaps, be conceded as a small measure of progressive transformation?

Seven years are sufficient for me to attempt to answer my own question but, I shall not. Yet it is by no means posed as a rhetorical question, since the answer is embedded in the choice that Americans are currently poised to make. Do I exaggerate if I propose that, in this contest, one does detect echoes of what I hinted at as the backlash tendency? Is it possible to remark the emergence of a “backlash candidate”? I cite this moment only as a contrasting extraction from that unprecedented event of January 2017, as a souvenir for those departing from these grounds, a memento of their rites of passage which, like all beginnings, also has an end. It is a gift that may be overlooked, which would be a pity, since it is something in which you all labored to bring about.

I was here, in the United States, during that contest. My lectures took me all over the United States where I observed the enthusiasm of youth, the spirit of volunteerism in a cause for change. I saw youth slumbering over desks in sheer exhaustion at the end of the day’s labour, dashing home for a quick refresher and back again an hour or so later to resume work. Individually and collectively, they built that watershed and manned its weir. They brought pride to a nation that had nearly turned into a world pariah. It is your own gift that you take away with you today, that sense of accomplishment together with the testaments of your academic journey. As you are thrown on the job market, always bear in mind your protagonist who will be joining you there be in another seven months. And so, whenever confronted by seemingly insurmountable obstacles in your own onward journey, always recall that you already possess that inner armor of invincibility that reads:   Yes, we can!