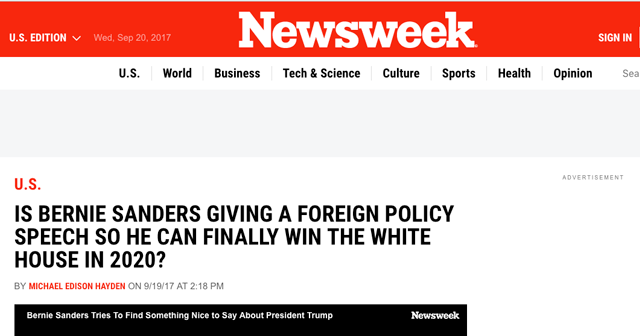 In preview of Sen. Bernie Sanders’ visit to Westminster on Thursday, September 21, Newsweek is asking the question: “Is Bernie Sanders Giving a Foreign Policy Speech So He Can Win the White House in 2020?”

Newsweek‘s post on September 19, 2017 points out Sanders’ previous lack of foreign policy focus in light of his upcoming speech at Westminster: “Not long ago, the idea of Senator Bernie Sanders giving a major foreign policy address at the same spot where Winston Churchill famously warned Americans of the Iron Curtain might have seemed like a lark.”

Sanders is expected to deliver a speech with content not previously shared elsewhere during the 58th annual Green Foundation Lecture at 11 a.m. on September 21 at Westminster:

“But the self-described democratic socialist, who may well be eyeing another run at the presidency in 2020, will nevertheless deliver the prestigious John Findley Green Foundation lecture at Westminster College in Fulton, Missouri, on Thursday, following in the footsteps of not only Churchill, but the likes of Mikhail Gorbachev and Ronald Reagan, giving an indication of just how much his stature as a leader has grown in the wake of not only his campaign but the election of Donald Trump.”