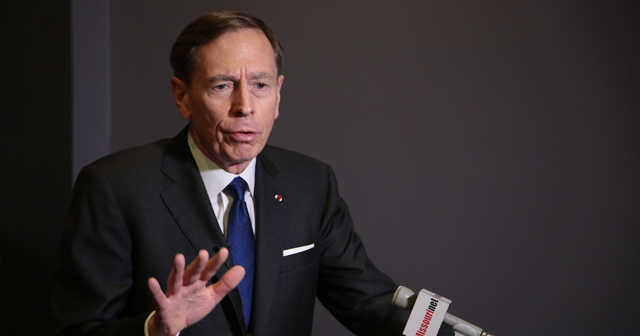 Also Urges Trump Administration to be Vigilant When Dealing with Russians

FULTON, Mo, April 3, 2017 – American threats from North Korea, Russia, ISIS, and the importance of truth-seeking journalists were addressed head-on by Gen. David H. Petraeus and presidential historian and Pulitzer Prize-winning author Jon Meacham, both of whom talked with reporters before their induction over the weekend into the Association of Churchill Fellows at Westminster College.

Petraeus, a former CIA director, who was considered for President Trump’s Secretary of State and National Security Adviser, said he believes “North Korea is probably the most pressing threat because it could confront the President of the United States with a situation where he has to make that most important of decisions … whether or not to use force.”

The retired four-star general also warned that the Trump administration must be vigilant in its dealings moving forward with Russia and its President Vladimir Putin.

“As we engage Russia, there is no question that we should do this with our eyes wide open in a very coldly realistic way with no illusions that Russia shares our values of freedom of expression, democracy, or international human rights,” he said.

As for any relationship between President Trump and Putin, Petraeus quipped that “if there was a love fest, it appears to have ended.” Financial sanctions, he said, should be set against Russia for its interference in the most recent U.S. presidential election.

Petraeus, former commander of the U.S. forces in Afghanistan and NATO International Security Assistance Force, said he believes “Russia wants to see the defeat of Islamic extremists just as we do,” and that it will be essential for the U.S. to get Russia’s assistance to defeat the Islamic State.

“This is not a fight of a decade, but it is one that is going to be generational in duration,” he said referring to the fight to defeat the Islamic State.

Pulitzer Prize-winning author and presidential historian Jon Meacham, who delivered the Enid and R. Crosby Kemper Lecture during Saturday’s annual Churchill Weekend event at Westminster, added that “history is understood as a diagnostic tool, not a prescriptive one,” and that America’s political leaders should study and understand history.

“I would urge all of us in our way to ask of those we put in charge of our affairs, to quote Churchill, to ‘have a sense of history,’” he said, adding that when U.S. political leaders know the past, they are capable of making better decisions that are in the spirit of the American tradition.

Meacham, a former newspaper reporter and former editor-in-chief of Newsweek, said good journalists are seeking the truth when covering politics today, despite what some politicians and the public might believe.

“St. John may have been right: ‘And ye shall know the truth, and the truth will set you free,’” Meacham said. “But what is truth?”

He said citizens today often take a stand on a position, not necessary based on truth. For example, he said, “I had a fascinating conversation last Saturday night, and it was like talking in a foreign language without headphones. We had different versions of the facts.”

Meacham said responsible reporting of the facts – the truth — is more important than ever.

“Bizarrely, we are in a kind of golden age of reporting,” he said. “There’s no better time to be a journalist, but the audience may or may not be impervious to having their minds changed.”

Their induction ceremonies were held in the Church of St. Mary the Virgin, Aldermanbury, also home of the National Churchill Museum. Senior Fellow and Winston Churchill’s granddaughter, Edwina Sandys M.B.E., a noted artist and sculptor, bestowed the honor to the new inductees.

The Association of Churchill Fellows, founded in 1969, is an honorary society of people dedicated to the development and use of the National Churchill Museum at Westminster College, where, in 1946, Sir Winston Churchill was given an honorary degree and delivered his historic “Iron Curtain” speech.