Outstanding Male Senior of the Year Presented to Joseph Munyambanza 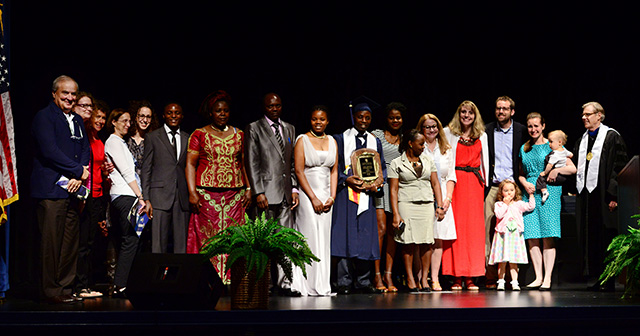 During commencement on Saturday, May 9, 2015, Alumni Council member Jamie Dillon Oestriech ’01 presented two Outstanding Senior Awards on behalf of the Alumni Association. Each year, an award is given to one male and one female from the graduating class.

The 2015 Outstanding Male Senior of the Year is Joseph Munyambanza from Hoima, Democratic Republic of the Congo.

Joseph’s leadership has extended beyond the campus and the local community. He has been on the world stage since a young age and brought his passion for leadership to Westminster College as a MasterCard Foundation Scholar from the African Leadership Academy.

As early as 2005, he and five other students formed the Congo, Burundi, Uganda, Rwanda, and Sudan International Youth Organization. Between 2005 and 2007 he piloted tutoring programs that helped more than 60 students complete primary school.

He has spoken at the Clinton Global Initiative University and the MasterCard national event in Washington, D.C.

He was named to the 2013 “Top 99 Under 33 List” by the Diplomatic Courier for his foreign policy leadership and named one of the 2013 Global Citizen Award winners by the Global Poverty Project in partnership with the United Nations.

He was one of 18 people chosen to serve as advisors on international education to the United States Secretary General and Gordon Brown, the UN Special Envoy on Global Education.

He and two other students were awarded a Project for Peace grant to provide quality online education to local communities in Uganda.

Joseph received his degree in Biochemistry on Saturday. He plans to attend graduate school in 2016. In the meantime, he will continue to work with COBURWAS International Youth Organization to Transform Africa (CIYOTA) to provide education and leadership opportunities to potential future leaders of communities in Africa, especially youth who have been directly affected by violence.

In the photo above, Joseph, standing with his family and President Barney Forsythe, receives his award.