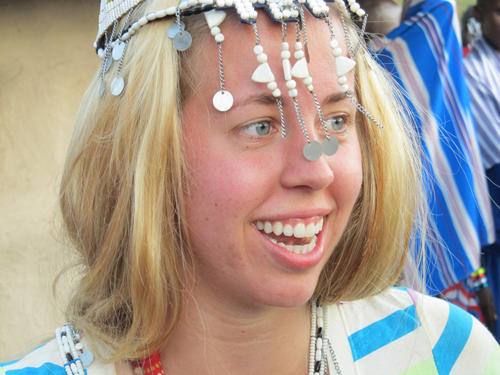 With hard work and a strong academic support system, Jenna Teter Guillen ’14 (above, in Africa) transformed from an underwhelming student into a Rotary Global Scholar.

College is often a time of growth, but growth might be an understatement for Jenna Teter Guillen’s years at Westminster. The Fresno, California, native came to Fulton after a year abroad, followed by two years in junior college. She was unsure of her next step and lacked confidence in her academic abilities. But with her interest in the newly added transnational studies major and a cousin already in Fulton, she decided to give Westminster another look.

“When I first visited Westminster College, what stood out to me were the leadership opportunities and, specifically, the way professors challenged their students to step out of their comfort zones and step up to the plate,” Guillen ’14 says of her early days on campus. “But professors did so through guidance and encouragement. I like to think of it as ‘training.’”

That “training” has taken Guillen from the halls of Westminster all the way to the Australian National University in Canberra, where she’s currently pursuing a Master of International Law degree as the recipient of the prestigious Rotary Global Grant, a $30,0000 scholarship from District 6080 or Rotary International. Westminster student Gregory Rockson ’11 was selected as a Rotary Ambassadorial Scholar for the 2011-12 academic year and studied at the University of Copenhagen in Denmark.

Guillen’s drive and work ethic are palpable, though she’s quick to acknowledge that she wasn’t always a stellar student. In fact, feeling underprepared for her classes and coursework when she arrived at Westminster, she considered returning home to California after a rocky first semester.

“About three to four weeks after she started here, she came into my office in tears saying, ‘I can’t do this,’” says Kurt Jefferson, assistant dean of global initiatives and director of the Churchill Institute for Global Engagement. “I talked her into staying and redoubling her efforts (she was working for me in the Institute at the time). It was a watershed experience for her. I’ve seen very few students kick it in gear like Jenna did.”

As Guillen continued pushing herself, she found a growing support system among the faculty. Along with Jefferson, Westminster professors Bob Hansen, Ray Brown, Mark Boulton, Sam Goodfellow, Cinnamon Brown, and Jeremy Straughn helped guide her as she pursued a degree in transnational studies and a minor in history.

“The small classroom setting, where I felt comfortable asking questions and speaking in public, and the leadership opportunities where I didn’t feel pressure to compete against thousands of students (mainly because most of them were my friends) helped me understand my weaknesses and strengths and take the time to improve and grow in those areas,” Guillen says. “I wasn’t afraid to challenge myself and learn to grow at Westminster, all because of the encouraging environment, opportunities and professors.”

In the summer of 2012, Guillen went to East Africa with the College’s Humanity for Children team and stayed an extra month in Rwanda to do an internship with the district mayor. It was an experience that shaped her — one she points to as the most significant of her undergraduate years — and planted the vision for the type of leader she wants to be and the impact she hopes to make. 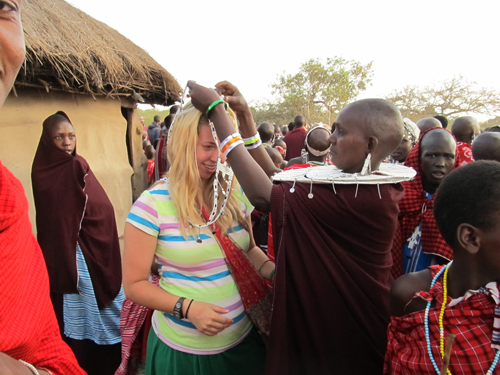 During her 2012 trip to Africa, Jenna Teter Guillen receives traditional Maasai jewelry. The trip was a significant – life-shaping – experience for Teter.

“At Westminster, I took chances like I never had before,” she says. “I never thought I could accomplish a task like writing a thesis, but I did and don’t regret the challenge. I never thought I would go to Africa for one summer and intern with the local government. I never thought I’d receive a scholarship to complete my master’s overseas. But all those opportunities and chances lead me to [where I am now]. Westminster encouraged me to take chances.”

“This is a Westminster success story if there ever was one, which there have been many,” Jefferson says. “What’s most important is that she is a good person of strong character, faith and purpose, and I respect her much for that.”

Following a successful first semester at the Australian National University and an internship with the United Nations High Commissioner for Refugees, Guillen is excited for the next term of coursework, beginning in mid-February.

“Studying in Australia is very exciting, mainly because I get to study an area I love but also travel in the meantime,” she says. “But [it’s also exciting] being in a different part of the world where opinions and ideas are different and so are the opportunities, which are all shaping my future in a way I can’t yet see or grasp.”

In five years, Guillen sees herself working for the U.S. State Department or another branch of the U.S. government.

“At least this is what I am hoping,” she says. “I would love to be a staff member of someone in Washington, D.C. as well, but let’s just say my mind is open to all opportunities in the U.S. or abroad.”