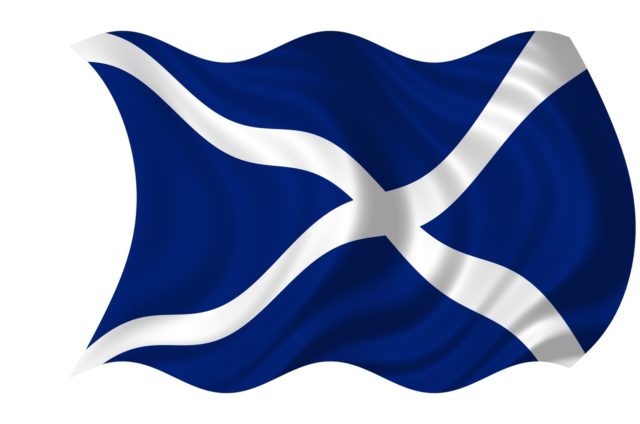 The banner of St. Andrew’s cross

Loyal Westminster alums are known as “true blue” because their strong loyalty to Westminster parallels our school’s predominant college color, a deep and brilliant blue. In fact, those who have made financial gifts to the school every year from the time of their graduation are members of the True Blue Society.

So it will be shocking to many “true blue” alums to find that Westminster’s original school colors were yellow and white. Fortunately, the history of how this change came to be is accounted in the 1903 yearbook.

Evidently, a discussion of changing school colors had occurred several years before this because the question is described as “agitated several years ago.” The complaints were that yellow and white demonstrated “a lack of contrast, lack of strength, lack of significance, and lack of appropriateness.”

Whatever the reason for a change gaining momentum that year, in the winter of 1903, the Westminster student body voted unanimously for the adoption of true blue as Westminster’s color. Their decision met with the blessing of the faculty and the Board of Trustees. That true blue color is described as “between green and violet in the spectrum” and containing no “suggestion of emerald green nor royal purple.”

The reasons for the student body selecting true blue for Westminster were both symbolic and historically significant.

In the words of the account: “true blue has always been the symbol of genuine, upright, downright, constant, unwavering, staunch, sterling, unflinching” and Westminster’s “past history has given evidence that she possesses those sterling qualities typified by the blue.”

Equally important, the color “true blue” was deeply rooted in the history of the Presbyterian Church, which founded Westminster. In 17th-century Scotland, the Covenanters, a group who had sworn to maintain the Presbyterian doctrine as the sole form of religion in their country, were embroiled in a bloody civil war with the Royalists, Scottish Roman Catholics and Episcopalians who were opposed to the Covenanters imposing their religion on the country. The Covenanters marched into battle under the blue banner of St. Andrew’s cross in contrast to the royal and bloody red colors of the Royalists.

Later on, in 1653, when Oliver Cromwell was Lord Protector of the Commonwealth of England, Scotland and Ireland, Parliament wore coarse blue worsted stockings instead of the customary court black silk.

In changing Westminster College’s colors to “true blue” the student body was told: “The old blue will ever remind us of the Scotchmen of old who signed the compact with their blood, and who, rather than be deprived of their liberty to worship God according to the dictates of their consciences, poured out their life blood on Scotland’s soil, and enriched not only the history of their native land, but of the whole world.”

This poem appeared in the yearbook:

“It’s guid to be upright and wise,

It’s guid to be honest and true;

It’s guid to support Westminster’s cause,

And abide by the old true blue.”

Students were admonished while wearing the blue, “we cannot do a deed that shames those heroes of our holiest days”—not a bad sentiment for Westminster students to remember today. Much better than being associated with yellow.