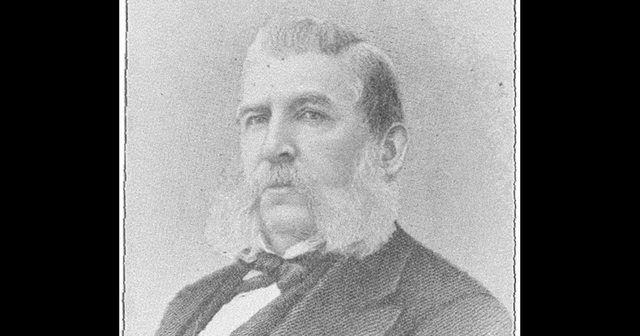 Finding a first President for Westminster College was no easy task. In fact, for the first few years (1851-1855), the faculty took turns being in charge in a weekly rotation.

The first choice of the Board of Trustees was Reverend Nathan L. Rice, D.D., who had distinguished himself with his address at the College’s dedication. However, he turned them down. He had only a short time before reached a pinnacle in his career by leading the Second Presbyterian Church of St. Louis, and leaving that position to run a rural college in its startup years was not an appealing choice to him.

Next, at the February 1854 meeting, the Trustees voted to hire Reverend W.L. Breckinridge, who was the well-established pastor of the First Presbyterian Church of Louisville, Kentucky. Upon visiting Westminster, he was willing to come but was unable to get released from the Louisville Presbytery, even after a delegation from Westminster traveled to Kentucky to plead his case. As one clergyman described it: “the college had a good argument ‘but the white handkerchiefs (alluding to the ladies present and weeping in the church) beat them.'” Another attempt by the Synod of Missouri to approach the Louisville Presbytery in the fall also failed.

Finally, at the 1855 commencement, the Board decided to elevate Reverend Samuel Spahr Laws, L.L.D., from professor of natural science to president. Dr. Laws was a graduate of Miami University, where he had joined Beta Theta Pi, which had been founded only nine years before he graduated.

A brilliant man, Dr. Laws ultimately held diplomas in science, law (Columbia University), medicine (Bellevue Hospital Medical College), and theology. His contemporary and former student Reverend J.A. Quarles, D.D., said of him: “President Laws was, without doubt, one of the really great men whom our country has produced. His was one of those mighty minds that impress you as having an unlimited reserve of force which it never needs to call into action.”

Dr. Laws was also known to have a dominating personality, and he often clashed with other Westminster officials. He had a particularly bitter relationship with Reverend W.W. Robertson, who founded the College. Both men graduated from Miami, were Presbyterian ministers and were known to be as hardheaded and opinionated as they were devout and devoted to the college and the church. Right after Dr. Laws became president, he asked Dr. Robertson for special pews for the Westminster students at the Fulton church service. Dr. Robertson informed him that Westminster students didn’t look any different from the rest of the congregation and could take seats wherever they could find them just like everyone else. As a result, Dr. Laws preached weekly sermons in the college chapel and Westminster students received their spiritual enlightenment there. The students had their choice of attending Dr. Laws’ afternoon service or the evening one.

To his credit, Dr. Laws accomplished a great deal for the College. He put in place the educational structure, policies, and ideals which still are its foundation today. He raised an endowment that equaled more established East Coast schools and raised the enrollment level to a fourth-place ranking among all Presbyterian Church colleges. For a great deal of his presidency, Dr. Laws was not on campus because of the travel demands of raising money for a neophyte college, and in his stead, Greek Professor F. T. Kemper served as acting president.

The seeds of discord which led to Dr. Laws resignation as President began at the June 1861 commencement exercises. When Dr. Laws arose to confer degrees, he conferred two of the nine in absentia to graduates who had left school early to join the Callaway Guard when the Civil War erupted. He bestowed the degrees on the two by saying in Latin: “These two diplomas are conferred on Lt. Joseph Scott Laurie and Captain Daniel H. McIntire absent in the field crowded with tents.” Hearing such words that called attention to a war-torn nation in a foreign tongue did not sit well with the very divided Union and Confederate crowd. Eventually, disloyalty charges against President Laws would cause a withdrawal of support from the College by Union sympathizers that would hurt the College’s wellbeing for a generation.

However, it was the absence of four others from commencement who would have graduated if they had not been previously dismissed from school by Dr. Laws that prompted the parting of the ways between him and Westminster. Twenty students had been caught drinking and were ultimately punished, but six students, including four graduating seniors, who were believed to have information on the incident, refused to answer questions. These six were dismissed from school for breaking the college rule of truthfully providing information about student misconduct. One of the dismissed students was the son of a prominent St. Louis minister and trustee who asked that the dismissals be suspended until an appeal to the Board could be decided.

This led to a very public debate as teachers, the dismissed students, and Dr. Laws himself wrote a series of letters that were published in the local newspaper, the Missouri Telegraph, defending their positions, and the running controversy prompted everyone from faculty to townspeople to take sides.

Meanwhile, gaining a quorum at a Board of Trustees meeting seemed like an impossibility. Many were afraid to travel in the midst of civil war strife to the Union-occupied city of Fulton, and the regular June meeting—as well as special session meetings called in July and August—never materialized. Enough attended the August meeting to approve a suspension of the opening of the fall term, and while Dr. Laws recommended the College close completely at the November meeting, the Board decided the College would remain open, the only College outside of St. Louis to do so during the war.

The other controversial issue still unresolved by the Board was the dismissal of the six students who had refused to reveal what they knew about the drinking incident. The Board expressed its disapproval of the action which Dr. Laws had taken by a 10-4 vote. They abolished the rule which required students to provide such information. And then they ordered the two dismissed juniors be reinstated and the four graduating seniors be given their final examinations to receive diplomas.

Without getting up from his seat and using his hat for a writing desk, Dr. Laws wrote his resignation and submitted it to be effective immediately. During his presidency, Dr. Laws had been in charge of all student discipline because he felt good discipline was key to a well run educational institution. So to have the Trustees fail to support him was unthinkable to him. The Board accepted his resignation with a resolution stating: “cheerful testimony to his many sacrifices, his untiring labors and his ability in presiding over our College in the dark and trying days of its infancy.”

The twists and turns of fate in Dr. Law’s life were far from over.  He moved to St. Louis and a year later was arrested and tried for treason for his Southern sympathies. Once paroled, he was banished from the United States as punishment and spent the rest of the war teaching in Paris.

At the end of the war, he returned to America to accept employment as Vice-President of the New York Gold Exchange. To put an end to messenger boys having to run into the Exchange and back out to the clients repeatedly to give them the latest price of gold, he invented the Laws Gold Indicator, a predecessor of the modern ticker tape machine. Once one was installed at the Exchange, he began installing them in brokerage houses for a monthly fee. In 1869 he hired a penniless would-be inventor to be his mechanical supervisor by the name of Thomas Edison.

Dr. Laws would return to higher education to serve as President of the University of Missouri (1876-1889) and today the residential building on campus, Laws Hall, bears his name.  Following this, he spent a period of time in Kansas City writing books and managing investments before assuming a teaching position at the Presbyterian Theological Seminary in South Carolina. He retired in 1898 and spent the rest of his life living in Richmond, Virginia; Washington, D.C.; and Asheville, North Carolina, where he died in 1921.

The work of Dr. Laws lives on today in the academic model he first structured for Westminster. During his years in the presidency, Westminster prospered under his strong leadership and wise direction. When he left, the Civil War had just exploded and with it, the healthy and thriving atmosphere at all educational institutions. The close of Dr. Laws presidency was the end of an era.