Westeryears: The Scandal That Led To Swope Chapel 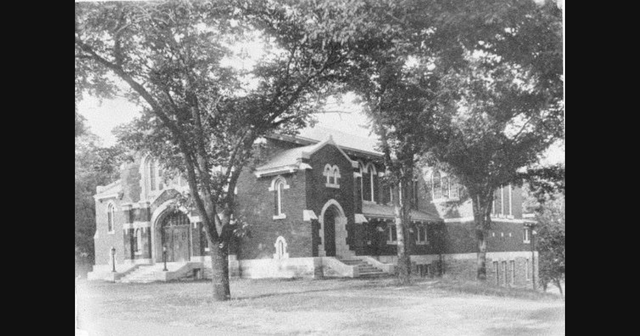 Swope Chapel is a cherished source of past memories for Westminster College.

Margaret “Maggie” Christman Swope had been convinced by Rev. John J. Rice, Jr. ’06, the grandson of Nathan L. Rice, first president of Westminster who gave the cornerstone dedication address for the founding of the College, that the best memorial she could leave for her son, William Chrisman Swope ’00, was to build a chapel on the Westminster campus. William had died in 1909.

Once the chapel had been designed according to her specifications, Maggie gave $50,000 to build the William Chrisman Swope Memorial Chapel and $5,000 for a pipe organ in memory of her brother James, who was also an alumnus. This was the largest gift to come to the College so far in its history and only the second time an individual had provided funds to construct a building.

Construction began in October 1917, and the building was completed a year later. However, the dedication of the chapel was postponed until the 1919 commencement exercises so Maggie herself could attend. 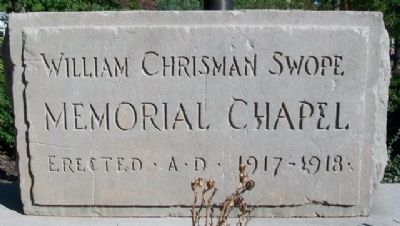 For decades, Swope Chapel was the heart of campus life at Westminster. The twice-weekly religious instruction was held there, as well as all church services. The school library was housed in the basement and became the student center in 1953. Commencement exercises, talent shows, debates, and a wide variety of campus events were held there. Elmer Ellsworth Reed, the only Westminster President to die in office, lay in state in Swope Chapel. The Diamond Jubilee celebration of 1928 was held in Swope Chapel. The first Green Foundation Lecture was held in 1937 in Swope Chapel. The chapel was used as an overflow space for Churchill’s famous “Iron Curtain” speech in 1946.

However, the scandalous circumstances which prompted the building of Swope Chapel made for one of the most interesting stories in Missouri history.

Col. Thomas Swope, who had amassed a fortune of $3.5 million in real estate ($70 million in current financial terms), lived for many years in hotels because he was a bachelor. Later in life, he moved into the Independence, Missouri, mansion of his widowed sister-in-law Maggie Swope, who lived there with five of her seven children and a cousin, Col. Moss Hunton. Maggie’s other two children, Tom and Frances, were both married and lived nearby.

In September 1909, Col. Swope suffered a fall and was confined to the mansion. During that time, he came under the care of Dr. Bennett Clark Hyde, who had married the Colonel’s niece, Frances. Dr. Hyde was the President-Elect of the Jackson County Medical Society in 1909, which was surprising considering his history. He had once been accused of grave robbery to find cadavers for a local medical school and had been dismissed from the position of police surgeon (medical examiner) for improper behavior.

Although Col. Swope was personally an eccentric and demanding curmudgeon, surprisingly enough, he was a noted philanthropist and had been responsible for donating 1,344 acres to Kansas City in 1896 which would become Swope Park. He also had in his will designated most of his fortune to be divided up among his nieces and nephews, but $1.5 million in cash was to be divided up among them equally.  During his convalescence, he told Dr. Hyde that he intended to change his will, giving the $1.5 million to a group of charities, which would certainly diminish the amount the nieces and nephews, including Dr. Hyde’s wife, would receive.

Yet, before the executor of Col. Swope’s will, Col. Hunton, could make the change in the will, he suffered what was termed “a stroke of apoplexy” at dinner and died later that night on October 3, 1910.  Col. Swope’s nurse, Pearl Kellar, would later report that after Col. Hunton’s death, Dr. Hyde tried to convince her to persuade Col. Swope to make him the new executor of the will since he was the eldest male in the family. She refused.

Two days after Col. Hunton’s death, Dr. Hyde asked Nurse Kellar to give Col. Swope a digestive medicine, and fifteen minutes after the dosage, Col. Swope went into convulsions, then a coma, and later that night died of what was reported as “apoplexy.”

On December 2, Maggie Swope became ill with typhoid fever. The next day her son William Chrisman became ill, followed by five other members of the family and several servants, with typhoid. They all had two things in common: they drank water from the same cistern and were all heirs to the Col. Swope fortune.

Dr. Hyde and his wife Frances did not become ill because, as Frances later reported, her husband had advised her not to drink from the cistern.

On December 3, William Chrisman died in violent convulsions after having taken a pill from Dr. Hyde.

Deeply suspicious about the strange deaths in the family, Maggie Swope contacted the police, and the resulting circumstantial evidence pointed heavily to foul play by one individual—Dr. Hyde.

The investigation revealed Dr. Hyde had purchased cyanide on two occasions, obtained culture tubes containing typhoid-causing bacteria and diptheria germs before the mysterious deaths and illnesses, and a host of other strange coincidences.

In the spring of 1910, Dr. Hyde was tried for the murder of Col. Swope, and the prosecution’s costs were paid by Maggie Swope herself. On May 10, Dr. Hyde was convicted of murder and received a life sentence.

However, on appeal, the Missouri Supreme Court reversed the conviction on the grounds that the deaths of William Chrisman Swope and Moss Hunton and the typhoid outbreak should not have been admissible because it allowed a jury to infer “from the commission of one crime that the defendant is guilty of another.”

At Dr. Hyde’s second trial, a juror left the trial one afternoon and disappeared, causing a mistrial. At a third trial, the judge suffered a mental breakdown and was put in an institution. The state tried to convene a fourth trail but finally, charges were dropped.

Although Dr. Hyde went free, the legal defense cost him nearly $1 million and ruined his reputation, and his wife Frances divorced him. He died in 1934 without ever confessing to any wrongdoing.

The rest of the Swope family suffered misfortune as well. Maggie’s son Tom lost the family dairy farm and most of his inheritance during the Great Depression and ironically ended up as a night watchman at Swope Park. Daughter Lucy eloped with a traveling salesman whom she later divorced.  Daughter Sarah died at the age of 20, and daughters Margaret and Stella moved to California and New York.

Maggie Swope ended up selling the Swope mansion to the Church of Jesus Christ of Latter-Day Saints as a school. The mansion was torn down in 1960 to make a 19-acre overnight camping and recreational facility for the church.

Maggie Swope lived to the ripe old age of 87 and died in 1942 in Independence.

Swope Chapel, built in memory of Maggie’s son, did not survive either. Flaws in the construction of the Chapel from the beginning eventually brought about its demise in 1967.

A musical performance in Swope Chapel