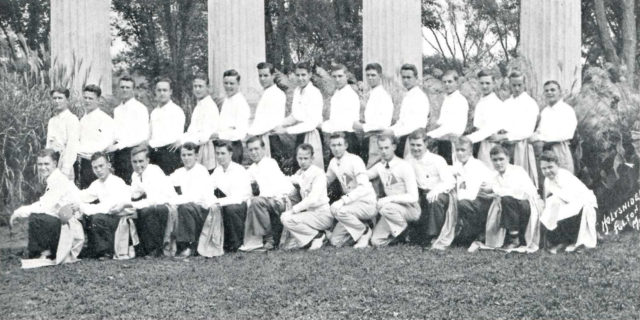 One of the great tales of Westminster College yore is the origination of a campus group called “The Razzberries.”

Flashback with Westeryears to 1921. On one cold, gloomy day, the Westminster Blue Jays are locked in battle on the football field against Central College.  In spite of the Blue Jays’ best efforts, halftime arrives with a score of 0-0.  Then from one end of the field comes a group of young men in white trousers and black sports coats with blue and white caps and a deep blue sashes at the waist.  Leading them is a small boy carrying a box emblazoned with the word “VICTORY” in large letters.  Once in full view, the blue-sashed group begins chasing the boy, who in the process of running across the field, drops the box. When the box bursts open, a frightened and enraged rooster pops out and begins running around, to the amusement of the spectators, until this group of young men catches it.

This was just the first in a series of stunts which this group called “The Razzberries” would stage at football games to distract their opponents and energize the crowd. Organized that day by James Brown, Class of 1924 from Perry, MO, The Razzberries’ action fired the Blue Jay team up for a 13-0 victory over Central, and a new pep organization for Westminster was born. Their purpose as one yearbook describes it was “to appear peppy to the point of lunacy.”

The Razzberries took their name from the initiation rite, or literal form of “razzing,” required of its new members.  During Pledge Week for The Razzberries, candidates were required to carry a can of red raspberries around with them at all times and have a date while carrying the can.  Its juice was referred to as “goober oil.”  One year an initiate not only had to endure carrying around a can of raspberries, but he also carried a pet blacksnake his tormentors wrapped around him.

The role of The Razzberries on campus in generating student pep came into play at football games, at pep meetings, while organizing the freshmen for the Homecoming Day parade, at torchlight parades, and at the yearly initiation of its members.

At first, membership in The Raspberries was restricted to those who lived in a dormitory.  But fraternity men and those living out of town expressed their dissatisfaction at being excluded, and the rules were changed.  The membership number was enlarged to 25 and included members of the four fraternities on campus as well as those living in dormitories and out of town.  In 1923, the Westminster cheerleaders were made honorary members of The Razzberries in addition to its 25 regular members.  It was said: “To be a member of The Razzberries is an honor and a mark of worth, for members are chosen for personal activity and worth, not for political activity or affiliation.”

Gradually, the required dress of white trousers, black sports coat, and blue and white cap went by the wayside, and Razzberries could be identified by their traditional blue sash. As one witty yearbook writer framed the club’s group photo with its sea of blue sashes: “The fellows above look like toreadores and for that matter there is plenty of bull associated with them.”

Supposedly in 1930, senior Charlie Wilson from Fulton, MO, composed an official song for The Razzberries at initiation, but it was a club secret kept from the rest of the world and only sung once a year at the stroke of midnight.

The 1930 Blue Jay yearbook outlines five advantages to being a member of the Razzberries:

Any mention of The Razzberries disappears after the 1934 yearbook, so the assumption is their role was absorbed completely by the Blue Jay cheerleaders, but for more than a decade, their flamboyant presence was a colorful addition to the Westminster athletic scene.