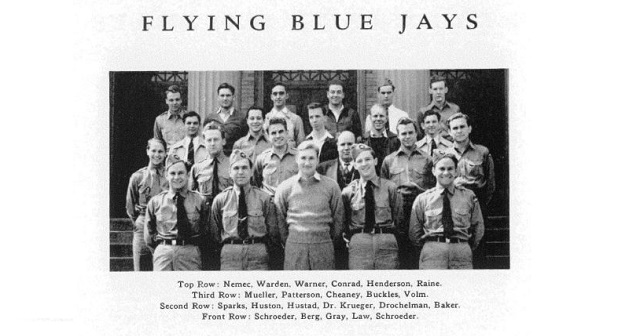 An airplane kept in the basement of the gymnasium? Yes, that is where the plane was located for The Flying Blue Jays, a Westminster organization that offered student “aeronautical aspirants” the opportunity to learn to fly at a greatly reduced expense.

The first members in December 1940 were students in the Civil Pilot Training Program. By second semester over 30 members had joined. All the members received their private pilot license.

The first year of the club was not without its excitement. One student, Douglas Cheaney, ’41, from Arcadia, MO who was a Highlander, was forced along with his instructor to land when their engine went dead, and in making their emergency landing, they struck a fence post. Neither man was hurt, and the plane was only slightly damaged.

Another incident occurred that year when Gordon Gray, ’41, who was President of the club and another member of the Highlanders, turned over when he hit a gust of wind in Jefferson City on a cross-country solo flight. He was also uninjured, but the plane suffered serious damage.

The flying field constructed in conjunction with the National Defense Program was located approximately three miles west of the Fulton city limits.

Ground school work was conducted by Dr. A.C. Krueger in the Department of Physics and instruction in flying was administered by Mr. E.A. “Spike” Saladin.

Eventually, the Flying Blue Jays owned two planes, but membership dwindled. The lastest year the organization can be found in the Blue Jay yearbooks is 1963, at which time the club had only five members.