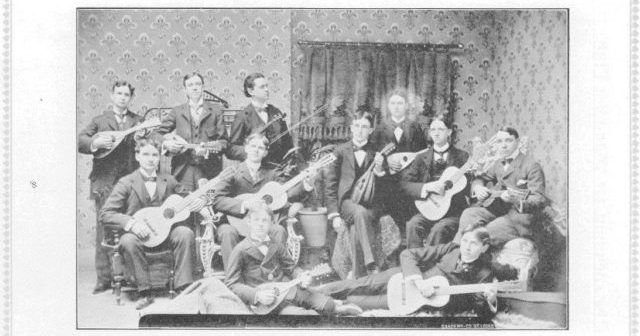 After 45 years, instrumental music finally came to Westminster in the fall of 1896. While instrumental talent existed on campus, no one had ever thought about creating a formal organization until that semester, when several students realized nothing existed and sat down to start a club.

Their brainchild was the Mandolin Club. That may sound odd to today’s music lovers, but the mandolin was the cultural rage of the 1890’s and early 20th century, which is known today as the “Golden Age of the Mandolin.” A wave of Italian mandolin players toured the United States in the 1880’s, playing concerts and teaching the mandolin. The popularity of this lute-like, stringed instrument grew, and thousands learned to play the mandolin. Mandolin orchestras sprung up worldwide, and newer and better quality mandolins were produced. Playing the mandolin became considered a necessary talent for well-bred young men and women of society.

Beginning with six members, the Westminster Mandolin Club soon grew to eleven. They were said to have a large repertoire of songs which steadily increased, and they began to play at fraternity parties and other social functions. Previously, the College had been compelled to find or hire outside sources of music for events, entertainments, and contests.

Of thee we sing;

Send forth a joyous tide,

J. Fred Bolton was the Director and Leader of the group, with Clive D. Scott, who played first violin, as secretary-treasurer. Scott talks of the good times members had making music together and says, “How many pleasant hours have we spent dispelling dull care from our brains overtaxed with wearisome mathematics or stubborn Greek, with the soothing magic of music.”

Scott also talks about the musicians sneaking away on nice spring and summer nights to woo the nearby “Seminoles” and “Orphans” with “sleep-destroying harmonies.” The Seminoles were the women of nearby Synodical College and the Orphans were from the Female Orphan College, originally founded in Camden Point, Missouri, in 1870 to respond to the needs of girls orphaned during the Civil War. Over time, the Female Orphan College would become a teaching college for women and then evolve into William Woods, whose young women were nicknamed “Willies” by the men of Westminster.

Obviously the Mandolin Club’s nocturnal visits to the nearby women’s institutions were successful, because Scott happily reports, “And then there was the harvest of notes and tokens to be gathered in afterward and if perchance points of etiquette were forgotten for the nonce in the excitement, who shall say that we were altogether inexcusable?”

Later photos and references of the Westminster Mandolin Club are few and far between. A group photo with the Philologic Literary Society in the 1907 yearbook would appear to indicate the two cultural organizations joined forces. The last mention of the Mandolin Club is in the 1908 yearbook, and the first Westminster orchestra begins emerging in the 1910 yearbook, so the supposition is the Mandolin Club gradually disappeared, replaced by its orchestral successor.

This would be in keeping with what was happening in the outside world. As phonograph records, outdoor sports, bicycle riding, and automobiles became more popular, the thought of spending recreational time strumming the mandolin became less appealing to young people. By the end of World War I and the coming of the Jazz Age, America’s obsession with jazz had overtaken all other forms of popular music.

However, in the hustle and bustle of today’s society, there are times when those quiet days of Westminster men strumming their mandolins for relaxation, entertainment, or attracting the fairer sex, certainly seem appealing.