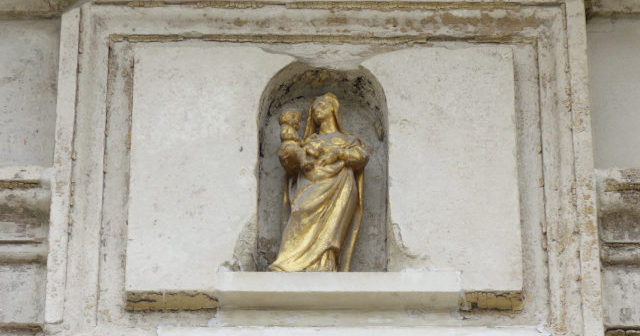 A tiny statue of St. Mary holding baby Jesus lives in an alcove over the door of the Church of St. Mary the Virgin, Aldermanbury. The story of the statue has mostly been a mystery. Photo courtesy of The Fulton Sun.

This is Part Two in a story originally written for The Fulton Sun by Westeryears guest columnist, Fulton Sun Editor Jenny Gray. Read part one here.

For years, countless dignitaries and Westminster students have traveled past a mysterious statue that resides in a niche at the Church of St. Mary the Virgin, Aldermanbury.

Much of her story remains a mystery, but recently, part of her tale has been revealed.

The following is the final piece of a two-part series that sheds new light on the face of St. Mary.

On the receiving end

Obsessed with saving a tiny statue of St. Mary found at the bombed ravaged Church of St. Mary in London, England, Ethel Wood decided to do something about it.

After the bombing, she contacted various people around London, hoping someone could find and preserve the statue. Eventually, when she saw it has been removed from its alcove, she assumed it was safe.

Decades later when she learned the church was going to be moved to Westminster College in Fulton, she wrote a detailed letter to the college.

He was instrumental in bringing the Church of St. Mary the Virgin, Aldermanbury to Fulton.

The modern-era timeline stretched from late 1940 on, and the church lay in rubble for nearly 25 years.

The college was interested in creating something in memory of that monumental event.

Davidson, other Westminster College officials and members of the St. Louis Chapter of the English Speaking Union found a new use for the old Wren church in London.

They had recently seen a Life magazine article about Wren churches slated for demolition in London.

That sparked Horsbrugh’s imagination and he investigated the possibility of saving one of them as that memorial. He visited London and then named the St. Mary Church as the perfect project for the college’s campus.

The removal process began in London in 1965, with workers carefully labeling each of the 7,000 stones and their original placement.

The stones were shipped by boat to Virginia, and then by rail to Fulton where the foundation stone was laid in October 1966.

On May 18, 1965, Horsbrugh wrote back to Ethel Wood’s initial letter written in April.

In it, she recounted a series of dreams describing the origin of the statue and how she subsequently found it at the Church of St. Mary several years later.

Far from discounting her vivid dream, Horsbrugh said her letter was fascinating and he asked Wood for more details.

“May I begin at once by saying how very glad I am that you have taken the trouble to tell us of your extraordinary experience,” he wrote to her. “I regret to confirm that so far, no one has come forward with any information as to the whereabouts of the statue.”

Horsbrugh asked if Wood had any visual recollection of the Italian monastery of her dreams, or if she had ever been to Italy.

He also said there were several officials references to the statue, but none of them stated the material from which it had been made. He also suggested she could consult a psychic.

“You may care to repeat your story to an accredited member of the Society for Psychic Research whose offices I believe to be still in Whitehall and can be discovered from the telephone directory,” he wrote.

In her return letter dated June 16, 1965, Wood declined that suggestion.

“I am not a Roman Catholic, but a member of the Society of Friends (Quaker Movement),” she replied. “I do not care to approach the Society of Psychical (sic) Research, because, like Doubting Thomas in the bible, I do seek to get confirmation of these impressions that one gets. So little as yet is known of mind and dreams.”

Wood also said she had just returned from London after looking at the dismantling of the church.

“Quite a complicated and interesting task it looked, and I do hope I may be spared (sic) to see the photo of the finished building at Fulton,” she wrote.

She added she had inspected the niche where the statue once stood and notice some of the masonry beneath if was broken off and a securing rod cut through with a saw.

“Someone with tools must have done this, and taken time to do it,” Wood wrote.

In this letter, Wood told Horsbrugh she was “on her own” and worked as a shipping clerk for an American firm of office machinery manufacturers.

Once the dreams started, other odd reminders occurred.

“I hesitated for some years to take action, but I can honestly assure you that during that period, I was constantly reminded, either mentally or newspapers, about this church, and I made every effort to forget it.”

Wood had just visited a seaside resort on the English Channel when a newspaper was placed in front of her telling about the Wren church’s removal to Fulton.

A few weeks later, she was at a small market at Hemel Hempstead and she bought a bundle of postcards estimated to be 60 years old. In that bundle was a postcard of the church, which she eventually mailed to Horsbrugh.

“This finally decided me to write to you,” she told Horsbrugh. “I certainly was not allowed in my mind to forget this church and statue. It seems so strange that things should fit in this manner over a period of years.”

When he received the postcard, Horsbrugh approached the publisher.

The image was a painting of the Church of St. Mary by Charles E. Fowler.

The publisher, Raphael Tuck and Sons of London, replied that the original painting and other works by Fowler were destroyed by the German bombing.

Wood ended her letter offering £100 of her hard-earned money to have a new statue of St. Mary created for the church at its new home.

“I should be so pleased to give it for this purpose (to be quite anonymous),” she wrote.

She said she was recently home from another trip to Torquay where she happened to buy an evening newspaper.

“To my great astonishment, there appeared the Church re-erected on a plinth,” she said. “What a coincidence, because I had been wondering what the building would look like. … I have never taken so much interest in a building as in this one, and I am very pleased that this is the one you have chosen to be erected in the United States.”

She also mentioned she been contacted by B. David Stinson, vice president of Westminster College, who told her that her donation would be agreeable.

“I have acknowledged his letter, and the amount has been set aside,” she wrote.

“I know those at Westminster College are most deeply touched by your very generous donation …,” Horsbrugh wrote. “Please accept again my most grateful thanks for your interest in and generous response towards making this exceptional undertaking an outstanding success.”

Their known correspondence ends there, but on Tuesday, more was discovered between other parties.

“I’ve discovered another detail about our statue,” said Tim Riley, executive director and chief curator for the National Churchill Museum who has been exploring the archives there. “There is some additional correspondence between various parties and Mr. Marshall Sisson, the British architect who handled many of the details involving the deconstruction of Aldermanbury in London and its outfitting here in Fulton.”

In Fulton, the Church of St. Mary adorns the National Churchill Museum.

Riley said May 7, 2019 will mark the 50th anniversary of the church’s dedication in Fulton.

In January of 1969, the replacement statue had not yet arrived, and college officials were getting nervous.

They wanted it in place for the May 7 dedication.

Neal Wood, former chair of the Westminster College Board of Trustees and the first Senior Churchill Fellow, had been very much involved in the securing and restoration of the Church of St. Mary, Riley said.

Mr. Wood sent a note to Arthur J. Ayers of Chelsea, London, who was recreating the Madonna statue.

“We do want to have the figure in place well before that date,” Wood urged Ayers.

“It is finished and ready to go, how do you want it sent?” Ayers scrawled back.

Ayers, Riley said, was a gifted carver who was charged with much of the 1960s wood finishings now installed in the church’s interior.

The bill was drawn up a month later in the amount of £114 – 14 British pounds more than the donation from Ethel Wood.

The bill was promptly paid, however.

The little replacement Madonna reportedly was cast in lead, and there was another surprise upon its receipt by Neal Wood.

“The figure which Mr. Ayers did has been received and is very lovely.

We were a bit surprised that it had been gilted entirely. What that your intention?” he wrote to Marshall Sisson.

The gold gilding must have been acceptable, as the statue is mostly still clad in it today.

Riley said he plans to soon crawl up a ladder to inspect the little statue more closely, and help her get any attention she may need.

To this day, the original statue has been missing more than 70 years.

Efforts to find any more information about Ethel Wood have so far proven unsuccessful.

Anyone with information is urged to contact Riley at the National Churchill Museum: Tim.Riley@churchillmemorial.org.