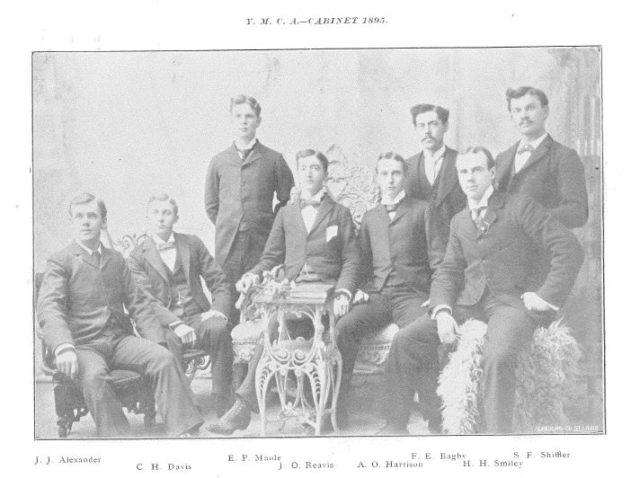 Because Westminster was strongly rooted in the Presbyterian faith at its conception, the founders were as deeply concerned about the spiritual life of the students as they were about their academic lives.  After all, one of the primary objectives of the new school was to prepare young men for the ministry or mission work. Therefore, in addition to the two literary societies, one of the first college organizations was the Society of Religious Inquiry, which met in the northeast corner of the third floor of Westminster Hall for regular Sunday prayer services and meditation.

At the commencement of 1866, the practice began of having a visiting minister come in to start commencement week with a sermon on Sunday evening to the members of the Society.

Then in 1877 a new religious organization, the Young Men’s Christian Association (YMCA), came on the scene with broader goals.  Its mission was “to guard and develop Christian students for Christ, bring unconverted students to Christ, and send out students to work for Christ.”  As a result of the zeal of this organization, many ministers and missionaries did find their calling.

Established because “the uppermost thought of all who come to college should be to develop a strong, manly character,” the YMCA centered its work in three areas: a personal workers class where members could study the Bible in terms of personal work and do personal work among the students; gospel meetings every Sunday afternoon where young men could learn to lead in prayer, conduct meetings, and become trained in Christian work; and access to a reading room with a large library, the best magazines and newspapers, and a missionary library to build interest in mission work. YMCA members also had socials and prayers gatherings throughout the year.

By 1879 the Society of Religious Inquiry had been absorbed into a local chapter of the YMCA, and the organization really came into its own. Members would meet new students at the train station when they arrived to help them get settled in and acclimated. An informal social hour was held the first week of the semester so that new students could meet people. Sunday afternoon prayer meetings took place in that same third-floor room in Westminster Hall. And students performed a wide range of service projects both on campus and outside the College.

One of the student members who answered the call to the ministry was Addison A. Wallace. He remembered later in his life “the warm atmosphere of faith which was evident in the life of the College. The faculty was made up of men who held fast to ‘the things most assuredly believed among us.'” Wallace was particularly impressed with Rev. William H. Marquess, Class of 1873 and minister of the Fulton Presbyterian Church, whom he described as a “potent personality, surcharged with intense zeal, and fired by missionary fervor, moved like a guiding star in the firmament of College life and directed many a young heart toward its ‘high calling in Jesus Christ.'”

In fact, at this time a student’s Sundays were totally devoted to the feeding of the soul: the day began with Sunday school and morning workshop at the local Presbyterian Church. Then in the afternoon, he went to YMCA prayer meeting for Bible study, prayer, and testimony. This was followed by a service of gospel singing and testimony at city hall and small gatherings to pray for the unconverted in students’ homes. In the evening, students returned to church for evening worship.

Every day for the rest of the week students attended required chapel services conducted by faculty at eight in the morning.

During the first decade of the 20th century, the bonds between Westminster students and their spiritual life became stronger. By the end of 1901, three-fifths of the student body were YMCA members, a larger percentage than any other Missouri chapter. A delegation of 26 from Westminster attended the state convention that year and a number of them provided leadership roles. The Westminster chapter sponsored three Bible and two mission classes that year, and four members organized a mission Sunday school for 20 underprivileged children which met on Sunday afternoons. That summer eight Westminster delegates went to the annual YMCA conference in Lake Geneva, Wisconsin, and three attended the Student Volunteer Convention in Toronto the next February.

Out of these national meetings grew the Westminster Living Link League, which organized March 9, 1902, and raised enough money to sponsor A. B. Dodd, ’98 as a missionary in the field. He went to China as a medical missionary and sent letters back to the faithful on campus that were printed and widely distributed, inspiring many Westminster men to join both the League and YMCA and eventually assume missionary service.

By 1908 the YMCA had grown so strong that its members had aspirations of raising the funds for their own building, but that never happened. The group did undertake a new project to help new students—publishing a handbook which was distributed at fall mixers that told the new arrivals about the work of the “Y” and other groups, Westminster traditions, and services available to them downtown.

The next year, when Westminster President Kerr was trying to identify student employment around town (because a large number of prospective students said they would come to Fulton if they had jobs), the YMCA established an employment bureau. The fall of 1909 also brought the destruction of Westminster Hall by fire, so the traditional YMCA’s new student reception and orientation meeting that year had to be held in a makeshift alternative location. According to one student reporter’s account: “With a banana and cooky in one hand and a cup of lemonade in the other, no one could look sour; but everyone laughed and became acquainted with his neighbor.”

When Westminster was swamped with an unanticipated influx of students taking officers training as a part of the Students Army Training Corps contract for World War I in the fall of 1918, the “Y” pitched in wholeheartedly, helping to find rooms in town for 222 new men, establishing a reading room with free stationary for them, organizing Bible classes in the barracks, holding a welcoming social event and weekly entertainments with the “Willies” from William Woods, and opening the “Y Hut” where the trainees could get, as the Parrish history describes, “everything from coffee and mince pie to cigarettes and bachelor-buttons.”

Following the war, the influence of the “Y” weakened as more organizations were established and grew on campus. However, it regained a much stronger presence in September 1932, when, after 23 years of moving from location to location, the group was given a permanent home in the north area of the basement of Westminster Hall. The members obtained a rostrum, pews, and chairs from the local Episcopal Church and dubbed it the “Oratory.”

Slowly, the missionary goals of the YMCA diminished as well, and by the early 1940s, the discussions were more focused on social involvement than theology. By the end of World War II, the “Y” as well as the two literary societies that were the first organizations on campus gradually disappeared.

In the fall of 1947 Professor John Gates started the Student Christian Association to partner with the YMCA; however, their activities were confined to working with local children and Sunday evening fellowships with the YWCA at William Woods.

By 1853 the Westminster YMCA chapter had ceased to exist, replaced by the Westminster Fellowship, a joint program with William Woods which sponsored a Fireside Hour on Sunday evenings and study programs.

Then in the fall of 1950, the office of college chaplain was created. Required weekly chapel services continued until the spring of 1965 when this practice gave way to weekly forums.

Today Westminster provides a vibrant spiritual life for its students through the work of the College Chaplain and the Chaplain Resident in a real, permanent home that would have been the envy of “Y” members–the Center for Faith and Service.  A weekly community hour is held every Thursday morning on spiritual and ethical issues, a community worship service takes place once a month as well as worship services for major holy days for students of the various religions represented on campus, a weekly meditation group meets, diversity dialogues are held, and a wide range of Interfaith programs are planned every year.

While the Presbyterian roots which began Westminster have never been forgotten, Westminster religious life now represents the real world with its diversity of religious programs represented and the ethical issues it tackles.

Learn more about spiritual life at Westminster here, and dive deeper into Westminster’s history with Westeryears.