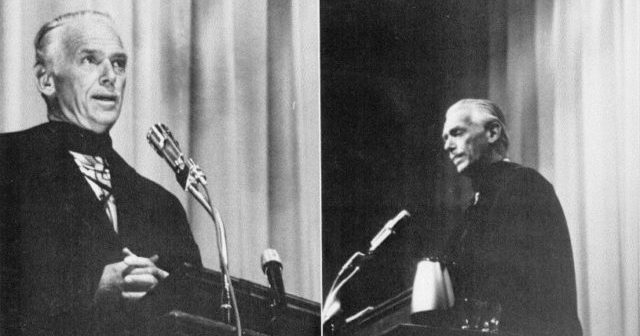 Westminster has certainly had a long and impressive list of famous people and dignitaries who have visited the campus to speak, but one of the more unique choices was the 1966 commencement speaker…unique because he readily admitted in his address that he was not “an example of the merits of a formal education” and that what education he had acquired was “spotty and lop-sided.”

Douglas Eton Fairbanks, Jr., actor, writer, and decorated naval officer of World War II (December 9, 1909-May 7, 2000) KBE, DSC, was the only child of the swashbuckling silent screen legend of such films as “Robin Hood” and “The Mask of Zorro,” Douglas Fairbanks, Sr.

His famous father and mother, Anna Beth Sully, divorced when Fairbanks, Jr. was nine, and both remarried. Although he was raised by his mother, because he was the son of Hollywood royalty, he was given a contract at Paramount Studios at the age of 14 and went on to star in such great movies as The Dawn Patrol (1930), Little Caesar (1931), The Prisoner of Zenda (1937) and Gunga Din (1939).

So how did a Hollywood film star with no real formal education come to be the commencement speaker at Westminster College on June 6, 1966, and receive an honorary doctorate of fine arts? Only College Historian Dr. Bill Parrish would have the inside scoop.

“Dave Stinson, who was Vice President for Development at the time, was in New York on business and happened to be stopped on the street and asked to appear on the television quiz show, “What’s My Line?” Dr. Parrish recalls. “Fairbanks happened to be the guest panelist that day, and Dave, who was quite an extrovert, engaged him in conversation afterward, and the invitation to speak at commencement grew out of that conversation.  It was while the Churchill Memorial was being completed, and Fairbanks had strong British connections so I’m sure his curiosity about that entered into it.”

Champ Auditorium, where commencement was held, was so new that temporary wooden steps had to be put in place for faculty and dignitaries to follow the flag-bearing marshals into the building.

During these commencement exercises, 83 graduating seniors listened to the witty Fairbanks offer advice centered on the theme “Keep the Flame of Youth Alive.”

Speaking about his lack of education, Fairbanks said: “One of the few times in my life when I felt better about this lack was when, as a young man, I had lunch with the great Professor Einstein and later caught him adding up his check on his fingers.”

A sign of turbulent mid-sixties era came when Fairbanks said: “the right to protest, to change, to reject the idea that any answer to any question is ever final, is not only in order, but is sanctified in the constitutions of our democracies everywhere—and nowhere is it more energetically practiced than in our own United States.”

Fairbanks took the graduating class through his personal journey that brought him to the conclusion that learning was a lifelong pursuit. “The more I failed to remake the world as I thought it ought to be, the more interested I became in why,” he said. “After all, knowledge is bred from the words ‘why’ and ‘how.'”

He discussed how two world wars and a great depression and communication revolutions of press, radio, television, and computers changed the world on a scale without precedent.

His advice to graduates in the speech included:

Fairbanks last words of wisdom to the class were: “My last wish is that you will consciously try your best to keep the flame of your youth bright—even into later years, as that others, coming after you, may find their way and warm themselves by your light.”

Those who were in attendance at Fairbanks address described it as “notable for its freshness, good humor, and poetic inflections.”

Thus Hollywood and Westminster met…and both were richer for the encounter.