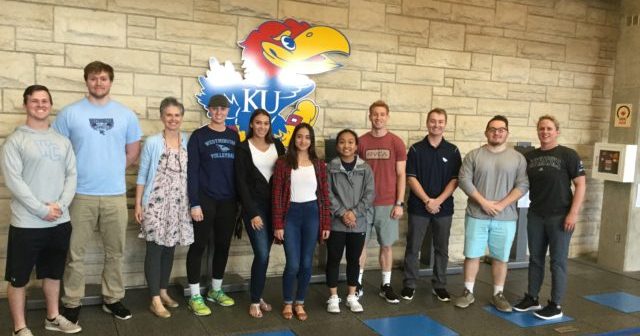 A  group of Westminster students traveled with Dr. Therese Miller, Director of Health and Exercise Science at Westminster College, to the University of Kansas in Lawrence, KS to tour the KU Sports Performance Center.

Tour guide for the visit was Andrea Hudy, a nationally acclaimed sport performance coach and author.

Since her arrival at KU, Hudy has handled the strength and conditioning responsibilities for the KU men’s basketball team.

Hudy oversees the Anderson Strength and Conditioning Complex for all KU sports.

In the summer of 2014, her first book, Power Positions, was published.

Including the 19 Jayhawks that have been drafted in the National Basketball Association, she has worked with 39 former student-athletes who went on to play in the NBA.

Hudy came to Kansas after nine-and-a-half years at the University of Connecticut, where she worked closely with the Huskies’ national champion men’s and women’s basketball teams.

The  Westminster group’s visit to the KU Sports Performance Center was followed by a tour of MU Exercise Physiology labs, participating in DEXA and Biopod body composition measures and ultrasound measures of arterial blood flow.

One of the students on the trip told Dr. Miller: “It was the best field trip I’ve been on. Thank you for taking us.”

Click to learn more about majoring in Health and Wellness or Exercise Science at Westminster.