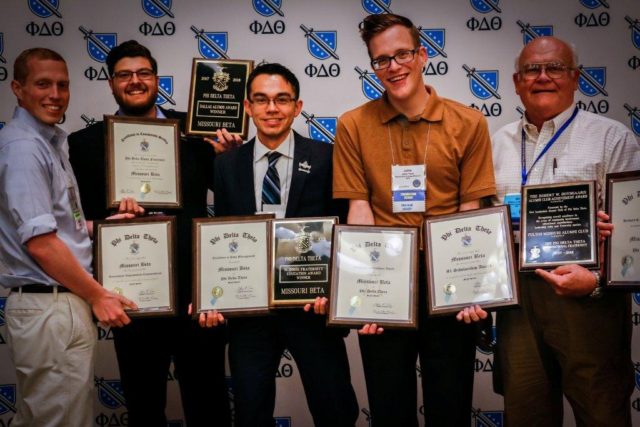 The fraternity continued its winning streak this summer by receiving numerous awards June 21-23 at the Biennial National Convention of the Phi Delta Theta International Fraternity in San Antonio, TX.

Convention awards included the Gold Star Chapter Excellence Award, recognizing the chapter for ranking in the top 10 percent of all Phi Delt chapters.

According to Chapter Home Association President Bill Whitlow, ’69, from Fulton, MO, Missouri Beta Chapter received the award on the basis of a number of factors, including its chapter operations, finances, scholarship record, pledge and member education, community service activities, and philanthropic works.

The fraternity also was among other Phi Delt chapters that received the following awards: Number 1 in Grades – for a chapter with the highest grades among all fraternities on its campus – Excellence in Community Service, Excellence in Risk Management, the Biggers Ritual Award, and the Excellence in Recruitment and Initiation Award.

The chapter was unique in being the only one to receive the Dallas Alumni Award and the St. Louis Education Award.

Whitlow, who also serves as Secretary and Treasurer of the Fulton Missouri Phi Delta Theta Alumni Club, adds that the recent Missouri Beta awards are the result of refined chapter goals that took place beginning in 2012.

“The pledges initiated that year decided they would not tolerate being a fraternity that said they were doing the right thing but were actually just another stereotypical fraternity,” he explains.

In 2013, the fraternity eliminated all alcohol from the house. Today, Missouri Beta Chapter hires third-party vendors for formals and other off-site events, allowing alcohol only in the hands of those who are of legal drinking age. Whitlow says any trace of hazing also was eradicated.

“Pledgeship is now transparent, constructive, and designed to develop good fraternity members and leaders for the chapter and the campus,” Whitlow says.

Newly elected President Samuel Studer, a junior from Columbia, MO, agrees with Whitlow’s assessment of the fraternity and says the recent slew of Phil Delt awards is the result of true brotherhood.

“We strive to be an ideal, not only for Greek life, but for the greater Westminster community, as a socially conscious and academically responsible organization.” he says.

The Spanish Translation and International Business major adds that the various strengths awarded at this year’s convention highlight why Missouri Beta Chapter feels like home away from home to him.

“They say home is where the heart is, and while school will never replace my real family, Phi Delt has certainly been something of a refuge,” he says.

Studer currently finds himself back at that refuge with his fellow Phi Delt brothers in preparation for the new semester. Classes start August 23.